The White House announced late Monday that President Trump will nominate Neil Chatterjee and Robert Powelson to FERC, with each to complete the incomplete terms of former commissioners, in a move that would reconstitute a quorum at the regulatory panel. 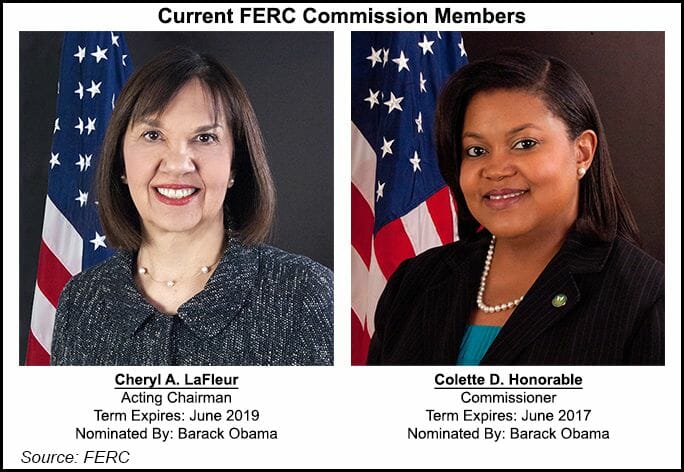 Trump said he intends to nominate Chatterjee, a longtime energy policy adviser to Senate Majority Leader Mitch McConnell (R-KY), for the term expiring June 30, 2021, that was previously held by Tony Clark, who left the Federal Energy Regulatory Commission last September. Prior to serving McConnell, Chatterjee worked as a principal in government relations for the National Rural Electric Cooperative Association and as an aide to House Republican Conference Chairwoman Deborah Pryce of Ohio. Chatterjee is a graduate of St. Lawrence University and the University of Cincinnati College of Law.

Powelson, a member of the Pennsylvania Public Utility Commission, will be nominated for a term expiring June 30, 2020, that was previously held by Philip Moeller, who left FERC in October 2015. He serves as the president of NARUC, and on the Electric Power Research Institute Advisory Board and the Drexel University Board of Trustees. Powelson is a previous CEO of the Chester County Chamber of Business and Industry, based in Malvern, PA. He is a graduate of St. Joseph’s University and the University of Pennsylvania.

Both men had previously been reported as potential candidates for FERC. Their nominations will need the approval of the Senate Energy and Natural Resources Committee and the full Senate before they can take their seats at FERC, a process that could take several months.

Don Santa, CEO of the Interstate Natural Gas Association of America, urged the Senate to act expeditiously on the nominations.

“The president, and many members of Congress, have stressed the economic importance of developing infrastructure across America. Natural gas pipelines are a form of infrastructure built with private capital, rather than government funds,” Santa said.

“We estimate that about $15 billion of shovel-ready, natural gas pipeline projects are stranded on the sidelines because FERC’s lack of quorum prevents the commission from acting on major energy projects. To build this infrastructure, we need a functioning FERC to act on pending natural gas infrastructure projects of national importance. The nomination of these individuals to serve at FERC will mark a step toward improving the nation’s energy infrastructure.”

Chatterjee and Powelson “are exceptionally well-qualified to serve on the Commission,” said Dena Wiggins, CEO of the Natural Gas Supply Association. “Together, they bring a wealth of experience in different regulatory aspects of the energy industry. We hope the Senate will move expeditiously to confirm these nominees and bring FERC back to the necessary quorum to act on natural gas infrastructure projects.”

The nominations come less than a week after Energy and Natural Resources Chairman Lisa Murkowski (R-AK) and Ranking Member Maria Cantwell (D-WA) expressed their frustration at the continuing lack of a quorum at FERC. Dozens of members of the House of Representatives, including members of the House Committee on Energy and Commerce, have called on Trump to prioritize the nomination and confirmation of commissioners. Some environmental groups have objected to those letters, saying they’d rather see FERC remain without a quorum.

The Senate Energy and Natural Resources Committee will schedule a hearing on the nominations “as soon as we receive formal nominations and the proper paperwork,” a Murkowski spokesperson told NGI Tuesday.

There are currently three empty seats at FERC and the expected exit of Colette Honorable at the end of June will leave the ostensibly five-member panel with a single member — Acting Chairman Cheryl LaFleur.

The logjam at FERC began days after Trump’s inauguration, when he named LaFleur acting chairman and Norman Bay, who had been at the helm since April 2015, submitted his resignation.

There is some question about the likelihood of LaFleur remaining at the helm at FERC, since she is a Democrat and Trump and his nominees are Republicans. There have been reports that Trump plans to nominate Kevin McIntyre, an attorney with law firm Jones Day, to FERC and install him as the new chairman. McIntyre currently serves as co-head of the firm’s global energy practice.

By law, no more than three members of FERC may be from the same political party.

Regardless of who the nominees are, commissioners “must recognize the threat coal and gas pose to our climate, health, and communities,” said Sierra Club’s John Coequyt.

“For too long, FERC has merely served as a pit stop for the fossil fuel industry on its way to constructing dirty energy infrastructure, rather fulfilling their duty to adequately investigate the need for projects and the dangers they pose. This cannot continue,” Coequyt said.