President Trump signed a memorandum effectively promoting hydraulic fracturing, aka fracking, amid a weekend of barnstorming through Pennsylvania ahead of Election Day. He capitalized on the symbolic missive to amplify his backing of the natural gas extraction technique used in the state’s Marcellus Shale – part of a bid to shore up support in the key swing state. 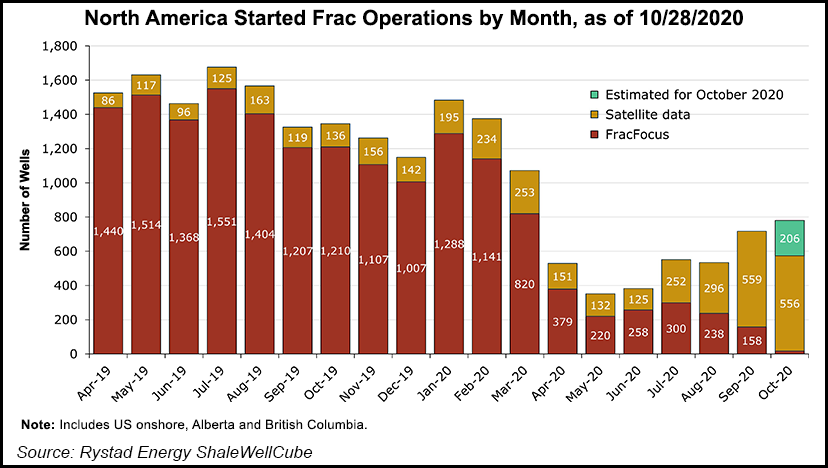 Trump ordered Energy Secretary Dan Brouillette to examine and, within 70 days, report on the ramifications of a fracking ban, including potential job losses, decreased tax revenue and impacts on consumer energy prices. On the campaign trail, Trump claimed his challenger Joseph R. Biden Jr.  has promised a fracking ban should the Democrat wrestle the presidency away from Trump after Tuesday’s vote.

“Biden’s plan is an economic death sentence for Pennsylvania,” the president told supporters near Pittsburgh over the weekend. “He will outlaw fracking and eradicate your great economy.”

The former vice president said he has not advocated for a fracking ban but rather pledged to end new drilling on federal land. Currently, only about 10% of drilling is done on public property, and the bulk of that work is in western states, not Pennsylvania.

Trump also mischaracterized Biden’s $2 trillion infrastructure and clean energy plan to address climate change, saying the Democrat wants “no heating in the winter, no air conditioning in the summer.”

With polls showing a tight race in Pennsylvania – and analysts largely in agreement that Trump needs to carry the state, as he did in 2016, to win a second term – Biden also stumped there over the weekend and again on Monday. He focused largely on what he called Trump’s poor management of the coronavirus pandemic, noting large outbreaks and rising death tolls across the nation’s midsection.

Biden’s campaign did dismiss Trump’s fracking memo as a political stunt. Additionally, in the presidential debates in October, Biden emphasized a multi-decade transition away from fossil fuels to renewable sources of energy. His goal is to decarbonize the electric power sector by 2035 and eliminate U.S. greenhouse emissions by 2050. Between now and then, however, natural gas would play a significant role in the country’s energy infrastructure, Biden has said.

Trump, in contrast, has largely dismissed the importance of climate change and instead vowed to keep pushing a deregulatory agenda – a hallmark of his first term.

Industry proponents heralded the importance of fracking in the wake of Trump’s order.

“Thanks to fracking, America is leading the world both in energy production and emissions reductions and is less dependent on foreign energy sources,” American Petroleum Institute CEO Mike Sommers said. “We welcome further analysis to detail the important benefits of fracking, and we will continue to advocate for policies that advance this game-changing technology, including on federal and private lands.”

North American fracking reached a 2020 high of 780 started jobs in October, marking a substantial recovery from the lows below 400 jobs touched in May and June amid the initial fallout of the pandemic, said Artem Abramov, Rystad’s head of research.

The analysis comes on the heels of the latest Baker Hughes Co. data, which showed that the U.S. oil rig count increased by nine units to 296 for the week ending Oct. 30 – the seventh straight week of additions. The industry gained more than 40 units from a recent low of 254 recorded for the week ending Sept. 11.

The recent fracking and drilling rally “was triggered by the stabilization of oil prices in the third quarter, but many operators also fast-tracked permitting processes on federal acreage” as the election neared, with onshore operators bracing for the potential of new rules should Biden win, Abramov said.

“While most operators – already dealing with an unprecedented dislocation in the oil market – are unlikely to immediately alter their operating schedule, the outcome of the elections may compel them to review their capital allocation plans in the future, especially if the industry faces greater restrictions or regulation,” he added.