President Trump took credit for an “energy independent” United States and a fairer trade relationship with Mexico and Canada during his State of the Union address Tuesday. 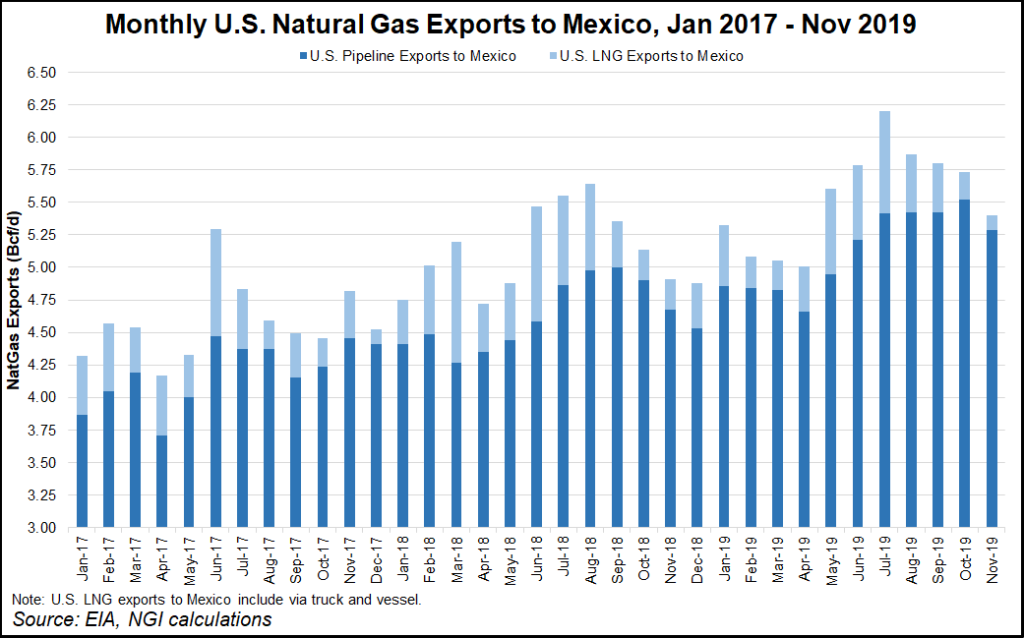 “Thanks to our bold regulatory reduction campaign, the United States has become the No. 1 producer of oil and natural gas anywhere in the world, by far,” Trump told legislators.

He added, “With the tremendous progress we have made over the past three years, America is now energy independent. And energy jobs, like so many elements of our country, are at a record high.”

The United States became a net natural gas exporter on an annual basis for the first time in 2017, while September 2019 was the first recorded month for which the country was a net exporter of crude oil and petroleum products. Mexico is the leading destination for U.S. exports of natural gas, gasoline, fuel oil and total refined products, according to the Energy Information Administration (EIA).

Mexico energy ministry Sener said this week that continued investments in Mexico’s natural gas infrastructure will allow it to take advantage of “the cheapest gas in the world” from the United States.

Notwithstanding the unprecedented growth in production and exports, the United States imported about 9.94 million b/d of petroleum from nearly 90 countries in 2018 to cover domestic demand, and about 7.9 Bcf/d of natural gas, mostly via pipeline from Canada.

Mexico, meanwhile, was the third-largest supplier of gross petroleum imports into the United States in 2018, behind Canada and Saudi Arabia.

While domestic hydrocarbon output has indeed reached record highs because of advances in horizontal drilling and high-volume hydraulic fracturing, the production surge was well underway by the time Trump took office in January 2017.

The United States surpassed Russia in 2011, during President Obama’s first term in office, as the world’s largest natural gas producer, and overtook Saudia Arabia in early 2018 as the leading producer of crude oil, according to the Energy Information Administration (EIA).

In terms of petroleum production, which includes crude oil and lease condensate, natural gas plant liquids (NGPL) and biofuels, the United States has been the world’s top producer since 2013.

Under Trump, oil output has risen to 13 million b/d from 8.86 million b/d in January 2017 as of last month, a 46.7% increase. However, EIA is forecasting nearly flat production growth from seven of the Lower 48’s main unconventional plays in February.

Trump also highlighted the United States-Mexico-Canada-Agreement (USMCA), an updated version of the North American Free Trade Agreement, or NAFTA, that he signed into law last week, as a notch in his belt.

“One of the biggest promises I made to the American people was to replace the disastrous NAFTA trade deal,” Trump said. “In fact, unfair trade is perhaps the single biggest reason I decided to run for president.”

The USMCA will “bring trade with Mexico and Canada to a much higher level, but also to a much greater degree of fairness and reciprocity, we will have that… I say that finally, because it has been many years since we were treated fairly on trade,” Trump said.

Trade policy has been among the main drivers of tension between Trump and Mexico President Andrés Manuel López Obrador, commonly known as AMLO, who succeeded Enrique Peña Nieto in December 2018.

As it relates to energy, the USMCA largely maintains the bedrock provisions of NAFTA, including the tariff-free flow of energy products between North American countries, and the investor-state dispute settlement provisions from NAFTA’s Chapter 11 for the energy sector.

“It is evident that a major objective of this coverage, which was accepted by the then-incoming AMLO administration as well as the Trump and Peña Nieto administrations, is to give American petroleum and natural gas investors a strong sense of confidence in Mexico,” the Baker Institute for Public Policy’s David A. Gantz, Will Clayton Fellow in Trade and International Economics at the Institute’s Mexico Center, wrote in a September 2019 report on the USMCA and its implications for Peña Nieto’s 2013 market-opening constitutional energy reform.

The reforms, Gantz said, “if and only if they are supported by AMLO, offer Mexico an opportunity to re-energize its declining petroleum sector by encouraging foreign oil companies, including but not limited to those located in the United States, to go forward with their investments and exploration…”

Despite the legal constraints imposed on López Obrador vis-a-vis energy policy by the USMCA, “it is still possible that AMLO, who distrusts the energy overhaul and has a supermajority in the Mexican Congress, could seek to roll back the Peña Nieto administration’s energy reforms,” Gantz said.

The major U.S. oil and gas trade groups largely expressed alignment with Trump’s address, while stressing the industry’s commitment to safety and protecting the environment.

American Energy Alliance President Thomas Pyle also weighed in. “In terms of great comebacks, it’s impossible to overlook the American energy story…But this comeback story is far from over. In order to achieve true energy dominance and unlock our nation’s full potential, President Trump must have the courage to do what Congress has failed to do for decades. In the next year and beyond, President Trump must provide Congress with a blueprint to fix our broken, abused, misused and outdated environmental laws.”