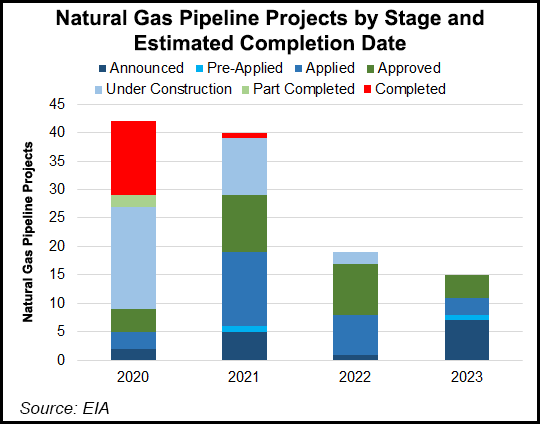 The final rule would modernize environmental reviews, streamline infrastructure approvals and “reverse years of burdensome overregulation and administrative abuse,” according to the White House.

The administration unveiled an overhaul in January that would strip constraints on constructing natural gas and oil pipelines, power plants and other major infrastructure projects from NEPA, which touches almost every significant infrastructure project in the country. NEPA requires thorough impact assessments of major projects and allows the public to weigh in before a shovel is allowed to break ground.

The White House proposal would narrow NEPA oversight using a new “nonmajor” category, and redefine a “major federal action” to exclude privately financed projects with minimal government funding or involvement. Federal agencies would effectively be given a green light to approve major infrastructure projects with limited oversight. It would be less cumbersome to build most pipelines overseen by federal authorities.

The NEPA revamp, however, would not directly impact state oversight of infrastructure. Two-year deadlines for environmental impact statements (EIS) would be mandated, and pages included in the reviews would be limited. Also proposed to be scaled back is the definition of cumulative environmental “effects,” which could make it more difficult to include climate impacts in an analysis.

“These NEPA updates will make the federal permitting process more predictable and transparent,” said U.S. Chamber of Commerce CEO Tom Donohue. “It will establish timelines for a decision and make requirements more straightforward. Ultimately, this new rule is not about the outcome of permit applications, but the process and time it takes to get to a decision.”

There was also criticism for the final rule.

“The administration thinks this would be good for the economy but they have it backward,” said New York Department of Environmental Conservation Commissioner Basil Seggos. “Thorough environmental review actually strengthens local economies and jobs by ensuring the resiliency and durability of our infrastructure. Environmental review also provides important protections for low-income communities and communities of color that have borne the brunt of pollution — the same communities most impacted by the coronavirus and most at risk from climate change.”

The NEPA rollback came just one day after Trump’s presumed Democratic opponent in his bid for re-election, former vice president Joseph R. Biden Jr., unveiled a $2 trillion climate change and infrastructure plan targeting a carbon pollution-free power sector by 2035. Biden is aiming for the U.S. economy to achieve net zero carbon emissions by 2050 by decarbonizing the power sector, retrofitting and rebuilding the country’s infrastructure, and accelerating the deployment of electric vehicles.