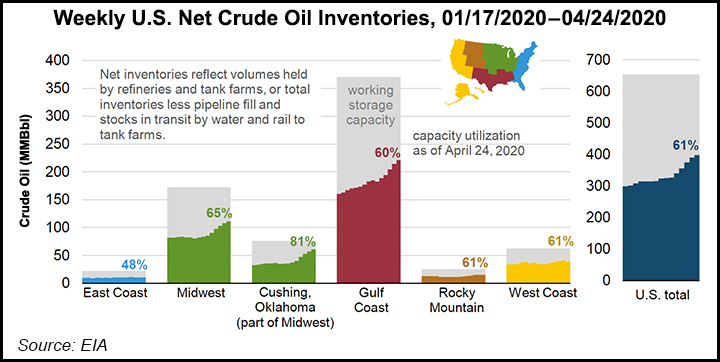 “We’re not going to let our oil companies go and get in trouble,” Trump said at a roundtable of corporate leaders at the White House. “It’s not their fault that they got hit by 50% less volume in one day…

“We’re saving other companies and industries…I think the oil industry is one of the top on the list.” A plan is likely to be announced “shortly,” Trump said.

Last week, Trump instructed Treasury Secretary Steven Mnuchin and Energy Secretary Dan Brouillette “to formulate a plan which will make funds available so that these very important companies and jobs will be secured long into the future,” referring to the oil and gas industry.

A dedicated team composed of officials from both the Department of Treasury and Department of Energy (DOE) are “looking at a lot of different strategies,” Mnuchin said at the roundtable.

The potential plan was part of a discussion Brouillette and Sen. Kevin Cramer (R-ND) had Tuesday with members of the North Dakota Petroleum Council. The proposal could include bridge loans for ailing energy companies, Brouillette said.

“North Dakota’s oil and gas producers provide thousands of good paying jobs and contribute to our national security, but Covid-19 and the oil price ware has created a lethal combination aimed at this sector,” Cramer said. “With President Trump directing his administration to craft an oil and gas industry support plan, there is no better place to look for solutions than the North Dakotans on the front lines of this fight.”

In March, Trump ordered DOE to purchase 77 million bbl of U.S. crude to fill the Strategic Petroleum Reserve to its maximum capacity. Mnuchin said DOE is “being paid for the storage capacity in oil,” and the agencies are “exploring potentially having the ability to store another several hundred million barrels.”

The Labor Department on Thursday reported 3.8 million new jobless claims in the week ending April 25, bringing the total to 30.3 million since the coronavirus shutdown began six weeks ago.