Canada’s vast oil and natural gas resources would be foolish to ignore, but they can successfully be developed even as society works toward reducing carbon emissions and building a renewables arsenal, Canadian Prime Minister Justin Trudeau said Thursday night in Houston. 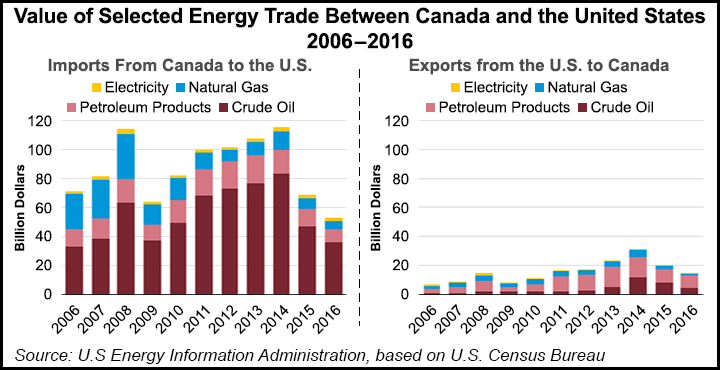 Trudeau, who has led Canada for 16 months, used a charm offensive to press his case that the energy industry can successfully coexist with environmental goals before an audience of 1,200 at CERAWeek by IHS Markit. Throwing shade at the Trump administration, the youthful leader praised immigration, criticized a proposed border adjustment tax (BAT) and pushed for pricing carbon emissions. The audience responded with cheers, applause and more than one standing ovation.

“Here’s the crux of it: In Canada, we know all about preparing for winter and the long, cold nights. When we go camping — and we do love to camp, that’s one stereotype that is totally accurate, by the way — we light our campfires before the sun goes down. That doesn’t make us anti-daylight.”

Trudeau was in Houston to receive CERAWeek’s Global Energy and Environment Leadership Award in recognition of his commitment to sustainability in energy and the environment.

“We would not be on this path — not even close — had we not insisted that environmental protection and resource development go hand in hand,” Trudeau said. He said previous plans to guide Canada down a righteous path of energy security only “failed because, in the 21st Century, Canadians will not accept that we have to choose between a healthy planet and a strong economy. People want both. And they can have both. It takes compromise. It takes hard work. But it is possible.”

Trudeau’s government has made progress on expanding energy infrastructure and on a national carbon reduction plan, which is being hammered out by the provinces.

“Let me be very clear: We could not have moved on pipelines had we not acted on climate,” he said. “And we could not have acted on climate, had we not also focused on jobs, that is on the economic needs of the Canadian people — especially the middle class, and those working hard to join it. We are showing not only that it can be done, but that it must be done. That this is the way forward that people expect.”

Lessons From His Father

When Trudeau began his run for the leadership in 2012, 30 years after his father Pierre Elliott Trudeau served as prime minister, “I knew that there is no path to prosperity in Canada that does not include a thriving, vibrant energy sector — both traditional, and renewable.”

As “cold-weather dwellers,” Canadians agree on the importance of energy, he said. When he launched his bid in 2012, he went to Calgary to meet with leading energy executives.

“I think quite a few people, including quite a few in my own party, thought I was crazy. But, guess what? A little over four years later, with a number of strong Trudeau Liberals successfully elected across Alberta, we’re on our way to getting three new pipeline projects under way, which will help connect Canada’s oil patch with energy markets around the world.”

Kinder Morgan Inc.’s Trans Mountain Pipeline, to carry oilsands volumes to British Columbia for export “will run from Alberta, across the Rockies to the Pacific. The second, TransCanada’s Keystone XL pipeline, recently approved by President Trump, will ship Canadian crude to refineries here in Texas. And Enbridge’s Line 3 replacement will also come south,” replacing 996 miles of pipe from acentral Alberta storage and loading hub at Hardisty to a Wisconsin counterpart at Superior.

The projects “will go a long way toward ensuring North American energy security for years to come,” Trudeau said. As if to stress the point, Trudeau’s government on Friday green lighted Nova Gas Transmission Ltd.’s Towerbirch expansion, a C$439 million natural gas project that includes two pipeline sections and associated facilities in the Montney formation, which extends across northwestern Alberta and northeastern British Columbia. The National Energy Board had approved the project last October.

The prime minister on Thursday night also repeated something he has stressed before, drawing a standing ovation.

“No country would find 173 billion bbl of oil and just leave it in the ground. The resource will be developed. Our job is to ensure this is done responsibly, safely and sustainably.”

Trudeau touted the historical — and economic — energy trade connections between the United States and Canada and urged the partnership continue unabated.

“Nothing is more essential to the U.S. economy than access to a secure, reliable source of energy,” he said. “Canada is that source…We have the third-largest oil reserves in the world and provide more than 40% of America’s imported crude.” Beyond oil and gas, Canada supplies the Lower 48 states “with more electricity and uranium than any other country, too.”

Even as more infrastructure is in the works, the Trudeau government has heeded environmental interests. In November the government sped up the country’s planned elimination of coal, with a promise to phase out traditional coal-fired power by 2030.

“While developing our resources for the economic benefit of Canadians, we must also look to the future,” Trudeau said.

Meshing energy resource development with environmental goals is not easy, but he said it’s imperative.

Canada is “trying to have it all…We’re trying to make sure that yes, we are being climate leaders and we are also moving forward on pipelines, which, quite frankly, are a hell of a lot safer and less polluting than oil-by-rail, for example.”

The White House and some members of Congress have proposed making over the U.S. tax system to include a BAT, which basically would give U.S. exports a break while imposing harsher penalties on imports. That proposal would cause more problems than it’s worth, said the prime minister during a question-and-answer session led by IHS Markit Vice Chairman Dan Yergin, the conference chair of CERAWeek.

“Anything that creates impediments at the border is something to be concerned with,” Trudeau said. As an example, he cited the “level of regulations” for something as innocuous as an auto part. “A part might track back and forth across the border six or seven times. If you’re counting on bean counters to track each trip, you’re going to hurt the economy.” Looking at the audience he said, “You can applaud against the border adjustment tax.” It did enthusiastically.

During another light moment, Yergin asked Trudeau about his recent meeting with President Trump.

“We’re Canadian,” Trudeau said. “We get along with everybody.”

As the Trump administration is appearing to bring the United States into a more insular posture and pulls back from globalization, Trudeau reflected on the reasons why. The middle class, he said, has not felt the positive effects of global growth.