Tropical Storm Nicholas, which moved onshore Texas early Tuesday, has temporarily shut down the Freeport liquefied natural gas (LNG) terminal south of Houston, and is projected to sweep over all of the Gulf Coast’s major export facilities in the coming days. 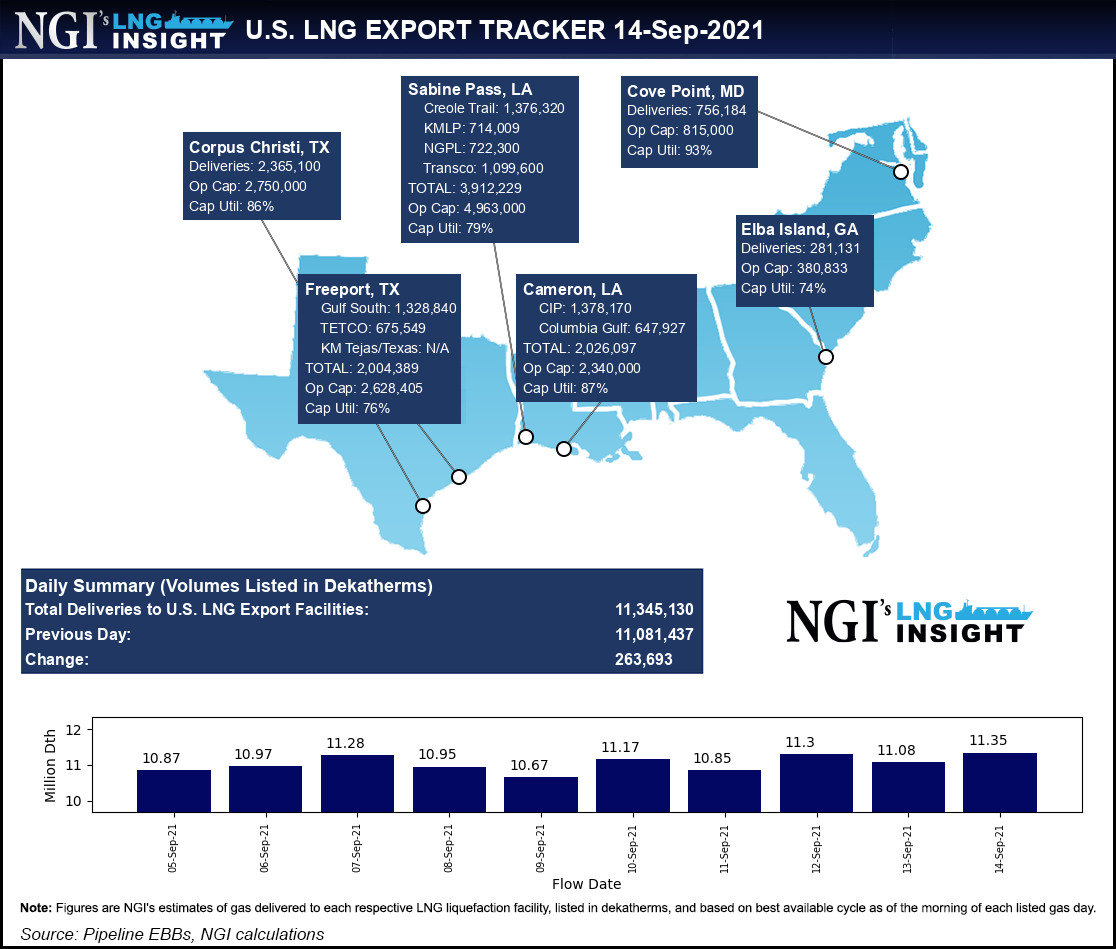 The storm’s turn toward Louisiana may threaten exports at a time when the global gas market is at a breaking point. Record high prices in Europe are nudging the continent closer to an energy crisis, and prices in Asia continue to climb.

Freeport spokesperson Heather Browne said early Tuesday all three of the terminal’s liquefaction trains were offline, “likely due to power issues related to the storm.” She added that “we continue to assess everything. There is no other facility damage to report at this time.” Located on Quintana Island near Freeport, which is about 70 miles south of Houston, the terminal receives power from the Electric Reliability Council of Texas grid. Widespread power outages were reported across the Houston metropolitan area on Tuesday.

Nicholas was expected to become a tropical depression by Tuesday night, the National Hurricane Center (NHC) said. Heavy rainfall was expected to bring the threat of flooding, with five to 10 inches possible from the upper Texas coast into central and southern Louisiana, southern Mississippi and southern Alabama. Isolated storm totals of 20 inches were forecast across central to southern Louisiana through the end of the week, according to the NHC.

Both the Sabine-Neches waterway and Calcasieu Ship Channel that serve the Sabine Pass and Cameron LNG terminals were closed Tuesday. Two LNG vessels were docked at Freeport, one at Corpus Christi LNG and another at Sabine Pass LNG on Tuesday, Kpler analyst Matt Smith told NGI’s LNG Insight.

There were no vessels at Cameron LNG in Louisiana. Cameron spokesperson Anya McInnis said the terminal has taken preparations, but she added that since the weather system appears to largely be a rain event, no operational impacts are expected. Cheniere Energy Inc. also said its Sabine Pass and Corpus Christi terminals were not impacted by Nicholas and continue to operate normally.

Feed gas deliveries to Gulf Coast terminals were not impacted by the storm, and nominations appeared steady during the morning cycle on Tuesday at all of the plants, according to NGI data.

“Nicholas can disrupt the intended path of LNG vessels, but any disruptions may be short lived,” said Wood Mackenzie analyst Kara Ozgen in a note to clients. “The other risk to LNG operations is power outages. Generally, LNG facilities have some back-up on-site generation, but they mainly receive power from the grid. If power is out for an extended amount of time, this could threaten the liquefaction processes.”

U.S. prices jumped by nearly 30 cents in Monday’s session. The October Nymex contract gained another three cents to finish at $5.260 Tuesday as the storm moved inland. U.S. natural gas prices broke through $5/MMBtu last week and have been trading at their highest point in nearly a decade.

Strong LNG exports and a cut in production following Hurricane Ida have also aided the bullish momentum, according to NatGasWeather. Any cut in exports could help curb the rise of U.S. prices, but it could also leave the global market short at a time when consumers across the globe are facing a squeeze.

Global LNG imports rose 7% year/year in both July and August, according to Morgan Stanley. However, export utilization remained weak at 82% of capacity versus the norm of 90% over that time. Planned and unplanned liquefaction outages and upstream issues have left the market short, the firm said in a note Monday.

Both the Dutch Title Transfer Facility (TTF) and National Balancing Point (NBP) benchmarks in Europe broke through $20 last week and rose above $21 on Monday. They finished higher yet again on Tuesday.

Continued uncertainty over the start-up of the Nord Stream 2 pipeline, a rise in Asian LNG prices, along with parity prices for coal, and low European storage inventories continue to prop up natural gas. The continent does not have the supplies it needs in storage headed into the winter heating season.

Power prices in parts of Europe have also surged on rising commodities, expected colder weather next month, low wind output and low hydropower reservoirs. The energy crunch is drawing closer attention from governments, with Spain and Greece moving to lower the cost of energy bills and other countries, such as France, considering it.

“A lack of any fundamental bearish factors in the near future is driving the move higher on sentiment,” Schneider Electric analyst Wolfgang Haider said of European natural gas prices. “Despite an unchanged outlook, we are approaching the deadline to hedge 4Q2021 and winter 2021 products, which could be contributing to the rise as stakeholders hedge up their exposure.”

Front month TTF and NBP contracts were trading above the Japan-Korea Marker (JKM), which could help attract some prompt LNG cargoes to Europe. However, while the spread has narrowed farther down the curve, JKM remained at a premium. Spot prices in North Asia reached their highest seasonal level on record last week, when they broke through the $20 mark for October.

The Morgan Stanley team also said volatility is likely to remain through year’s end. “With winter heating season around the corner, low inventories and limited potential for fuel switching for alternative fuels creates the risk of significant upside volatility from colder-than-normal weather or further supply disruptions.”

Crude prices also continued their rally Tuesday. Brent has moved well north of $70/bbl since Friday. Supply disruptions in the United States following Ida have continued to add to market concerns. Even at current levels, Brent-linked LNG prices under long-term contracts, which are typically priced at 11-15% of the global crude benchmark, cost roughly half of what spot LNG is fetching.

Elsewhere last week, the carbon-neutral LNG trade continued to gain momentum. Japan’s Inpex Corp. said it would supply another carbon-neutral shipment from Ichthys LNG in Australia to Toho Gas Co. Ltd. The cargo is expected to arrive at the Chita LNG terminal in Japan on Saturday (Sept. 18). Inpex delivered a similar shipment to Shizuoka Gas Co. Ltd. earlier this month.