Natural gas prices advanced for the first time in four sessions this week, boosted by a triple-digit decline in inventories and festering uncertainty about the Russia-Ukraine war’s impact on commodity markets. The April Nymex natural gas futures contract settled at $4.631/MMBtu, up 10.5 cents day/day. May gained 10.8 cents to $4.669. 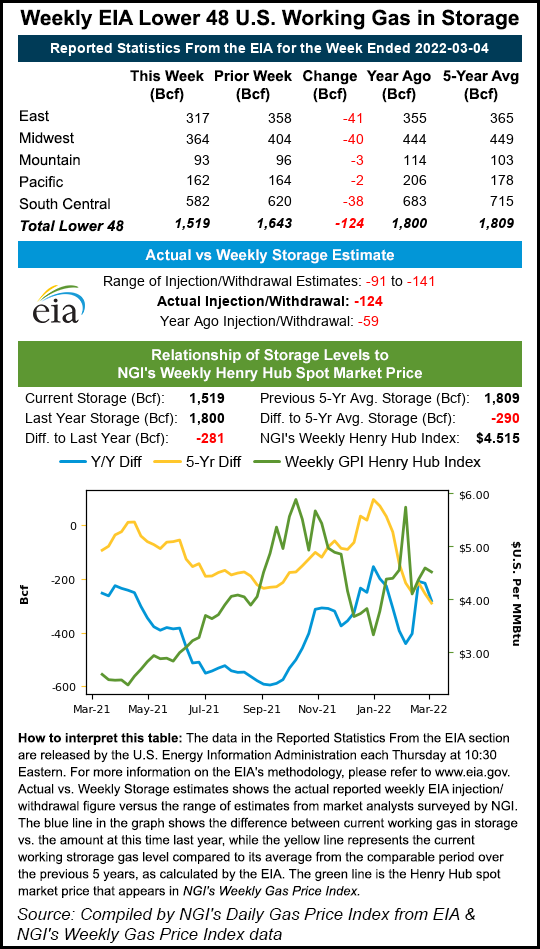 “It was colder than normal over the northern and central U.S.” during the latest EIA report period, NatGasWeather said. Demand for U.S. liquefied natural gas (LNG) also proved robust during the covered period and throughout the more than two-week war in Ukraine, with feed gas volumes hovering around 13 Bcf and near capacity.

The steady calls for U.S. LNG are likely to prove durable as long as the war rages, given that Europe relies heavily on Russia for natural gas but is trying to curb that dependence amid the conflict.

Prior to the EIA report, major surveys landed around a median estimate of 120 Bcf. The five-year average for the period was a pull of 89 Bcf, while the year-earlier period saw a 59 Bcf decrease.

The latest decrease lowered inventories to 1,519 Bcf, leaving stocks well below the year-earlier level of 1,800 Bcf and the five-year average of 1,809 Bcf.

The East and Midwest regions led with withdrawals of 41 Bcf and 40 Bcf, respectively, according to EIA. The South Central followed with a pull of 38 Bcf that included a 26 Bcf draw from nonsalt facilities and a decrease of 12 Bcf in salts. Mountain region stocks declined 3 Bcf, while Pacific inventories fell 2 Bcf.

However, the firm said that, while domestic demand this week is holding strong amid a late-winter cold front, weather likely had little effect on futures Thursday. Warmer weather patterns and the potential for lighter storage injections over the coming weeks had weighed down futures the three prior days.

“We still project end-of-season storage levels to come in above 1.4 tcf, on the assumption that the next few weeks will be looser,” given coming spring temperatures and likely eased heating demand.

Bespoke forecast a pull of 67 Bcf with the next EIA report, followed by a 45 Bcf decrease the week after. For the final week of March, the firm expects an injection of 4 Bcf.

Bespoke’s outlook was in line with expectations shared by participants on The Desk’s online energy platform Enelyst. “Definitely the last triple-digit draw of the season,” one analyst said of Thursday’s print.

NatGasWeather agreed. “Bigger picture in terms of U.S. supplies, the next two EIA storage reports are likely to print near normal,” followed by “a build instead of a draw for the report three weeks out to moderately improve deficits,” the firm said.

Overnight cold trends added 2-4 heating degree days (HDD) to the outlook Thursday. That was, a “minor” amount “compared to the more than 30 HDD shed since late last week on big warmer trends” between early next week and March 23, NatGasWeather said.

The pattern during this time frame “will result in the lightest national demand since last fall” as comfortable temperatures spread across much of the Lower 48, NatGasWeather said. “What makes the pattern emphatically bearish is recent weather data suggests bearish weather headwinds will continue into the last week of March.”

EBW Analytics Group’s Eli Rubin, senior analyst, noted that production dipped this week among the current bouts of chilly weather. Output has held around 93 Bcf this week, down from near 95 Bcf last week. As the weather warms in coming days, though, he said production is expected to recover.

“The current cold outbreak appears to have led to 1.5-2.0 Bcf/d of production freeze-offs…providing another layer of short-term support” for futures, Rubin said. However, production “should rebound while weather-driven demand sinks as much as 15 Bcf/d by mid-to-late next week.”

While fundamentals lean bearish, the war in Ukraine looms large as a wildcard. Russia bombarded the southern Ukrainian city of Mariupol on Thursday. This came a day after Russian planes bombed a maternity hospital in the city, amplifying the Kremlin’s indiscriminate assault, according to Associated Press reports.

The war has fueled intensifying uncertainty about Russia’s ability to export oil and natural gas. The United States banned Russian energy imports this week, and other countries could follow. Global oil and European gas prices have been volatile this week, and both reached multi-year highs at one point. Rystad Energy analysts said each could surge anew if other countries follow the U.S.’ lead, crippling Russia’s oil and gas complex and reducing global supplies. Domestic  gas prices could follow suit if that happens.

Already, energy prices in the United States are lofty by historical standards and are fueling an overall surge in inflation. The U.S. Labor Department said Thursday inflation reached a new 40-year high of 7.9% in February, led by surging oil costs.

“A big worry is the mindset of higher inflation, which makes it easier for firms to raise prices whether justified by higher costs or not,” said Raymond James & Associates Inc.’s Scott Brown, chief economist. “Price increases have broadened across” the U.S. economy and show no signs of easing.

Next-day cash prices varied by region, with prices up throughout the nation’s midsection amid bouts of freezing air but down in the West, where comfortable conditions reigned.

Out West, however, prices dropped.

IBM’s The Weather Company noted that demand was strong throughout the middle of the country as a cold front pushed through. Another blast of chilly air was expected Friday that could push East, delivering cold to a wider expanse of the Lower 48.

Temperatures were expected to warm quickly next week, bringing highs in the 60s to parts of the northern United States and highs in the 70s to 80s in the South, likely crimping heating demand notably.

“It may be a little premature to say winter is over, but there is good medium-range model guidance” to support “a transition to warmer spring conditions as next week progresses into the back half of the month,” The Weather Company’s Michael Shuman, senior meteorologist, said.

Meanwhile, the U.S. Climate Prediction Center said Thursday there is a 53% chance that La Nina conditions could persist through the summer and a 45% chance of those conditions carrying into next fall.

This raises the likelihood of Atlantic hurricanes, which could disrupt natural gas operations on the Gulf Coast late in the summer and early fall. La Nina conditions tend to allow more tropical systems to strengthen into hurricanes, the forecaster said.