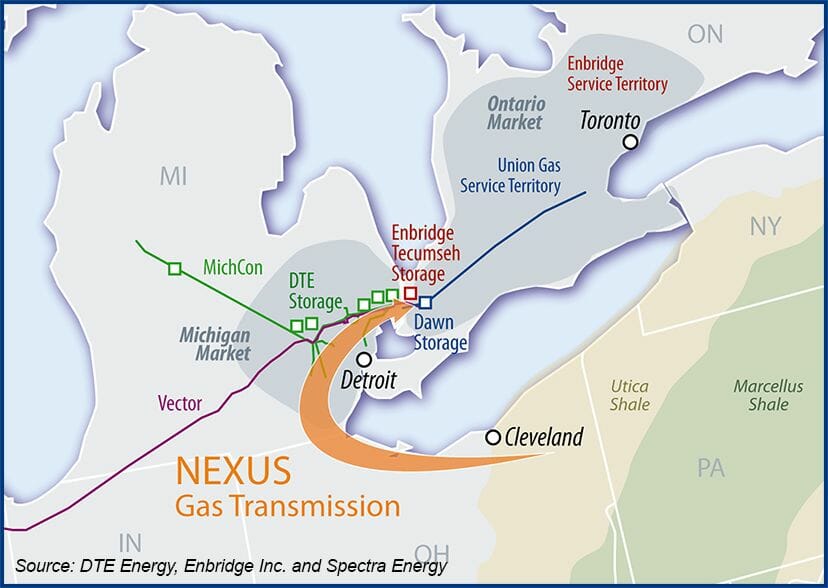 The NGT project would originate in northeastern Ohio, include about 250 miles of large-diameter pipe and be capable of transporting 1Bcf/d. The pipeline would follow existing utility corridors to an interconnect in Michigan and utilize the existing Vector Pipeline system to reach the Ontario market.

The project could cost $1.2-1.5 billion, the companies said.

“The project will provide critical access to emerging supplies from the Utica Shale gas producing area and provide energy consumers in the region with affordable, cleaner-burning and domestically abundant natural gas to help meet the growing environmental need for cleaner power generation and home heating,” the companies said in a fact sheet announcing the project.

NGT also could carry some Marcellus gas, too, Spectra’s Brian McKerlie, vice president for business development, told NGI’s Shale Daily. Calling it a Utica project gives the effort a focal point. It also would be developed on a timeline anticipated to be in step with the Utica’s coming into its own. “…[L]argely the focus is to capture the new Utica development as it begins to materialize over the next few years,” he said.

“The Utica is in the very early stages of development. We think it holds great promise as the Marcellus did for how it will develop and come on over the coming years. Just being able to access a new market like Michigan or eastern Canada, I think, is pretty exciting for those producers.”

Over the next five years Utica production is expected to grow to about 2 Bcf/d, Bentek Energy LLC analyst Kyle Martinez, who focuses on the Northeast region, told NGI’s Shale Daily. Martinez said he doesn’t expect NGT to take a full 1 Bcf/d of the Utica’s output. “That seems kind of large,” he said. But then there is all that gas coming from the Marcellus, too.

Upon completion of the project, Spectra Energy would become a 20% owner of Vector, which is a joint venture of DTE Energy and Enbridge. Currently, Enbridge has a 60% stake in Vector and DTE Energy a 40% stake. As for NGT, each of the three partners is expected to hold one-third.

The new pipeline would serve local distribution companies, power generators and industrial users in Ohio, Michigan and Ontario. It would include interconnects with Michigan Consolidated Gas Co., Consumers Energy and, through Vector, the Enbridge Tecumseh Gas Storage facility and Union Gas’ Dawn Hub, both of which are in Ontario.

“I think that one of the biggest market demand points here is through the local distribution companies in Ontario and Quebec and Michigan, so eastern Canada and Michigan. They’re largely commercial and residential customers. So I think a good portion of the gas that makes its way into those regional markets will serve that,” McKerlie said.

Gas-fired power generation is a growing market, too, he said, particularly in Ontario where a commitment has been made to rely more on natural gas. “I think that you’ll see a fair amount of the market being there,” McKerlie said. “I think as we move across the states of Ohio and Michigan we believe there will be opportunities to serve power generation along that corridor as well.”

Abundant gas storage capacity, at the Dawn Hub and elsewhere, also makes the project attractive, McKerlie said. “When we get to the Dawn Hub there’s significant storage there, owned and managed by either Union Gas or Enbridge through their Tecumseh [Gas Storage Ltd.] field,” he said. “And there’s storage in Michigan.

“One of the neat things about this project is this is a great supply-meets-demand story for the region, and producers are looking to move their gas on a 365-day portfolio…[L]anding in that region with all that storage will really allow the two to work very well together.”

McKerlie said the partners “expect that there will be some expansion to” Vector in order to accommodate volumes delivered by NGT.

Martinez said currently most of the gas coming onto Vector is delivered by the Alliance Pipeline system. During the last 30-day average period Vector has received about 650 MMcf/d from Alliance, according to Bentek. “They’re [Vector] pretty much full right now,” Martinez said. “They’re delivering about 800 MMcf/d into Dawn.”

As for pushback from Canadian producers not wanting to see U.S. gas enter the country, McKerlie said that shouldn’t be a problem.

“…[C]ertainly there’s growth that’s occurring there [in eastern Canada] that’s seeking out new supply, and I think the other dynamic that’s important to realize here is that the existing Western Canadian supplies, the traditional production, is declining. So I think there are two dynamics here for the market that make a lot of sense and that’s that they have existing markets that need to be served and there’s growth, largely from the power market…And they need a new source of supply into Ontario and Quebec and this is a way of doing it.”

The partners said they have received expressions of interest for a “significant level” of firm capacity to anchor the project. An open season is planned for the fourth quarter. The project has a targeted in-service date as early as November 2015, depending upon final market demand and commitments.

Gas from the Marcellus Shale, which lies above the Utica, has been pushing Canadian gas out of the Northeast and is seen making inroads in Canadian markets, an analysis released earlier this year by LCI Energy Insight and Energy Ventures Analysis found (see Shale Daily, Feb. 21).

According to the Ohio Department of Natural Resources’ Division of Oil and Gas Resources Management, as of Aug. 5 there had been 335 permits issued to drill horizontal wells in the Utica. Of those, only 118 have been drilled. Carroll County led the field with 124 permits issued, followed by Columbiana (48), Harrison (28) and Jefferson (26) counties. Other counties with significant permits issued were Monroe (17), Guernsey (16), Stark (13), Mahoning and Noble (12 each), and Portage (10) (see Shale Daily, Aug. 16). 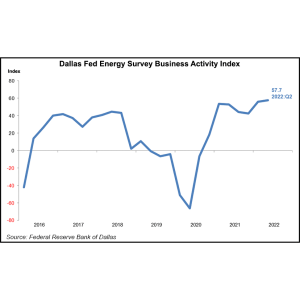