Triangle Petroleum Corp. reported reduced completion costs and is considering a shift to infill what is rapidly being considered its core acreage in the Bakken Shale, as business from its oilfield services subsidiary and a midstream joint venture (JV) in the play also pick up steam. 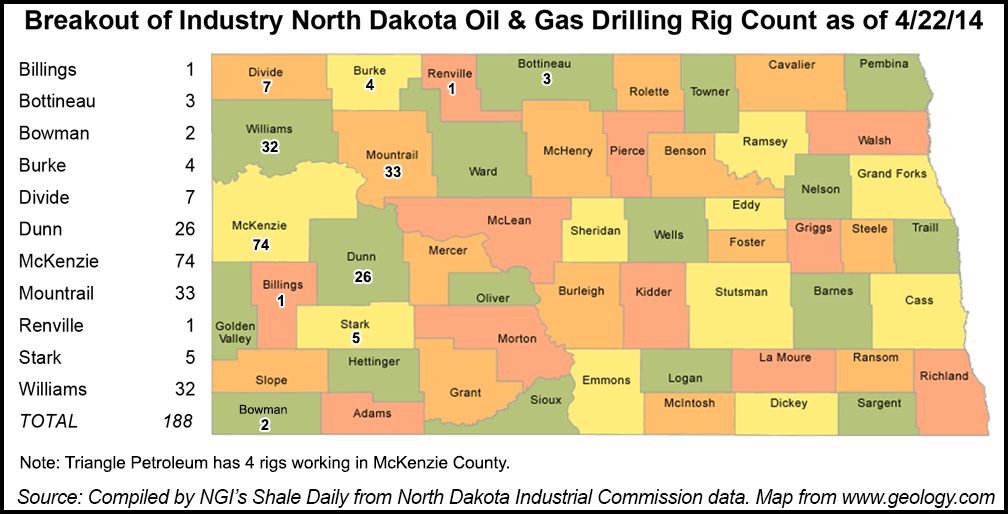 The company added that it would continue what has so far been a successful downspacing effort, with multiple drilling space units (DSU) containing middle Bakken wells spaced approximately 600 feet apart. Triangle said initial well results from currently producing infill wells showed about a 15% increase in production.

“We’re trying to isolate different components of completion designs,” CEO Jonathan Samuels told analysts during a conference call to discuss the 4Q2014 results last Thursday. “If you go from how we did a well six months ago to all the things we’re talking about, you don’t necessarily know which element or variable you changed and what it impacted. We’re trying to do that, and for some of these things, it is becoming real obvious.”

Case in point, Samuels said the transition to a new completion design using cemented liners and a hybrid design for hydraulic fracturing (fracking) has shown a possible 30-40% improvement in 30-day cumulative production rates.

“We haven’t formally shifted at all [toward infill completions], and it’s still early in the production history,” Samuels said. “We just don’t have a ton of wells and they don’t have a ton of data behind them. We want to be deliberate; we want to get better, and we are excited about what we see. But to do this we’ve got to be careful about taking individual data points and swiping it with a broad brush.”

“We have a slickwater tail, we have changed our chemical mixture [and] other things like that, and we are seeing a 15% improvement. It’s one of things you want to see when you go infill. You [want to be able to say] all the infill wells are going to be as good as the previous wells.”

Triangle spent $313 million on operated and non-operated drilling and completion costs in fiscal 2014. The company said it completed 31 gross (23.5 net) operated wells with a three-rig operated program in fiscal 2014, and completed 81 gross (4.6 net) non-operated wells. According to CFO Justin Bliffen, the company plans to complete 42 to 46 gross wells, with an average working interest of 65-70%, during the 2015 fiscal year. The company is currently running a four-rig drilling program.

“We’re drilling wells so much faster than we were even three or four months ago when we set the budget,” Samuels said. “[With regard to] the gross wells for the [2015] year, there is going to be no problem hitting that, and the net as well. It’s really just going to be a question of do we need to keep four rigs for the whole year to do it because a single rig is just a lot more productive for us today than it was.”

RockPile had a backlog of about 15 wells, including eight for third-party operators, awaiting completion at the end of fiscal 2014.

“Winter [was] a big part of that,” Samuels said. “But also as people shift to pad drilling — and drilling four, five, six wells at a clip — that means that a rig may have showed up on location last September or October for one of our customers, or someone else in the basin, and still hasn’t left that pad yet. So you’re not completing those wells.

“The rig count in the [Williston] basin is flattish to slightly up, but people are drilling wells a lot faster. It’s sort of an overall trend that we see.”

The company said its total estimated net proved reserves had increased 175% y/y between fiscal 2013 and 2014, to 40.3 million boe. Triangle’s exploration and production (E&P) unit generated $160.5 million in revenue during fiscal 2014, with an adjusted earnings before interest taxes depreciation and amortization (EBITDA) of $111.7 million, a 407% y/y increase.

Triangle holds about 94,000 net acres in the Williston Basin, targeting the Bakken Shale and the Three Forks Formation. The company holds about 45,000 net acres in North Dakota, in the Rough Rider area of McKenzie and Williams counties. Another 49,000 net acres held by Triangle lies in Montana’s Roosevelt and Sheridan counties, a mostly contiguous position adjacent to the Elm Coulee field.