Seismic activity in Kansas has been on the rise for a while and has been blamed on drilling waste injection wells, so state regulators recently acted to limit injection volumes where tremors have been prevalent. And in neighboring Oklahoma, injection well operators were recently required to limit the depth of their disposals. 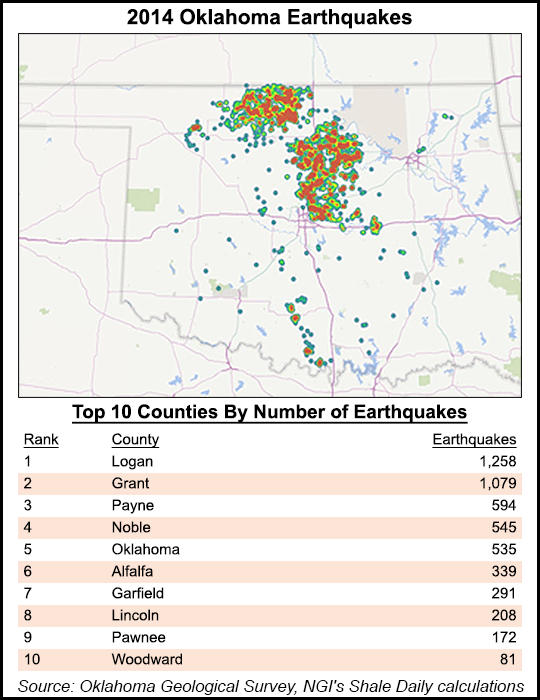 The state recently formed a task force to study induced seismicity that includes the participation of the Kansas Geological Survey (KGS), KCC and Kansas Department of Health and Environment. Besides an increase in seismicity in Harper and Sumner counties, researchers also found an increase in injection well activity.

The task force came up with what it calls a seismic action score to enumerate the significance of quakes. From the first of this year until March 16, there were 113 quakes in the state that had a score of 17 or higher. A score of 17 or higher triggers notification to the KCC by the KGS and regulatory action is considered.

“Commission staff, in consultation with the KGS, recommended, and the commission finds, there are areas in Harper and Sumner counties which are more seismically active and potentially prone to induced seismic events. These areas require immediate action with regard to the operation of Class II injection wells.”

Meanwhile in Oklahoma, the Oil and Gas Conservation Division (OGCD) of the state’s Corporation Commission issued new rules for Arbuckle Formation injection wells. Disposal well operators in “areas of interest” that inject into the Arbuckle Formation (the state’s deepest formation) have until April 18 to prove to the OGCD that the well is not disposing below the Arbuckle. “There is broad agreement among seismologists that disposal below the Arbuckle poses a potential risk of causing earthquakes as it puts the well in communication with the solid ‘basement’ rock,'” OGCD said.

Oklahoma’s order applies to about 347 of approximately 900 Arbuckle disposal wells in the state, according to OGCD.

Last fall, Oklahoma regulators shut in a disposal well that was thought to have been drilled to deep following a spate of seismic activity in the area (see Shale Daily, Oct. 31, 2014).