An analysis of weather forecasts, the economy, consumer demand, and production and storage of natural gas points to neutral price pressure this summer, according to the Natural Gas Supply Association (NGSA). 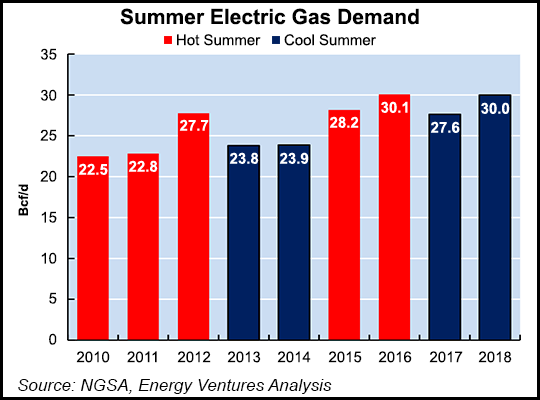 “Our expectation for flat price pressure is based on a forecast for tremendous growth in demand that is matched by even more impressive growth in production,” NGSA said in its 2018 Summer Outlook for Natural Gas, which was released Thursday.

NGSA expects record demand this summer to be “fueled by record growth in electric sector demand for natural gas due to massive natural gas-fired generation additions since last summer, along with temporary coal-to-gas switching” that together will add up to a 10% increase in demand from the sector compared with summer 2017. Demand from the residential and commercial sectors is expected to increase by 7% and industrial demand is expected to increase slightly as well.

At the same time, liquefied natural gas exports will increase 1.6 Bcf/d compared with last summer, and exports to Mexico will increase 0.5 Bcf/d, according to NGSA forecasts.

“When all sectors are combined, overall demand is projected to be more than 6 Bcf/d (9%) greater than the summer of 2017 and thus to place upward pressure on natural gas prices compared to last summer,” NGSA said.

But that upward pressure will be met by production that “is projected to smash through previous robust levels,” placing nearly equal downward pressure on prices.

In an assessment of energy markets released earlier this month, FERC said demand for gas from power generators may approach record highs this summer.

The Energy Information Administration (EIA) is forecasting natural gas power burn will average 35.16 Bcf/d in June, July and August, just 0.3 Bcf/d less than the record high set in summer 2016 and 3 Bcf/d higher than last year, according to the Federal Energy Regulatory Commission analysis.

Using data from EIA and Energy Ventures Analysis, NGSA analyzes factors that place upward or downward pressure on natural gas prices, but does not forecast actual prices. In addition to the influence of demand and production, NGSA said expected higher gas injections into storage would place upward pressure on prices this summer, economic factors including steady growth in gross domestic product would bring neutral pressure, and weather conditions including temperatures expected to be 5% cooler than summer 2017 would produce downward pressure.

Wild card factors that could play a hand in summer natural gas prices include “an unpredicted and very active hurricane/storm season…which would mainly affect demand, since most onshore producing gas fields are not vulnerable to hurricanes,” NGSA said.

Last week, forecasters at the National Oceanic and Atmospheric Administration said the 2018 Atlantic hurricane season, which officially begins Friday, is likely to be a near- or above-normal one. Scientists at Colorado State University have said they expect slightly-above-average tropical storm activity this year, and AccuWeather’s Global Weather Center predicted 12-15 named storms forming in the Atlantic Basin this year, with six to eight becoming hurricanes, including three to five major hurricanes.

The 2018 Atlantic hurricane season’s first named storm, Subtropical Storm Alberto, made landfall along the Florida Panhandle Monday, bringing strong winds and heavy rainfall, before being downgraded to a subtropical depression. The storm’s landfall appeared to be demand destructive for areas in the Southeast along its path.