Natural gas futures action was quiet on Friday, with traders content leaving their positions intact amid little fresh news to drive prices one way or the other. The May Nymex gas futures contract closed the week at $2.526, up only four-tenths of a cent from Thursday’s close. June slipped two-tenths of a cent to $2.605. 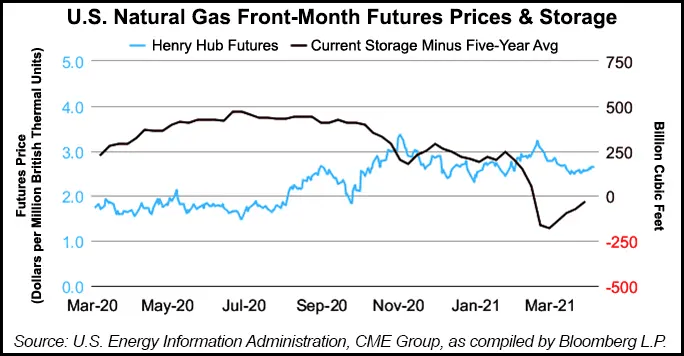 Spot gas prices were mostly higher outside of the Northeast, but sharp losses there sent the NGI Spot Gas National Avg. down 1.0 cent to $2.265.

Friday marked the second day in a row in which the prompt Nymex futures contract barely budged. “The May contract is trapped,” said EBW Analytics Group LLC.

Though a significantly warmer shift in weather forecasts after the Easter weekend drove a substantial collapse in prices early in the week, any subsequent changes in the weather data have failed to inspire similar price moves.

At this time of year, any small changes in the model runs “are mostly just trivial,” according to Bespoke Weather Services. The general theme remains a higher demand period on the way in the coming days and continuing into the following week. This is because of colder air seen pushing into the central and eastern United States, elevating heating degrees in the Midwest and East. However, the chillier air should also reduce early-season cooling degree days farther south, where the cooling results in “very comfortable” conditions.

“We feel the cooler weather will fade as we move toward the end of the month, with odds favoring the resumption of the warmer overall base state toward early May,” Bespoke said.

Traders on Friday also continued to digest the latest storage data. The Energy Information Administration (EIA) reported Thursday that inventories for the week ending April 2 rose by 20 Bcf. This compared with major surveys that coalesced around a build in the low 20s Bcf. NGI projected a 23 Bcf injection.

Total working gas in storage as of April 2 stood at 1,784 Bcf, which is 235 Bcf below-year ago levels and 24 Bcf below the five-year average, according to EIA.

The Schork Group pointed out that salt facilities in the South Central region reported a sixth straight injection, resulting in a total 85 Bcf being added to stocks. The five-year average for this part of the season is 12 Bcf and the seasonally adjusted norm is around 20 Bcf, according to the firm.

“Injections are more than double last year’s pace of 36 Bcf,” analysts added. “Since February’s winter storms in the Mid-Continent, the year/year deficit has been whittled down from 94 Bcf (-39%) to 30 Bcf (-11%).”

The Schork Group also noted the EIA’s revised outlook for the storage inventories at the end of the traditional injection season. In the latest Short-Term Energy Outlook, EIA said stocks at the end of October could reach more than 3.7 Tcf, which is equal to the five-year average.

Based on Thursday’s storage report, “we calculate the probability of coming in at/above the EIA’s revised forecast at 58%,” The Schork Group said. “Our current 50/50 line is 3.918 Tcf.”

“If late 2021 and summer 2022 continue to show strength, it may help support near-term contracts and mitigate potential short-term weakness in the weeks ahead.”

“Given the fact that we are coming off the seventh warmest winter on record realizing at $2.83, next winter’s premium is of note,” Houston-based Mobius said. “Considering end-of-October inventory projections hover roughly around the 3.6 Tcf mark, according to most market participants, and the upcoming winter holds only a modest premium to a multiple standard deviation warm weather event, next winter should bring upside/downside risk for both producers/consumers.”

Texas pricing locations mostly churned out small gains as well, and farther West, prices were mixed but shifted less than a nickel day/day at the majority of market hubs.

SoCal Citygate was a glaring exception, with spot gas prices rocketing up 25.0 cents to 3.185.