Transcontinental Gas Pipeline Co. LLC (Transco) has asked FERC to grant final approval for its proposed Dalton Expansion Project in Georgia by the end of the month, in order for the company to begin construction and meet the in-service date it promised customers. 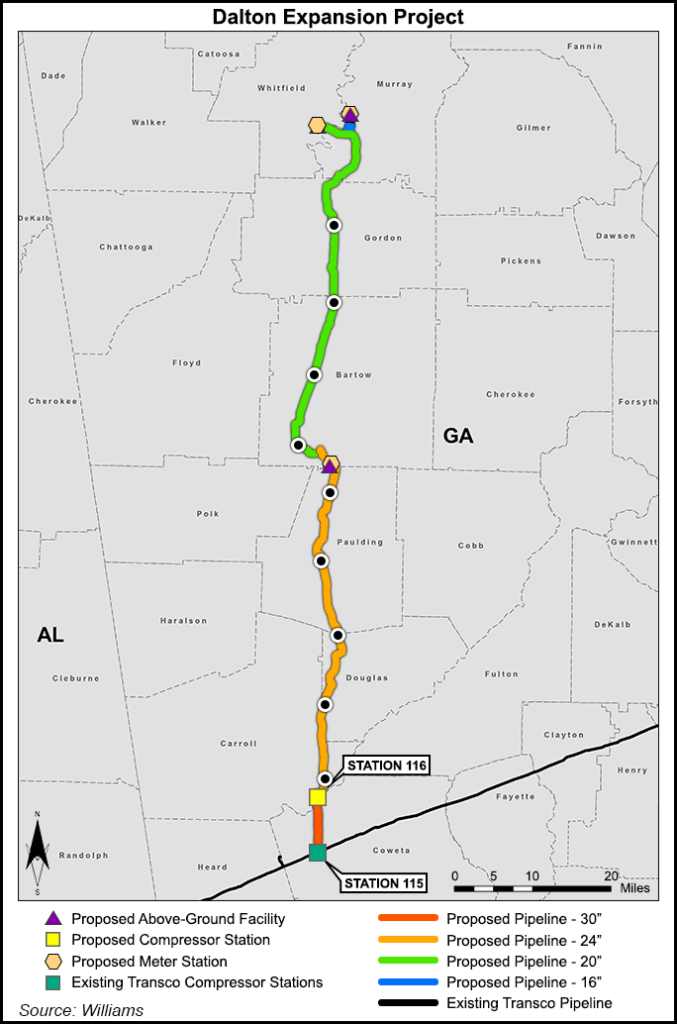 In a letter, Charlotte Huston, Transco director for rates and regulatory issues, reaffirmed the need for prompt approval of the project [CP15-117] by the Federal Energy Regulatory Commission, “and respectfully requests that the commission grant the authorizations requested” by May 31.

“In particular, construction crews will need approximately two months to build a road to the new Compressor Station 116 site, as well as perform other detailed site preparations prior to moving in equipment and commencing construction of the station,” Huston wrote in the May 20 letter. “This creates a tight construction schedule, and Transco must begin no later than July 1, 2016, in order not to jeopardize the May 1, 2017, in-service date.”

The Dalton Expansion Project calls for construction of 112 miles of new pipeline, ranging from 16 to 30 inches in diameter, from the existing Transco pipeline at Station 115 in Coweta County, GA, to new delivery points in Georgia’s Bartow and Murray counties (see Shale Daily, March 20, 2015). The project also includes a new compressor facility in Carroll County, GA, as well as three new metering facilities and other related pipe and valve modifications to existing facilities. According to FERC, Transco also plans to modify existing facilities along its mainline in Virginia and North Carolina to accommodate bi-directional flow.

The pipeline lateral is designed to connect the Transco mainline to an existing power plant in northern Georgia operated by Oglethorpe Power Co., and to provide natural gas to a local distribution company operated by Atlanta Gas Light Co.

Although FERC issued an environmental assessment (EA) for the project on March 31, the U.S. Fish and Wildlife Service disagreed with the move and urged the agency to reconsider (see Shale Daily, April 7). According to FERC records, the U.S. Environmental Protection Agency (EPA) lodged separate concerns over the project earlier this month.

“Given the high ecological value and sensitivity of the Etowah River and the associated ecosystems that will be impacted during the short-term construction activities, and in some cases, over the long-term during the life of the proposed project, the EPA recommends that FERC supplement this EA,” EPA said in a May 2 letter. “The supplement should include additional analysis to more fully address the magnitude and intensity of the impacts associated with the project as well as discussing the recent post-EA proposed changes.”