FERC should weigh Transcontinental Gas Pipeline Co. LLC’s (Transco) Virginia Southside Expansion Project II and its Atlantic Sunrise Project simultaneously as they both involve work at the same existing compressor station in Virginia, environmentalists told the Commission in a motion to intervene out of time. 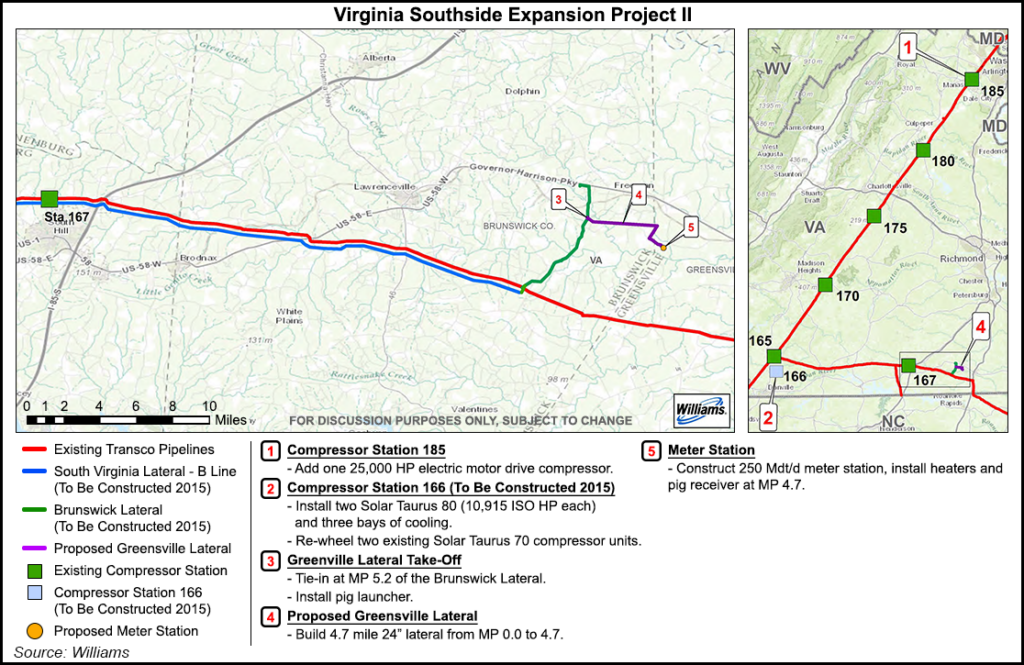 Both projects involve work at Compressor Station 185 in Prince William County, VA. Appalachian Mountain Advocates along with the Sierra Club told the Federal Energy Regulatory Commission (FERC) that makes them “connected,” requiring that they be considered in the same environmental impact statement (EIS).

Virginia Southside II [CP15-118; not to be confused with the original Virginia Southside (see Daily GPI, Sept. 1, 2015)] would serve the need of Dominion Virginia Power to fuel a new 1,580 MW power plant it plans to build in Greensville County, VA. The project would include an additional unit at a compressor station in Pittsylvania County, VA, and the addition of an electric motor at the Prince William County station. One metering and regulator station would be added, as well as four miles of 24-inch diameter pipeline along an existing utility corridor in Virginia.

Modifications at Compressor Station 185 in Prince William County would be made to enable bi-directional flow as part of Atlantic Sunrise. That’s the link, according to the would-be intervenors.

“Here, it is clear that Virginia Southside [II] ‘cannot or will not proceed’ unless action on Atlantic Sunrise is taken ‘previously or simultaneously,’ Appalachian and Sierra said. “Without reconfiguring CS 185 as part of Atlantic Sunrise to allow gas to flow from north to south along Transco’s mainline, it is doubtful that Transco would be proposing Virginia Southside to take that gas to VEPCO’s [Virginia Electric and Power Co.] proposed power plant.”

Appalachian and Sierra quoted some Williams Transco press release boilerplate similar to what the company often includes in project announcements. To wit, “The Virginia Southside Expansion is part of $4.8 billion in Transco growth that Williams has previously announced it plans to bring into service between 2015 and 2017. Williams is executing on 15 projects in 10 states…”

So the two projects “…are part of Transco’s larger project…” the would-be intervenors said. “Since FERC is already preparing an EIS for Atlantic Sunrise, it should consolidate its review of Virginia Southside into that analysis as well as any other expansion plans so that FERC and the public are able to fully assess the scope of Transco’s proposed expansion plans and their environmental impacts.”

The motion to intervene was filed under the Virginia Southside II docket.