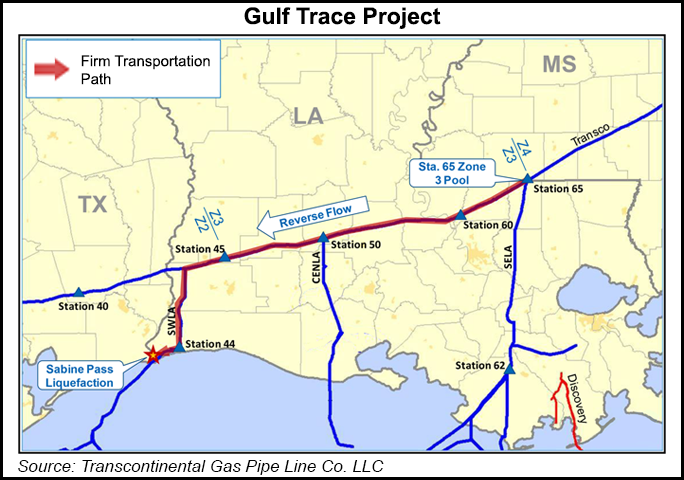 The Williams pipeline is offering up to 1.2 Bcf/d of firm capacity from the pipeline’s Station 65 Zone 3 Pool in St. Helena Parish, LA, to a new interconnect at the Sabine Pass Liquefaction Terminal in the pipeline’s Zone 2 in Cameron Parish, LA.

The binding open season is scheduled to end May 8. Service would be performed under Transco’s Rate Schedule FT. Transco said in a customer notice it anticipates that Gulf Trace will qualify for rolled in rates. The pipeline expects that the recourse reservation rate will be the Rate Schedule FT non-incremental daily reservation rate for firm service from Zone 3 to Zone 2 (currently $0.13605/Dth, excluding the electric power unit rate). Transco said it will consider requests for firm service at rates that are lower than this rate. The term for service is 20 years.

The U.S. Department of Energy recently granted Cheniere Energy’s Sabine Pass Liquefaction LLC (SPL) authorization to export 314 Bcf of liquefied natural gas per year from the Sabine Pass terminal to countries with which the United States has a free trade agreement (see Daily GPI, Feb. 3). The authorization was to cover any “surplus” LNG made available by the project’s Trains 5 and 6 that is not already contracted for export under sale purchase agreements with Total Gas & Power North America Inc. or Centrica plc. The term of the authorization is 20 years (see Daily GPI,Sept. 25, 2013; March 7, 2013).