Transcontinental Gas Pipe Line Co. LLC (Transco) on Friday received authorization from FERC to place into service the second phase of facilities for the Garden State Expansion project, which would provide 180,000 Dth/d of incremental firm capacity in Burlington and Mercer counties, NJ. 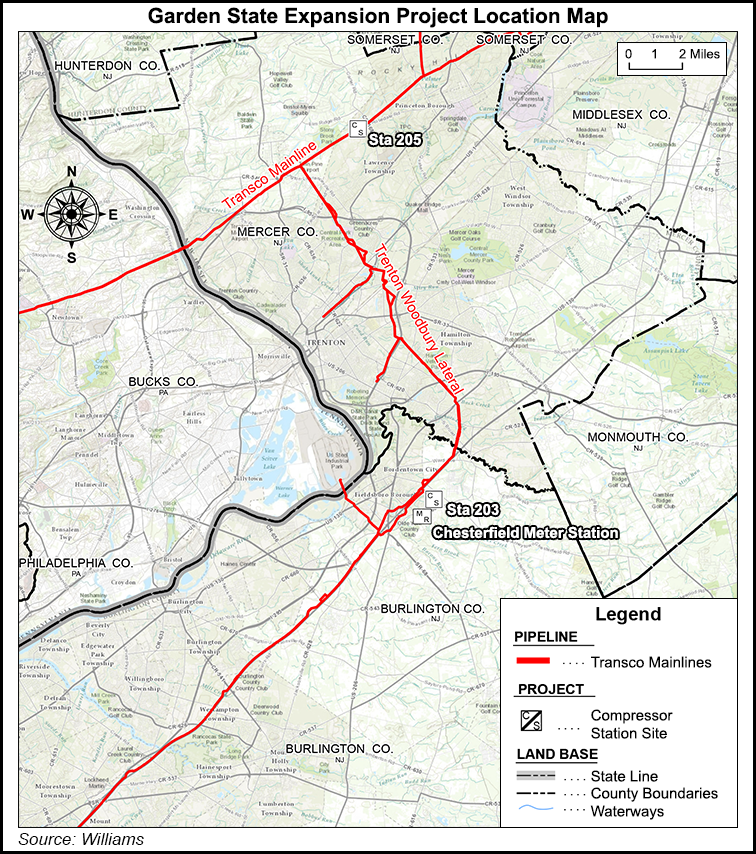 The approval was based on a review of Transco’s recent construction status reports and a Feb. 6 field inspection, according to the Federal Energy Regulatory Commission [CP15-89].

Williams Partners LP first announced the project in July 2014, and FERC issued a certificate for the Garden State Expansion in April 2016. The $116 million project was to be constructed in two phases from Transco’s Station 201 Zone 6 Pool in Mercer County to a new delivery point with New Jersey Natural Gas Co. on Transco’s Trenton Woodbury Lateral in Burlington County. Phase 1, which was completed in September, was planned to provide 20,000 Dth/d of capacity.

The Garden State Expansion was opposed by two New Jersey townships that sought to overturn FERC’s approval of the project.

Williams has seven fully contracted projects that are scheduled to go into service in 2019 and beyond, including Transco’s Northeast Supply Enhancement project. The nearly $1 billion project would allow Transco to increase gas deliveries to National Grid, the largest gas distributor in the Northeast. The expansion is designed to create 400,000 Dth/d of incremental firm capacity to Northeast markets, primarily to feed growing demand for gas in New York City, which plans to phase out the use of No. 4 fuel oil by 2030 to help curb emissions.