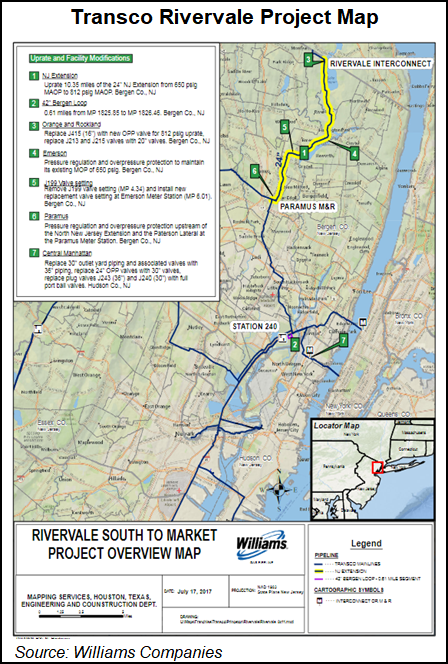 Various compression and metering and regulating stations would also see upgrades, including:

Rivervale is scheduled to enter service in time for the 2019/2020 heating season.

“New York City and northern New Jersey continue to be important growing markets for our vibrant commercial, industrial and wholesale businesses,” Steve Haugenes, vice president of Direct Energy Business’ Natural Gas Operations Group, said. “Firming up volumes that have been flowing on a secondary basis will enable us to better meet the reliability standards that our customers demand.”

J.P. Ghio, vice president of UGI Energy Services’ Supply and Customer Operations, said the project “is a natural fit for UGI Energy Services as we continue to grow in the Mid-Atlantic by delivering clean, low-cost natural gas to our customers in New Jersey and New York. New York City has made tremendous strides in air quality due primarily to the conversion from fuel oil to natural gas, and 74% of homes in New Jersey rely on natural gas to heat their homes. The Rivervale South to Market project will serve to further those efforts.”

The Transco mainline stretches 1,800 miles from South Texas to New York. Rivervale is one of $5 billion in expansion projects recently completed or in the works for Transco’s 10,200-mile pipeline network.

The brownfield Rivervale may have a slightly easier regulatory hill to climb compared to its greenfield counterparts. Especially in the Northeast, greenfield pipelines have faced obstacles to moving forward with construction, even after securing FERC’s blessing. This includes the Williams-backed Constitution Pipeline, which stalled after New York state regulators denied a water quality permit last year.

New York state has been at the center of a number of regulatory decisions hostile to natural gas infrastructure, a trend explored in-depth in a new series from NGI.

Meanwhile, Transco’s Atlantic Sunrise expansion only recently received key permits for its greenfield segment from the Pennsylvania Department of Environmental Protection and from the U.S. Army Corps of Engineers. Atlantic Sunrise received its FERC certificate in February and has already added 400,000 Dth/d of incremental service on the project through brownfield expansion.

Last week, FERC denied a stay request filed by a coalition of project opponents seeking to halt construction on Atlantic Sunrise. Responding to assertions by opposition groups that it was unfair to allow Atlantic Sunrise to move forward with construction during the Commission’s six-month quorumless stretch earlier this year, the recently reinstated FERC noted that “during the period it lacked a quorum, judicial forums were available for those who believed immediate relief was necessary.”

As for the rehearing requests filed against Atlantic Sunrise, FERC said it won’t prejudge and that Transco “bears the risk we will revise or reverse our initial decision or that our orders will be overturned on appeal.”

Atlantic Sunrise, designed to add a much-needed incremental 1.7 million Dth/d of capacity out of the northeastern Marcellus Shale, is scheduled for completion by mid-2018.