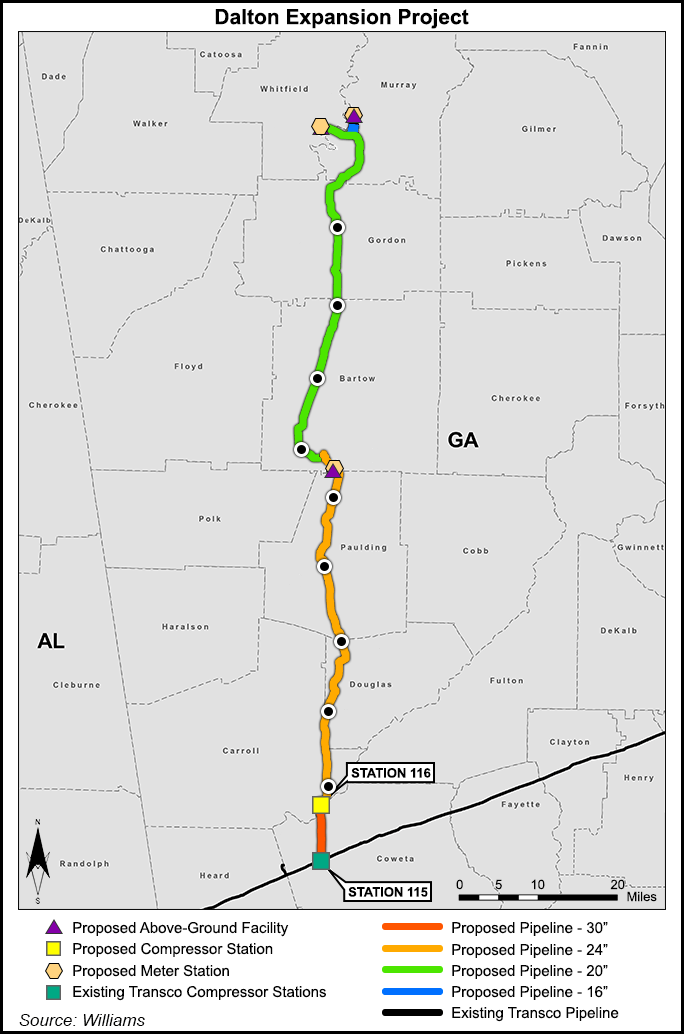 In a letter dated Wednesday to the Federal Energy Regulatory Commission [CP15-117], Transco said one of the project’s shippers, Oglethorpe Power Corp., requested interim service effective April 1 for its 208,000 Dth/d share of the project’s capacity, which totals 448,000 Dth/d. To accommodate the request, Transco asked FERC to issue written authorization by March 17.

“With regard to the remaining 240,000 Dth/d of available partial path project capacity, Transco proposes to post the capacity on its unsubscribed capacity report upon receipt of the in-service authorization requested herein, as well as conduct an open season to solicit bids for interim service using the available capacity,” wrote Transco Regulatory Analyst Ingrid Germany.

“The interim, partial path firm transportation service under the project will be provided to Oglethorpe and any other qualifying shippers until such time as the full path project facilities are constructed and placed into service.”

The Dalton Expansion Projectcalls for construction of 112 miles of new pipeline along the Transco system, ranging from 16 to 30 inches in diameter, from the existing Transco pipeline at Station 115 in Coweta County, GA, to new delivery points in Georgia’s Bartow and Murray counties. The project also includes a new compressor facility in Carroll County, GA, as well as three new metering facilities and other related pipe and valve modifications to existing facilities. Transco also plans to modify existing facilities along its mainline in Virginia and North Carolina to accommodate bi-directional flow.

The pipeline lateral is designed to connect the Transco mainline to an existing power plant in northern Georgia operated by Oglethorpe, and to provide natural gas to a local distribution company operated by Atlanta Gas Light Co. An open season was completed in April 2014.

Earlier this month, attorneys representing landowners opposed to the pipeline asked FERC to block the project on the grounds that Transco allegedly violated a presidential memorandum issued last month by the Trump administration requiring the use of domestically produced iron and steel in pipelines. Transco’s parent, Williams, as well as the Interstate Natural Gas Association of America called the claim baseless.

Germany said the project remains on schedule to be placed into service on May 1.