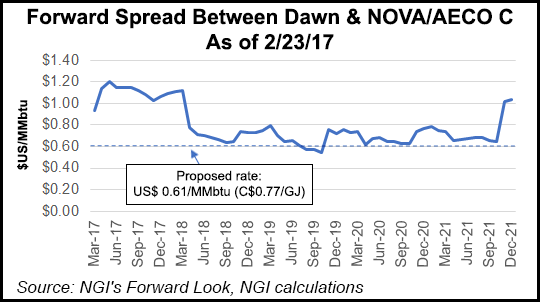 The bargain is a simplified version of an overture that TransCanada scrapped last November after shipper demand during a one-month fall open season fell “well short” of the pipeline’s contract and traffic targets.

The new scheme differs by offering only one bargain toll as opposed to a range in the 2016 plan, which included reductions of the 46% savings for low-volume transportation service bookings.

TransCanada is maintaining its original requirements for granting the full discount: 10-year transportation service contracts and a minimum total sale volume of 1.5 petajoules (1.4 Bcf) per day.

TransCanada Vice President Stephen Clark said, “While we have held extensive discussions with customers and have received a positive response, it is important that these threshold conditions are met.”

Clark repeated the 2016 description of the cut-rate delivery capacity sale as an “opportunity for Western Canadian Sedimentary Basin producers to compete with emerging supplies of natural gas from the Marcellus and Utica basins” in the eastern United States.

Since the onset of the “shale gale” of abundant U.S. gas production with horizontal drilling and hydraulic fracturing, western Canadian deliveries across TransCanada’s Mainline have deteriorated to less than half of its capacity.

Records of the National Energy Board show the 2015 average throughput in the Mainline’s western leg was 3 Bcf/d or 43% of its 6.9 Bcf/d capacity. In the eastern leg, traffic last year averaged 2 Bcf/d or 38% of 5.2 Bcf/d capacity.