TransCanada Corp. has pushed back the targeted completion dates of its already delayed Tuxpan-Tula and Tula-Villa de Reyes natural gas pipeline projects because of an impasse with local authorities along the routes. 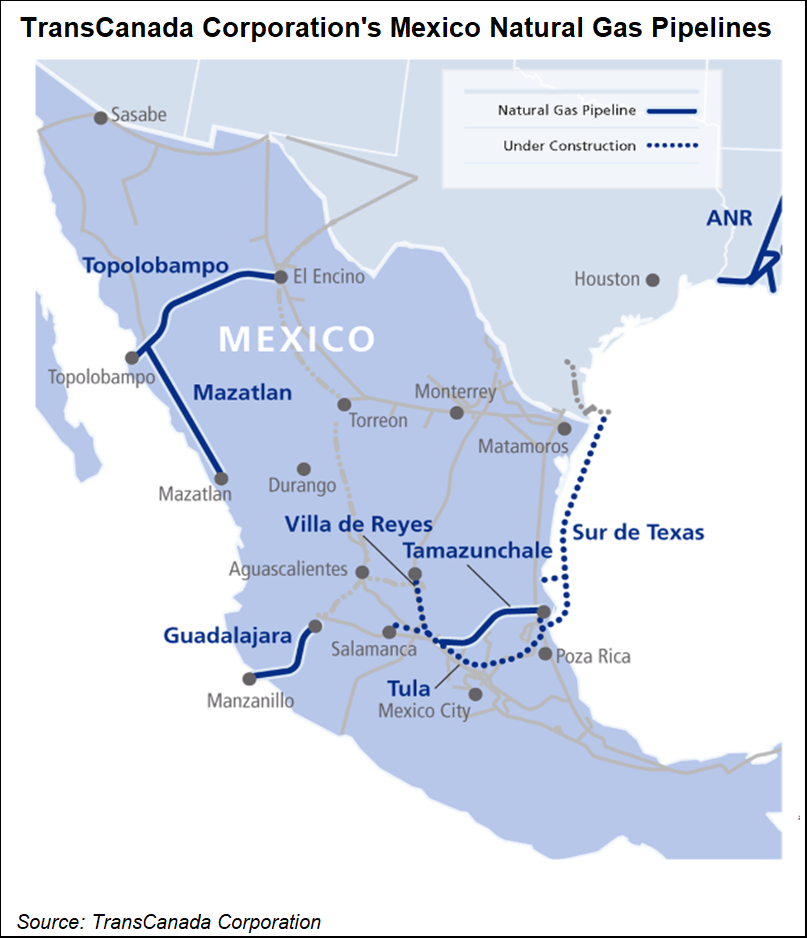 “Work has been halted in both pipelines in the State of Hidalgo,” TransCanada Mexico told NGI’s Mexico GPI via email. In the state of Puebla, “our works are awaiting the completion of [energy ministry] Sener’s indigenous consultations along specific areas of the route. We continue working in other areas of the projects. With the exception of the segments located in Hidalgo, our current completion targets for Villa de Reyes and Tula are the second half of 2019 and 2020, respectively.”

The company had previously targeted these dates for the projects to be entirely completed. Local media outlets quoted TransCanada Mexico spokespeople as saying that “extortion” and “irregular” payment demands by Hidalgo officials led to the decision to halt work.

In a subsequent email to NGI’s Mexico GPI, TransCanada said, “Given the circumstances that prevail in the state of Hidalgo, our two projects altogether have exceeded the estimated construction time by over 56 months and the costs associated to these delays. Our work continues in both projects in other regions as we evaluate our options regarding the current route through the state of Hidalgo.”

The Tuxpan-Tula project is “notable for its size,” but “our forecasts for Mexican supply and demand balances and U.S. exports to Mexico were not terribly influenced by Tuxpan-Tula,” Genscape Inc. analysts said. “The pipeline was designed to move gas imported from South Texas U.S. via the soon-to-be-operational, 2.6 Bcf/d Sur de Texas-Tuxpan pipeline, and delivered into power-and industrial-heavy markets in central Mexico…However, we had not been projecting major flows on the system as a slate of new pipelines targeting the same demand markets with Permian gas are expected to come online earlier in 2019.”

According to the top lawyer for CFEnergÃ­a and CFE International, the respective gas marketing and import arms of Mexican state power utility CFE, in general, local conflicts and opportunistic lawyers are impeding the rollout of Mexico’s natural gas pipeline grid.

Likening the attorneys to “ambulance chasers,” Herrera-Terrazas said, “I’m not going to name them, but we have seen the same lawyers following the people from the towns where the pipelines go through…to have a slice of the pie.”

Herrera-Terrazas highlighted four pipeline projects in particular that are facing these issues. The first was Tuxpan-Tula. He also cited Infraestructura EnergÃ©tica Nova’s Guaymas-El Oro pipeline, which was completed, then decommissioned, because of opposition by one out of eight groups of the local Yaqui tribe. The other seven gave their blessing to the project.

Mexican conglomerate Grupo Carso, meanwhile, is awaiting a court decision on a right-of-way dispute over its Samalayuca-SÃ¡sabe pipeline in Chihuahua and Sonora states.

The contract for ATCO Companies’ Tula branch pipe, also in Hidalgo, has been terminated and currently stands in arbitration.