TransCanada Corp. on Monday secured Ontario and Quebec cooperation with its Energy East plan for partial conversion of its Mainline to oil service by dropping attempts to load project costs onto natural gas distribution companies.

TransCanada, Enbridge Gas Distribution, Union Gas and Gaz Metro announced an agreement to end a fierce squabble over payment of up to C$1.5 billion (US$1.2 billion) to replace gas delivery capacity that will be lost in the conversion (see Daily GPI, Aug. 7).

“The agreement ensures natural gas customers will not subsidize the oil project. Rather, the construction and development cost risks for Energy East will be borne by the project’s proponents,” Enbridge, Union and Gaz Metro said in a statement.

In a formal complaint to the National Energy Board (NEB), Enbridge and Union said they alone were being required to accept up to C$600 million (US$460 million) in oil conversion liabilities as part of 2016 and 2017 contracts for Mainline service.

The complaint sought an order from the NEB for TransCanada to “cease and desist” the alleged cross-subsidization of Energy East. The Ontario and Quebec energy ministries supported Enbridge and Union.

The settlement announced today not only shifts the Energy East burden back to TransCanada and oil shippers. The deal also pledges to provide “a benefit” of C$100 million (US$77 million) to the distribution companies’ franchise areas in southern and eastern Ontario and Quebec by 2010 if the conversion project goes ahead.

The nature of the benefit was not disclosed. The deal was described as an agreement in principle. Provisions include a target date of Oct. 30 for fleshing out all details in a final definitive agreement.

TransCanada’s original Energy East cost forecasts added up to C$13.5 billion (US$10.4 billion): C$12 billion (US$9.2 billion) for partial conversion of its old gas Mainline to 1.1 million barrels per day in oil service and an extension to an east coast tanker port, plus C$1.5 billion (US$1.2 billion) for the new gas Eastern Mainline.

But the pipeline company, in its summer financial statement on first-half 2015, warned its shareholders to expect cost increases. Amounts will only become known as the project evolves. The schedule calls for amended plans to be submitted to the NEB by the end of this year.

TransCanada president Russ Girling added, “It has always been our intent to ensure our customers in Québec and Ontario would receive the gas they needed and we have done that through this agreement. We have also maintained that re-purposing a portion of the Canadian Mainline for Energy East would make the system more efficient and reduce transportation costs to our customers. We are pleased to honor our commitments.” 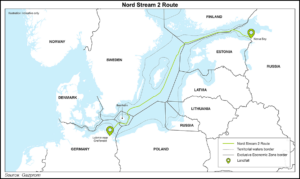