Canadian imports of U.S. natural gas will keep on growing as horizontal drilling and hydraulic fracturing increase production in the eastern United States, according to TransCanada Corp. 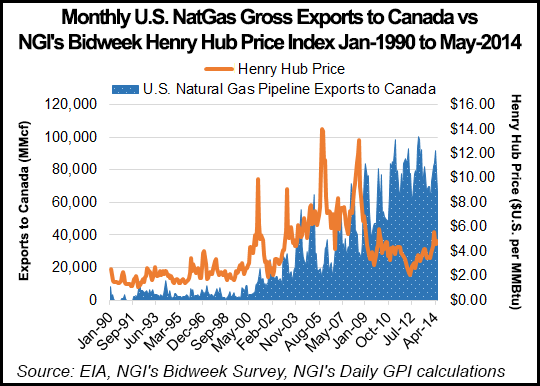 The prediction figures in a construction application for C$227 million (US$204 million) in additions to TransCanada’s gas network on the western fringe of Toronto as a key stretch of the Ontario and Quebec pipeline network for U.S. exports.

In the construction application sent to the National Energy Board (NEB), TransCanada said King’s North is part of its settlement on overhauling services and tolls with the top Canadian distribution companies: Union Gas in southwestern Ontario, Enbridge Gas in the Toronto-Ottawa region and Quebec’s Gaz Metro (see Daily GPI, Feb. 7).

Rather than only one factor — price, transportation tolls or demand growth — King’s North grew out of a dimension that has been added to the central Canadian gas market by access to eastern U.S. shale production: competition. “The project is driven by market demand for diversity in supply,” TransCanada said.

The Calgary-based pipeline conglomerate points to development of the Marcellus and Utica shale formations in Pennsylvania, West Virginia and Ohio as permanent rivals to Alberta fields that Ontario and Quebec have relied upon since the 1950s.

“The recent development of the Marcellus and Utica basins in the U.S. Northeast represent economic and growing supplies of natural gas that are close to the Eastern Canadian markets,” TransCanada said. “The project will facilitate greater access to these U.S. sources of supply and will serve existing markets in Ontario and Quebec that are expected to remain relatively stable over time.”

In the NEB application, TransCanada said it is likely erring on the conservative side to credit the Marcellus/Utica formations with a combined 157 Tcf of economically usable gas. Current Utica estimates of 16 Tcf are likely to grow as industry gains experience with the drilling targets, the company predicts.

Combined production from the two eastern U.S. shale formations currently looks on track to grow to 20 Bcf/d as of 2025, said TransCanada. The volume forecast to be available from the two new U.S. sources is 18% more than all Canadian output of 17 Bcf/d at its peak a decade ago.

“Such rapid change is unprecedented in the gas industry, where new sources of gas supply have tended to evolve and mature over decades,” said TransCanada. “Shale production in North America, in a short period, has changed the dynamics of continental flow away from traditional pipeline transportation routes.”

Effects on Canadian pipeline traffic, costs and tolls continue to be thrashed out. In a parallel case before the NEB, TransCanada is seeking approval of settlement provisions with the Ontario and Quebec distribution firms that would affect tolls on King’s North.

Residential, commercial and industrial gas demand in Ontario and Quebec appears likely to stay in its current range of 2.9-2.95 Bcf/d for the foreseeable future, said TransCanada.

But in addition to replacing Alberta supplies, U.S. exports will also be able to chase a demand growth niche. Central Canadian consumption of gas as fuel for thermal power generation plants is forecast to double to 800 MMcf/d by 2030.

U.S. gas exports to Canada already doubled over the past seven years and have been hovering at annual highs just under 1 Tcf since 2012.

King’s North is one in a series of improvements planned for the northbound freeway network for U.S. shale production. A construction application is coming soon for a bigger addition that TransCanada calls its Eastern Mainline Expansion, which would have room for 1.2 Bcf/d on 370 kilometers (230 miles) of new pipe 914 millimeters (36 inches) in diameter across eastern Ontario. Deliveries are scheduled to start Nov. 1, 2016, a year after King’s North goes into service.

The further expansion grew out of Canadian demand for increased import capacity as well as a replacement for the proposed partial conversion of TransCanada’s gas Mainline to oil service by its proposed Energy East project.