TransCanada Corp.’s El Encino-Topolobampo Pipeline project in northwestern Mexico is nearly complete with the exception of a “small portion” that was delayed by negotiations with indigenous people. 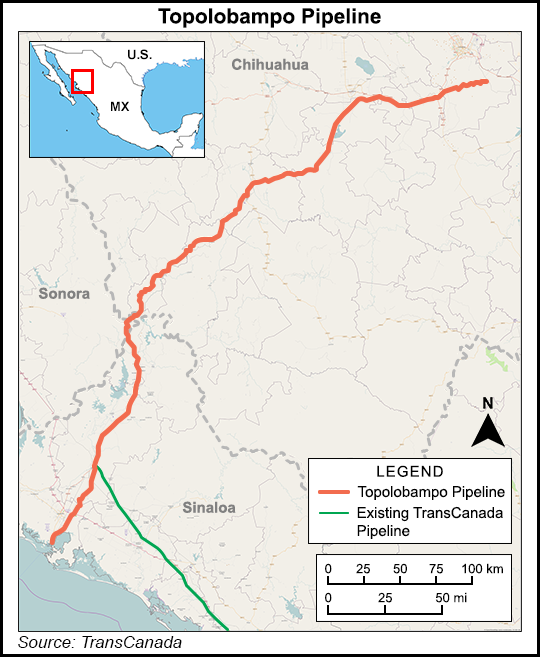 The pipeline interconnects with TransCanada’sMazatlÃ¡n Pipeline project to create the El Encino-MazatlÃ¡n system. It “is one of the most ambitious and challenging natural gas pipeline projects in the country’s history,” TransCanada says on the project’s website.

“Due to the geographical challenges posed by crossing the Sierra Tarahumara, the project is being built using state-of-the-art technology and innovative construction techniques.

“When complete, the 560-kilometer (348-mile) 30-inch diameter pipeline will help connect the states of Chihuahua and Sinaloa, supplying numerous communities along the way.” According to TransCanada’s website, capacity is 670 MMcf/d.

TransCanada won the $1.1 billion contract with CFE for the project in 2012.

The El Encino-MazatlÃ¡n system is composed of two parts: El Encino-Topolobampo, and El Oro-Mazatlan, which would provide 202 MMcf/d of capacity via a 30-inch diameter, 430-kilometer (267-mile) pipeline for a power plant in Mazatlan.

“The El Encino-MazatlÃ¡n system is considered as an important trigger of industrial, economic and social development of the state of Sinaloa, since it will provide access to natural gas to companies and populations in the state,” TransCanada’s website says.