TransCanada Corp. is acting swiftly to grab the pipeline action in the next western drilling hot spot, the 130,000-square-kilometer (52,000-square-mile) Montney shale formation in northern British Columbia and Alberta. 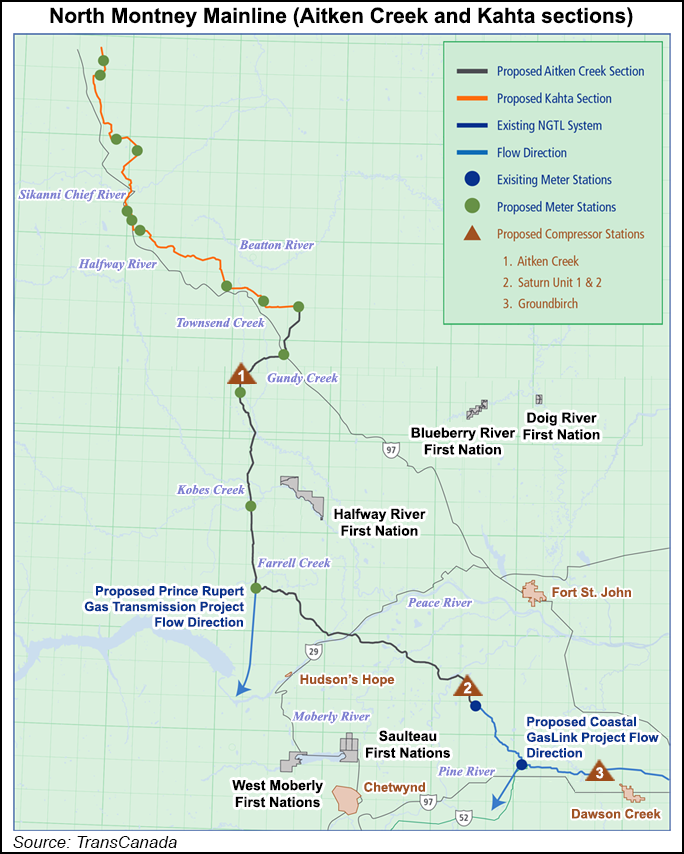 On the heels of a Nov. 6 glowing report on the vast structure’s natural gas, liquids and oil treasures by federal and provincial agencies, TransCanada’s supply grid in Alberta and BC, Nova Gas Transmission Ltd. (NGTL) filed a construction application (see Shale Daily, May 7).

The growth plan, titled the North Montney Mainline, calls for laying 305 kilometers of 42-inch pipe for C$1.67 billion (US$ at par) in time to start deliveries in April 2016.

Gas traffic, flowing into the line via 13 inlets or “receipt points” across BC’s 20,720-square-kilometer (8,000-square-mile) share of the Montney formation, is scheduled to reach more than 2 Bcf/d as of 2019.

The “marketable” treasure that can be produced from the Montney with currently known technology is an astronomical 449 Tcf of gas, 14.9 billion barrels of liquid byproducts and 1.1 billion barrels of oil, said the Nov. 6 report by the National Energy Board (NEB), the BC Oil and Gas Commission and the Alberta Energy Regulator.

The main committed customer that is supporting the NGTL and TransCanada projects — the Pacific NorthWest LNG terminal sponsored by Progress Energy, the Canadian arm of Malaysia’s state-owned Petronas — plans tanker exports of 2.7 Bcf/d.

But TransCanada’s Prince Rupert conduit is designed to deliver up to 3.6 Bcf/d to the port it is named after. BC has received bids for sites for up to four LNG terminals on a spread of government-owned land in the area known as Grassy Point, and early this week awarded the first location to the Aurora project sponsored by China National Offshore Oil Corp. and its Canadian arm, Nexen Energy.

NGTL’s construction application to the NEB describes the proposed North Montney Mainline as an element in an emerging northern shale production network enhancing development prospects for the entire supply side of the Canadian gas industry.

The proposal promises, “This project will stimulate growth of existing and new production areas in the Western Canada Sedimentary Basin (WCSB), provide access to new longer term markets for WCSB gas, enhance operational flexibility for producers, and increase liquidity within BC and other North American markets. It will also provide NGTL customers with increased market choice, and optionality.”

The North Montney Mainline’s design includes “bidirectional” compressors that will enable the pipe to flow BC gas east into NGTL’s Alberta grid as well as west to coastal LNG tanker terminals. Use of the system will depend on customer needs, says the construction application. Traffic on the Alberta system averages 10 Bcf/d and flows across North America to markets from California to New England.

NGTL predicts two of the 10 entries in the Pacific coast LNG terminal lineup, known in BC. as “the race to Asia,” will be loading tankers with 2.6 Bcf/d in 2020. Additional projects will raise overseas export cargos to 4.3 Bcf/d as of 2025, the forecast says. NGTL does not identify which LNG projects it rates as most likely to succeed.