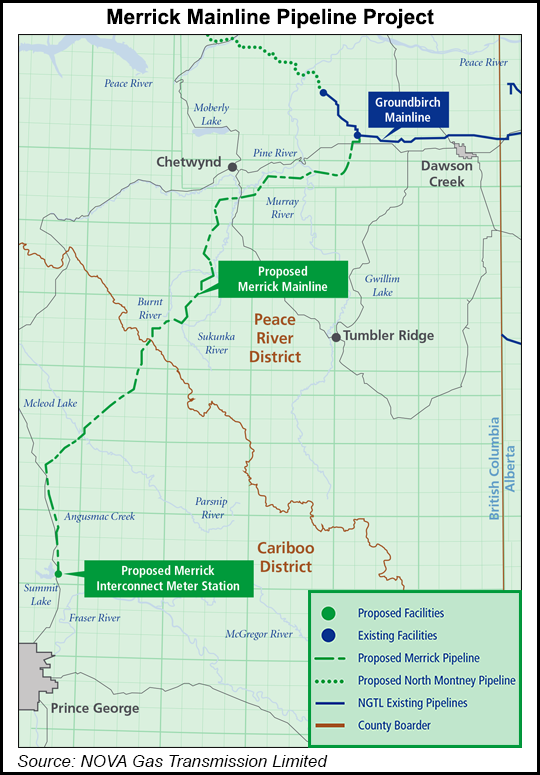 For a forecast C$1.9 billion (US$1.7 billion), the new pipe up to 48 inches in diameter is projected to deliver about 1.9 Bcf/d to LNG export terminals proposed in the Prince Rupert region. NGTL has inked agreements with Chevron Canada Limited (CVX) and an Apache Canada Ltd. wholly-owned and controlled partnership (APA) for 1.9 Bcf/d of firm natural gas transportation services to underpin the development of a major extension of TransCanada’s NGTL system.

The pipeline will transport natural gas sourced through the NGTL System to the inlet of CVX/APA’s proposed Pacific Trail Pipeline that will terminate at the Kitimat LNG Terminal at Bish Cove near Kitimat, BC. The proposed project will be an extension from the existing Groundbirch Mainline section of the NGTL System beginning near Dawson Creek to its end point near the community of Summit Lake, BC.

“The Merrick Mainline Pipeline Project will be designed, constructed and operated utilizing TransCanada’s extensive experience in developing safe and reliable energy infrastructure,” said TransCanada CEO Russ Girling. “We now have four major natural gas pipeline projects under development in the region totaling $12.6 billion in investment, and we are committed to ensuring they are all built responsibly and with minimal environmental impact.”

Counting three older proposals – called North Montney Pipeline Project (see Shale Daily, Nov. 15, 2013), Coastal GasLink Pipeline Project (see Daily GPI, June 6, 2012) and Prince Rupert Gas Transmission Project, only one entry in the four-part package, North Montney, has reached the stage of an active construction application before the NEB. The leading entry connects a liquids-rich shale formation that it is named after into NGTL facilities for both BC and Alberta, and does not depend entirely upon completion of an LNG export terminal.

“The initial work for the [Merrick] project is proceeding well, and we anticipate filing an application with the National Energy Board in the fourth quarter of 2014 for approvals to build and operate the project,” Girling said. “Subject to the necessary approvals, we expect the Merrick Mainline to begin service in the first quarter of 2020.”

Under the deals with CVX/APA, delivery volumes will ramp up between 2020 and 2022 to an aggregate volume of approximately 1.9 Bcf/d. NGTL noted that it is also in discussions with other parties that have expressed interest in transporting natural gas on the Merrick Mainline.

TransCanada called the Merrick Mainline “a key component” of the company’s capital growth plan, which includes $38 billion in commercially secured projects expected to be completed by the end of the decade.

The lineup of jumbo BC gas export projects also includes rival proposals on a similar grand scale by the province’s traditional delivery mainstay, Spectra Energy’s Westcoast gas transmission network. TransCanada entered the BC pipeline services market about seven years ago, after the Alberta government enabled extensions to the NGTL web by agreeing to transfer jurisdiction over it to the NEB, a step that effectively reclassified the gathering network as a national service.

None of the 10 BC coast terminal projects that have reached the stage of obtaining gas export licenses from the NEB have secured overseas customers for all their proposed tanker deliveries or set firm dates to start construction. A tax regime for LNG export terminals is under negotiation with the BC government, which has promised to announce rates by November.