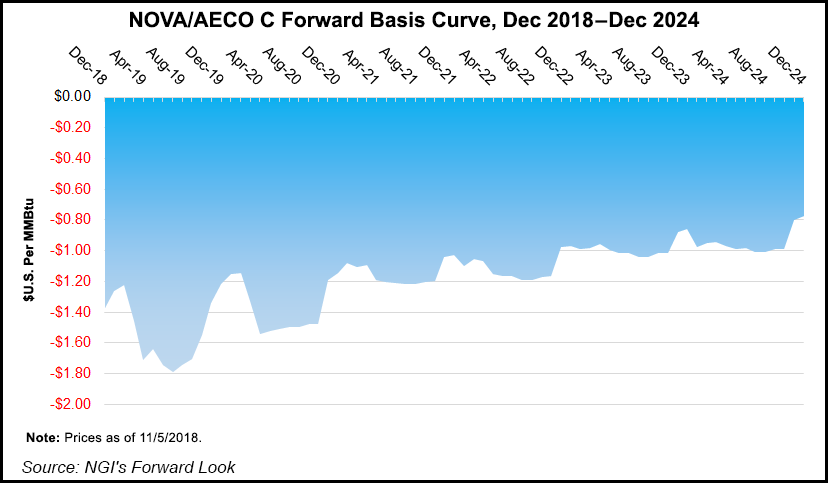 The next package, scheduled for completion in 2022 for C$1.5 billion (US$1.2 billion), includes 197 kilometers (122 miles) of large-diameter pipe and three compression units capable of carrying 1.1 Bcf/d.

Along with natural gas markets across Canada and the United States, delivery targets include Alberta thermal oil sands and power plants, petrochemical complexes, other industrial consumers and public utility franchises, according to TransCanada.

A mid-2019 target has been set for a detailed construction application to the National Energy Board (NEB), with work planned to start as early as the fall of 2020.

The additions program is a case of catching up to supply development patterns rather than just increases in total Canadian gas production. Although NGTL has evolved a 24,012-kilometer (12,920-mile) pipe web spanning the region since the 1950s, growth has lately concentrated in new northern development areas.

A new NEB market assessment describes a gas supply backlog that has emerged in the current Canadian drilling hot spot, the liquids-rich Montney Shale formation straddling the northern boundary between B.C. and Alberta.

“As production shifts westward in western Canada to access the sources richer in condensate and [natural gas liquids], pipeline capacity has not kept pace with production,” the NEB said.

“Additional pipeline capacity is being constructed in those areas. The construction can cause interruptions to existing pipeline capacity resulting in periods when some gas in western Canada is sold at very low or even negative prices to find a market.”