TransCanada Corp. plans to build a friendly relationship with Mexico’s next government to advance its various natural gas pipeline projects in the next few years, a top executive said last week. 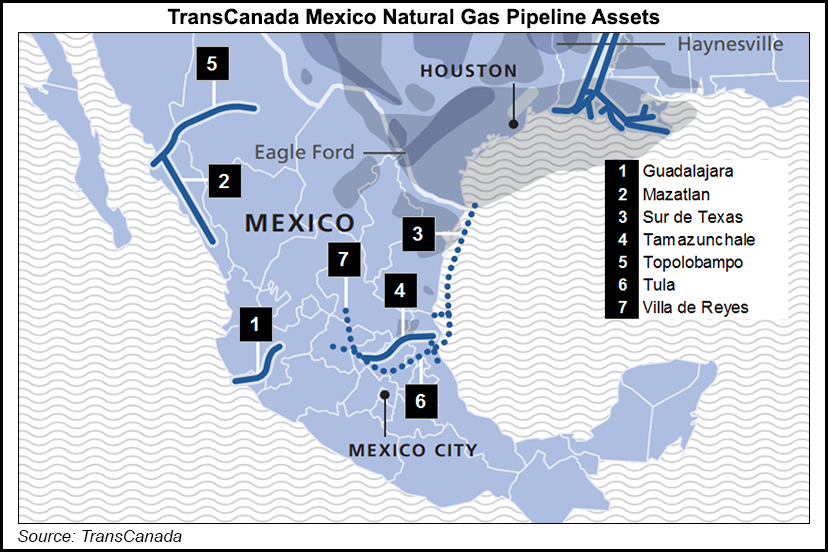 Valuation of the country’s currency, bonds, and top stocks tumbled on the news, which left analysts wondering whether similar disruptive measures could be expected in the energy sector.

TransCanada has three natural gas pipelines now under construction in Mexico at a combined total cost of about $2.9 billion. During a conference call with financial analysts to discuss third quarter performance, Executive Vice President Karl Johansson, who oversees Canada and Mexico natural gas, attempted to allay any concerns about the company’s work south of the border.

“I’m aware of the issue that you’re talking about,” he said in response to a question about the recent volatility. The management team plans to have more in-depth conversations with the new administration after LÃ³pez Obrador is sworn in on Dec. 1. “But from where I sit right now, their natural gas [import] strategy…is very important for the future growth of the Mexico economy.”

Johansson cited the outgoing government’s plan to replace fuel oil-fired power plants with affordable and less polluting gas-fired capacity, as well as the importance of gas for industrial consumers.

“So my expectation is that the [new] government will work with us to make sure that this infrastructure plays an important part in this economy,” Johansson said. Once the projects are in place, the management team expects “we’ll be working well with the government to make sure that these gas pipelines are fully utilized and the benefits to Mexico are realized through the work we do.”

The undersea Sur de Texas-Tuxpan pipeline, a joint-venture with IEnova for which offshore construction was completed in May, is expected to enter service by the end of the year, TransCanada CEO Russell Girling said during the call, although IEnova executives said during their 3Q2018 earnings call on October 25 that a start-up date in early 2019 is more likely.

TransCanada’s Tula-Villa de Reyes and Tuxpan-Tula pipelines in Mexico are expected to enter service in 2019 and 2020, respectively, Johansson said.

To meet demand from the power and industrial segment, Mexico has been forced to ramp up imports of both piped gas from the United States and liquefied natural gas from global suppliers because of declining domestic oil and gas output by national oil company PetrÃ³leos Mexicanos (Pemex).

Construction of TransCanada’s C$6.2 billion ($4.73 billion), 420-mile Coastal GasLink Pipeline (CGL) project in British Columbia is expected to begin in January, with a planned in-service date of 2023. All necessary permits have been received for the project, which will supply the $31 billion LNG Canada gas export terminal, a joint venture led by Royal Dutch Shell plc.