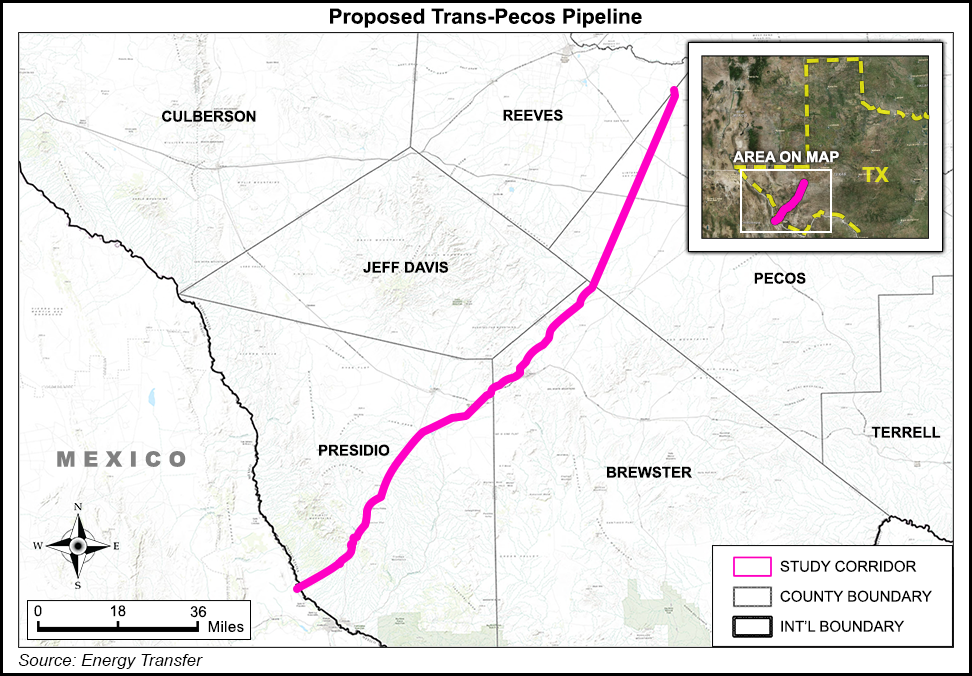 Both projects would enable Texas gas to flow to Mexico to meet power generation and industrial demand.

Trans-Pecos has garnered widespread opposition from landowners and environmentalists concerned about the Big Bend National Park. Parties filing comments in the proceeding [CP15-500] focused mostly on the larger pipeline project, even though it is outside the jurisdiction of the Federal Energy Regulatory Commission. Project opponents had appealed to the Commission to produce a more rigorous environmental impact statement (EIS) for the entire pipeline, not just an EA for the jurisdictional border crossing (see Daily GPI, July 27, 2015).

Trans-Pecos Pipeline LLC, a project of Energy Transfer Partners LP and Mexico-based Carso, filed its application for the border crossing at Presidio County, TX, with FERC on May 28, 2015. The proposed facilities have a design capacity to export up to 1.3 Bcf/d of natural gas at the International Boundary between the United States and Mexico.

Commission staff said 653 individual stakeholder comments were received. “The overwhelming majority of the comments raised by individual stakeholders, including those of Congressman [Will] Hurd, and State Representative [Jose] Rodriquez, as well as the cities of Alpine and San Elizario, Brewster County, the Sierra Club, the Big Bend Conservation Alliance, the NPS Big Bend National Park, and the Rio Grande International Study Center, pertained to Trans-Pecos’ planned 148 miles of intrastate pipeline through Pecos, Brewster and Presidio counties, TX,” FERC staff said.

“Specifically, comments addressed the ecological uniqueness of the Big Bend area, including the Big Bend National Park; Fort Davis National Historic Center; Davis Mountain State Park; and the Chianti Mountains. Commenters also requested that the FERC assume federal jurisdiction for the Trans-Pecos intrastate pipeline, along with that of the FERC jurisdictional Presidio Border Crossing Project. The FERC has not assumed jurisdiction for the intrastate pipeline facilities; therefore the scope of the proposed action in this EA is the Presidio Border Crossing Project.”

One of those commenting on the project was Coyne Gibson of the McDonald Observatory of Texas and a member of the Big Bend Conservation Alliance. Last May, Gibson told NGI he had little hope of stopping the pipeline project but he would do whatever he could (see Daily GPI, May 21, 2015). Persuading FERC to review the entire project rather than just the border crossing was a key strategy of the pipeline’s opponents.

Leading up the the border crossing EA, “…the Big Bend Conservation Alliance, along with several other individual stakeholders commented that the FERC should conduct an EIS for the project, and should include in its NEPA [National Environmental Policy Act] evaluation the Trans-Pecos intrastate pipeline and the planned Comanche Trail Pipeline LLC intrastate pipeline that would extend from the Waha Hub to San Elizario in El Paso County, TX [see Daily GPI, Aug. 4, 2015].” FERC staff said.

Commission staff on Monday also released a favorable EA for the Comanche Trail Pipeline project’s Texas-Mexico border crossing facilities, finding that they would not have a significant impact on the environment [CP15-503].

Comanche Trail plans to construct a 195-mile, 42-inch diameter intrastate pipeline from the Waha Hub to delivery locations with local towns and utilities in South Texas. The pipeline would terminate with the San Elizario Crossing Project. The crossing project entails about 1,800 feet of 42-inch diameter pipeline installed under the Rio Grande near the Mexican city of San Isidro in the state of Chihuahua. Gas traveling on the project would serve power generation and industrial demand in Mexico.

Despite the significant interest in and concern surrounding Trans-Pecos, FERC staff said the jurisdictional border crossing did not present a threat to the environment.

The border crossing is not located within a segment of the Rio Grande currently designated as or proposed as a candidate for the National Wild and Scenic River Program, staff said. “The impacts of the Trans-Pecos Border Crossing Project activities would be short term and include minimal localized ground disturbance. All land disturbed would be restored to its previous condition after construction. Therefore, impacts from the border crossing activities would not contribute meaningfully to cumulative impacts in the area.”

The findings for the Comanche Trail border crossing were similar.