After 68 months of contested hearings, an appellate court setback, a government takeover and two federal cabinet approvals, an extra step will prolong the Canadian regulatory ordeal of the Trans Mountain Pipeline expansion. 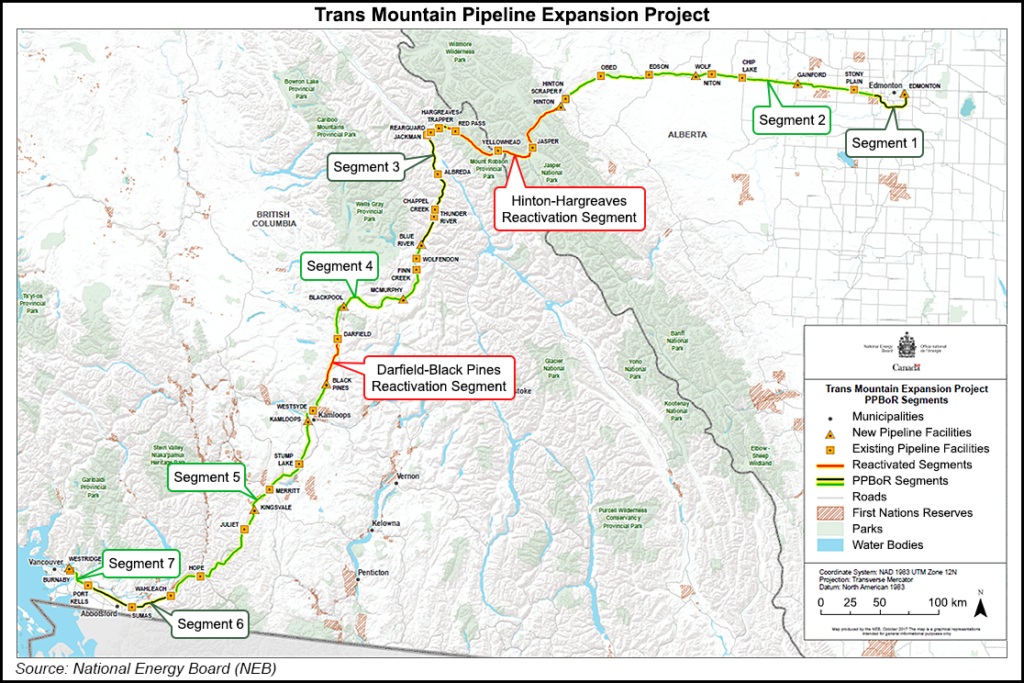 A new ruling by the National Energy Board (NEB) ordered the project to give a second chance to object to all 2,800 landowners along the oil conduit’s 1,147-kilometer (688-mile) route across Alberta and British Columbia (BC).

Trans Mountain made no construction date predictions after the ruling late Friday. Instead the pipeline said only that the new regulatory directive, its effects on project processes and work schedules will be reviewed in the weeks ahead.

Another decision is awaited. The NEB has yet to rule on a request to let construction begin Aug. 5 at the line’s Edmonton inlet and Burnaby outlet in Vancouver Harbor, and Sept. 1 on the pipe. Delaying the start dates would postpone the work until the 2020 construction season, said Trans Mountain.

The landowner consultation order reopens a lengthy exercise known as the detailed route hearing on project plans, profiles and book of reference. Known as PPBOR for “plan, profile, book of reference,” the process specifies construction locations, methods and timing.

Trans Mountain’s PPBOR proceeding was 20 months old and 73% complete when the Canadian Federal Court of Appeal stopped the clock last August by ordering the NEB and the cabinet to conduct a second expansion project review.

The new NEB ruling promised only to grant repeat landowner hearings in demonstrated cases of material changes in circumstances since the court verdict. The definition of changes needed to open second rounds was left open to argument. Native reserves crossed by construction have automatic PPBOR review rights.

The NEB ruling granted a Trans Mountain request to reject a claim by pipeline opponents that the 2018 court verdict meant the entire project approval process has to start over from scratch.

But the pipeline told the NEB that repeating the PPBOR stage would also spell trouble.

“Requiring Trans Mountain to submit, publish and serve new PPBORs would result in unnecessary duplication and delays, and risk undermining the significant efforts that have been taken by Trans Mountain and other parties to settle the detailed route.”