An extra C$20 million ($15 million) has been added to construction costs of the Trans Mountain Pipeline expansion for a detour around a southern British Columbia (BC) native tribe, according to evidence before the Canada Energy Regulator (CER). 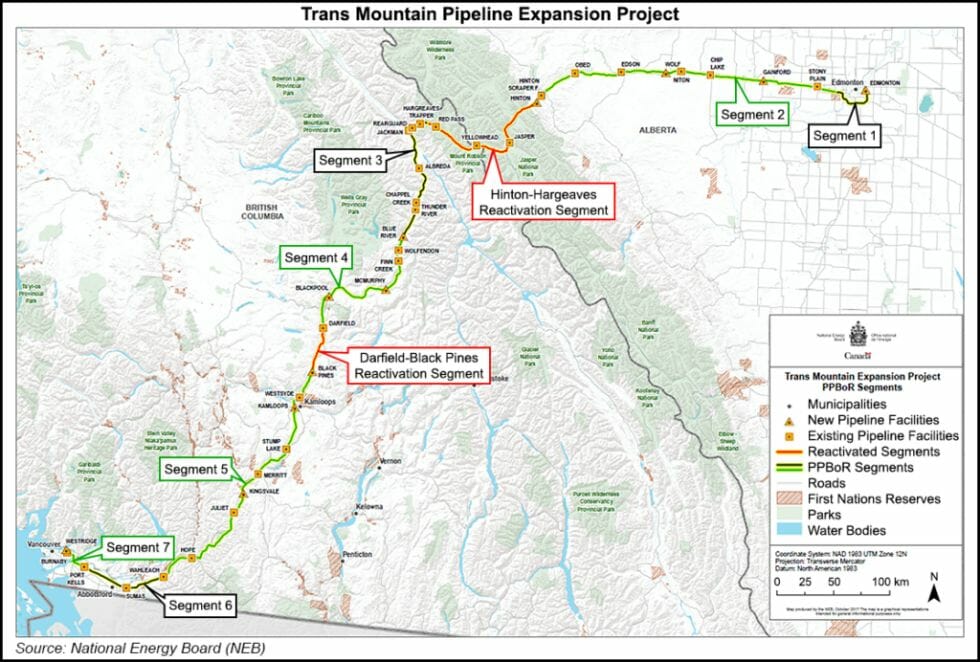 The oil pipeline’s route change raises the expense of steering the project past the Coldwater Indian Band to C$70 million ($52.5 million) from C$50 million ($37.5 million), Trans Mountain disclosed in a reply to a CER information request.

The extra bill is a relatively small addition to the total cost of expanding Trans Mountain as an export route for Canada’s top natural gas user, Alberta thermal oilsands production.

The added expense of the Coldwater detour is just 1.6% of the C$12.6 billion ($9.4 billion) current estimate for nearly tripling capacity to 890,000 b/d on the pipeline from Alberta to a tanker port in Vancouver Harbor.

The detour, now going through the CER approval process, would settle a seven-year feud over the project route. Coldwater fought the original plan to use the established right-of-way along the east side of its reservation as a threat to the tribal water supply.

The proposed settlement, a new right-of-way west of the reservation, emerged after the pipeline and tribal chiefs agreed to stop butting heads and engage in a meeting of the minds, according to Trans Mountain’s CER application for the detour.

“Since May of this year, Trans Mountain president and CEO Ian Anderson has been meeting regularly with Chief Lee Spahan of Coldwater, attempting to reach consensus on routing,” the application said.

“In early October, Coldwater confirmed that the west alternative route for the TMEP [Trans Mountain expansion project] addresses its concerns regarding potential impacts to the aquifer used by the Coldwater community.”

In addition to written support from Coldwater and seven other southern BC tribes, the detour has won a favor from the owner of the pipeline, Canada’s federal government.

Natural Resources Canada has served notice that it will refrain from using its authority under the Canada Energy Regulator Act to require time-consuming cabinet review of any CER detour approval and possibly add conditions.

The federal ministry’s decision not to interfere enables Trans Mountain to hit a detour construction start target of August 2021, in order to complete the full 1,150 (690-mile) project on schedule the following year.

The only qualification of the detour consensus between Trans Mountain and the BC natives is that Coldwater says its continued support remains subject to engagement by the tribal leadership with its community.

About four-fifths of the 18.3-kilometer (11-mile) detour crosses provincially owned BC public land. The provincial government has not intervened in the approval case to date. The BC Oil and Gas Commission controls construction permits on the provincial property.