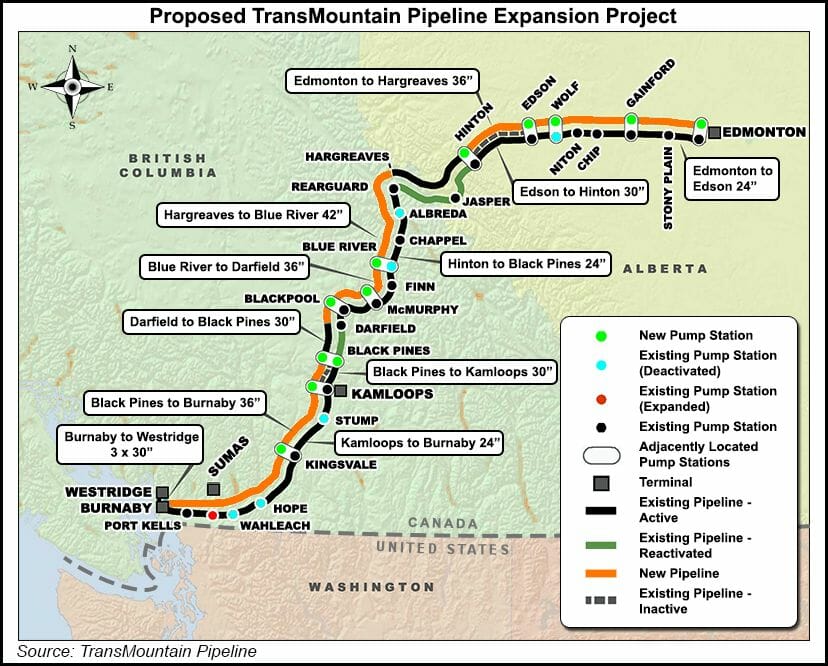 During Edmonton meetings, Alberta Premier Rachel Notley voiced frustration and held back from restoring support to Trudeau. In their discarded bargain she endorsed his environmental agenda in exchange for federal approval of the overseas export project.

“We absolutely cannot be held hostage to a regulatory merry-go-round that never ends,” she said. After a meeting behind closed doors with Trudeau, she let her annoyance show by giving only a two-word comment when asked how it went: “It was.”

The Canadian government’s decision to buy the pipeline was completed last week even after a unanimous ruling by a federal appeals court, which concluded that the government’s review was flawed and said Indigenous groups had not been adequately consulted.

The C$4.5 billion ($3.6 billion) deal closed last Friday (Aug. 31) and on Tuesday, Kinder Morgan Inc. (KMI) announced that its share of the proceeds, valued at about US$2 billion, would be used to pay down debt.

“We’ve done the work we need to do to delever our balance sheet,” KMI CEO Steve Kean said Wednesday at the Barclays CEO Energy-Power Brokers Conference in New York. “We are where we need to be, and that allows us to turn our attention to finding new projects, new opportunities to invest our capital and, to the extent we exhaust those opportunities, to return capital to our shareholders.”

The remaining assets for Kinder Morgan Canada Ltd. (KML), which are underpinned by multi-year take-or-pay contracts, include the Edmonton terminals, the Cochin Pipeline and the Vancouver Wharves terminal. Edmonton is expanding the Base Line Terminal, which is ahead of schedule and under budget, according to Kean. The expansion is expected online in 2019.

KML also recently secured an expansion of the Vancouver Wharves terminal that is supported by 20-year take-or-pay contracts. That expansion is due online mid-2020.

“This is a business that we like,” Kean said. “They’re good midstream assets, and we can certainly continue to invest in them and grow them. However, all alternatives will be considered.” He noted that there are plenty of midstream players, including those with complementary positions, that KML expects to be interested. The company plans to explore its options over the coming months.

“We’ll always be in a position of not having to say yes to anything. We can always say no because the assets themselves will stand on their own,” Kean said.

The Canadian government in May agreed to buy the KML Trans Mountain oil pipeline project, at least temporarily, to ensure an oilsands conduit via the TMEP could be built from Alberta to the southern Pacific coast of British Columbia (BC).

Notley also showed irritation with the court’s fence-sitter verdict on aboriginal power: No, tribes have no veto, but yes, protester factions can stop industry by complaining that consultations fall short of constitutional requirements and legal precedents.

“I reject a scenario that has us talking until everybody says ”yes.’ That’s not how it can work,” Notley said.

The Alberta premier again demanded an immediate final appeal to the Supreme Court of Canada. Notley added that her regime is working on ways to revive the project with or without federal help, but did not disclose the plans under review.

On talk radio and at a rally by the Edmonton arm of his national Liberal party, Trudeau likewise said options are under review but revealed no actions. He portrayed the verdict by the Canadian Federal Court of Appeal as just charting a new course that his administration already knew the pipeline would have to take.

Trudeau, paraphrasing the court ruling, observed it “says ”you need to do better and deeper consultation with indigenous peoples if you want to get projects like this built, and you have to make sure you’re taking into account all the environmental impacts.’ This is something I’ve been saying for a long time.”

But surprised industry and regulatory veterans, while obeying professional etiquette that forbids negative public comment on the courts, privately cited contrasts between the TMEP lawsuit verdict and practical sides of the quashed expansion approval.

The verdict said the National Energy Board (NEB) “made one critical error” that tainted federal cabinet ratification of the pipeline approval, spoiling an essential last step toward construction.

“The board unjustifiably defined the scope of the project under review not to include project-related tanker traffic,” said the verdict.

In response, the energy sector veterans pointed to a section in the NEB decision that examined effects of increased tanker traffic on the Pacific and its denizens. The ruling ordered TMEP to devise a marine mammal protection program in continuing cooperation with all concerned, including native communities.

Despite protests in court to the contrary, the record of the pipeline’s regulatory ordeal is also studded with accounts of native consultations. On top of sessions with the firm, tribes were granted special aboriginal oral hearings in Alberta and BC communities.

A legal appeal of the negative verdict is an option, Trudeau said. But he was more enthusiastic about current legislative proposals for NEB and environmental regulation reform.

“People want to know that we are doing things the right way for the long term, that jobs that get started will continue and won’t get stopped by the courts,” he said. “That’s the change we are focused on making.”

Trudeau went out on a limb in favor of the pipeline expansion well before his government bought the challenged project this spring. In announcing cabinet ratification of the NEB project approval in late November 2016, the prime minister declared, “There isn’t a country in the world that has billions of barrels of oil and leaves it in the ground.”