The possibility that one deepwater oil export project may have the funding to advance offshore Corpus Christi in South Texas has gained momentum as global commodities trader Trafigura Group Pte. Ltd. has thrown in with Phillips 66 to advance a project already in the permitting stages. 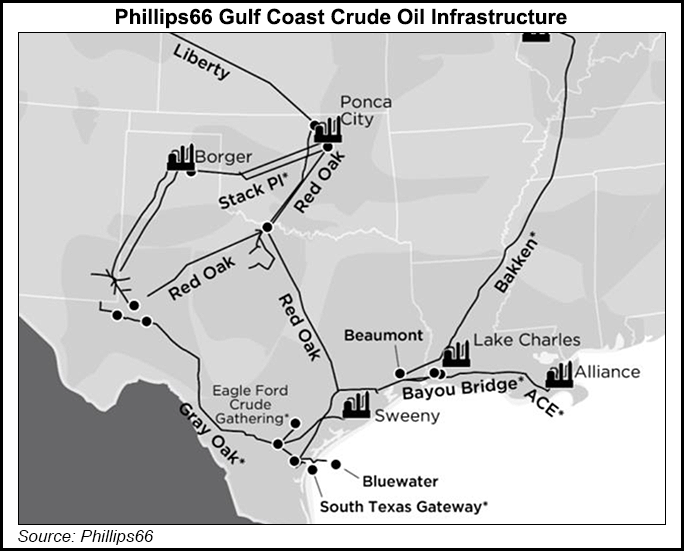 Bluewater, to be sited about 21 nautical miles offshore the Corpus port, is to have up to two single point mooring buoys capable of loading very large crude carriers (VLCC) to export crude, according to Houston-based Phillips 66.

A final investment decision by the Bluewater partners is planned later this year, pending permit approval and customer volume commitments that “support the project meeting the owners’ economic return thresholds.”

Bluewater “combines the unique market position that Trafigura has built in the United States as a leading exporter and marketer of crude oil with Phillips 66’s commercial expertise, existing infrastructure network on the U.S. Gulf Coast, and proven operating experience,” said the partners.

The JV is working with the Port of Corpus Christi Authority to advance what would be an “environmentally sustainable infrastructure” to move North American oil overseas.

A bevy of oil export projects offshore Texas has been in the works for the past couple of years to serve the pipeline blitz, with several moving supply south to the coast from the Permian Basin and Eagle Ford Shale.

Houston-based Axis Midstream Holdings LLC has one oil export project on the table that would be sited on Harbor Island in Port Aransas, according to the U.S. Army Corps of Engineers. The project, however, has received substantial pushback by area residents as Port Aransas is a tourist and fishing mecca.

In early 2019 the Army Corps awarded its first contract for the Corpus Christi Ship Channel Improvement Project to deepen the port and expand the waterway for additional traffic. An export hub in Ingleside, in the northeast corner of the Corpus port, now is able to partially load VLCCs. The Louisiana Offshore Oil Port, or LOOP, offshore Port Fourchon, LA, is the only existing U.S. terminal that may now fully load a VLCC.