The prospect of large winter price premiums and the challenge of infrastructure bottlenecks are driving traders and utilities to stash LNG volumes at sea, ballooning the levels of floating gas in storage to a two-year high and sustaining lofty charter rates. 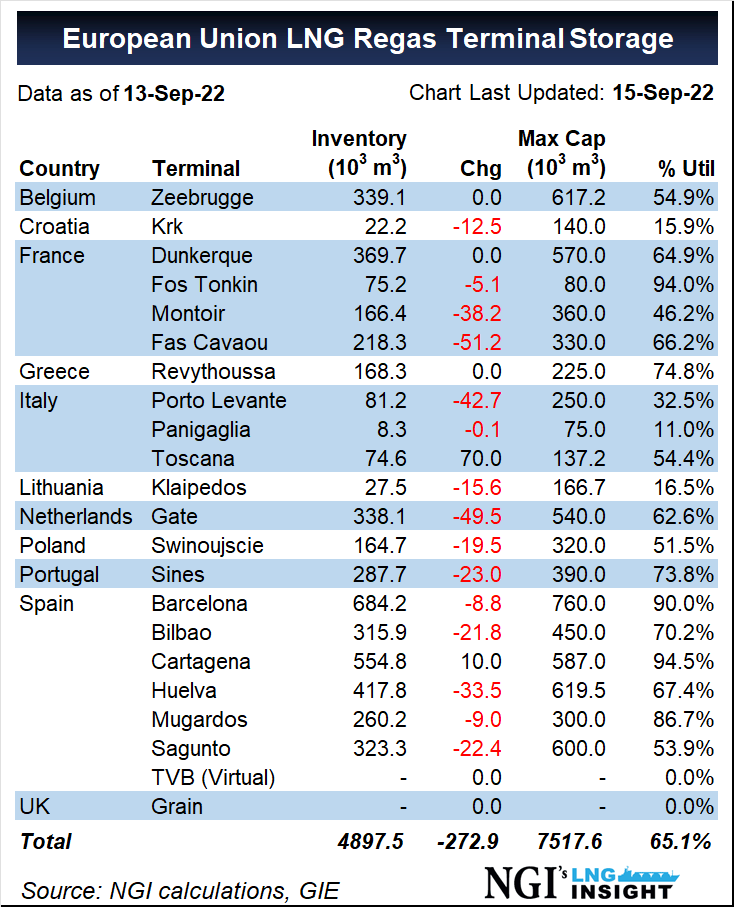 Kpler’s Charles Costerousse, market data analyst, said levels have fluctuated since the beginning of the month before ultimately falling to a current range of around 1.1 Mt to 1.3 Mt. Costerousse told NGI that most vessels storing LNG offshore have been tracked around the northern coasts of the Antwerp-Rotterdam-Amsterdam region and the Mediterranean Sea.

“This may be due to restricted slot availability for an immediate discharge at European regas terminals, and some traders possibly waiting for gas prices to increase further in order to sell the cargo at the best possible price,” Costerousse said.

European Union (EU) regasification terminal storage utilization was at around 65% Monday, according to data collected by NGI. The utilization rate at some of the largest terminals in EU member countries climbed higher as well. The Gate terminal in the Netherlands reached almost 63%, while Spanish terminals in Barcelona and Caragena were above 90%. Utilization at Belgium’s Zeebrugge terminal dropped slightly to around 55%.

Vessels have also been tracked storing LNG in Asia and Central America. Singapore began storing LNG on ships near its only import terminal earlier in the month to secure supply levels, according to Bloomberg.

Traders and utilities typically avoid storing LNG at sea unless necessary, as natural gas can evaporate over time. Gas loss during transit is usually referred to as boil-off.

Costerousse said the increased use of LNG vessels as storage also would have a cumulative impact on charter rates, as they  continue to climb ahead of winter in an already tight market.

Analysts with shipbroker Fearnleys AS wrote vessel availability has been scarce for some time because of the draw of cargoes to Europe. Spot charter rates were “climbing exponentially” above typical September levels.

Flex LNG CEO Oystein Kalleklev said on LinkedIn Wednesday that he has “seen higher rates before, but this is the first time I have seen rates jumping $70,000 in one week surpassing $200,000 already in September.” Out of shipowner Flex’s 13 vessels, Kalleklev said only one is not on a long-term charter and is available for spot rates.

Fearnleys noted the timing of the latest price surge could be an early sign of an “anticipated shortage of shipping capacities for the upcoming winter.” Prices could also continue rising to “record-breaking levels,” even with below average winter vessel traffic “without a seismic change in the LNG market.”