Natural gas futures were trading higher following the release of government storage figures on the low side of what the market was expecting. 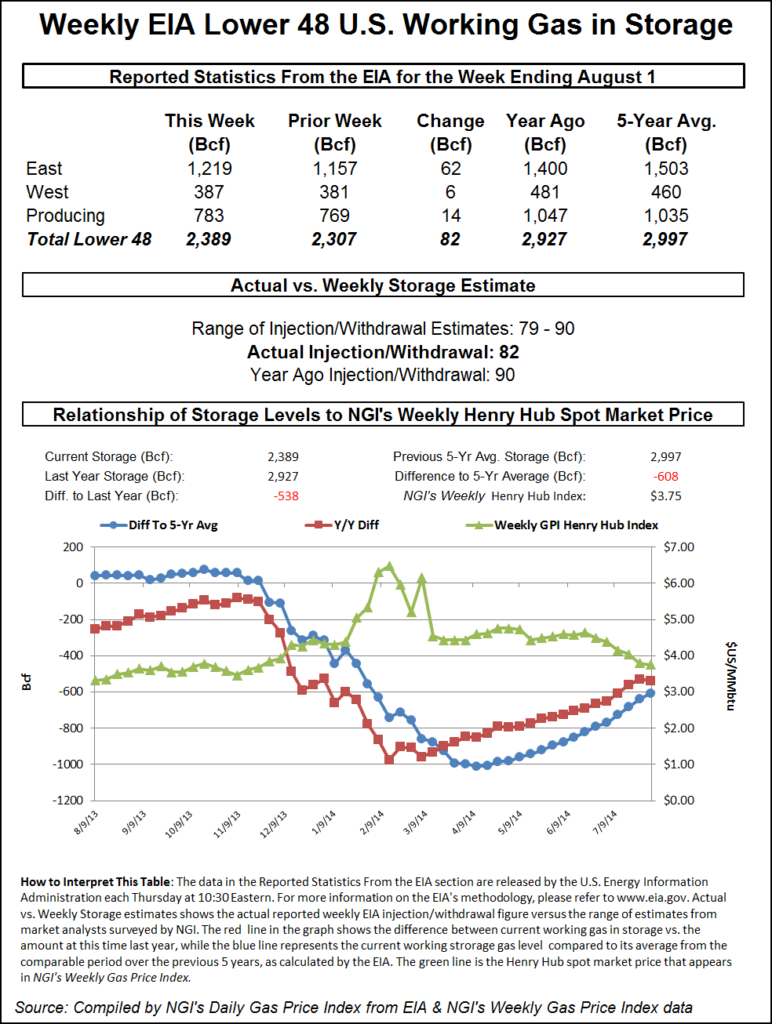 The injection of 82 Bcf was about 2 Bcf lower than market surveys and independent analyst projections, and for the week ended Aug. 1, the Energy Information Administration (EIA) reported an increase of 82 Bcf in its 10:30 a.m. EDT release. September futures fell to $3.952 from an earlier high after the number was released and by 10:45 a.m. September was holding $3.953, up 2.0 cents from Wednesday’s settlement. The session’s high of $3.981 and low of $3.922 were in place before the number’s release.

“The number didn’t affect any of the ranges at all. The market just rattled around,” said a New York floor trader. “Traders are looking for a reason to push the market higher, but is there any reason to do so? I don’t think so.”

Tim Evans of Citi Futures Perspective sees the 82 Bcf figure as “helping to sustain what has been improving market sentiment. We note it is still well above the 50 Bcf five-year average, and so still bearish on a seasonally adjusted basis. That said, it does also indicate some modest tightening of the supply-demand balance relative to the weather for the period, which could also translate into lower injections in the weeks ahead. We still anticipate above average builds, but by a smaller margin.”

Inventories now stand at 2,927 Bcf and are 538 Bcf less than last year and 608 Bcf below the five-year average. In the East Region, 62 Bcf was injected and the West Region saw inventories up by 6 Bcf. Inventories in the Producing Region rose by 14 Bcf.

The Producing region salt cavern storage figure increased by 2 Bcf from the previous week to 212 Bcf, while the non-salt cavern figure rose by 11 Bcf to 570 Bcf.