An escalating trade war between the United States and China threatens to jeopardize access to one of the largest markets for liquefied natural gas (LNG) exports and could delay final investment decisions (FID) on the next wave of U.S. LNG export terminals, according to an analysis by Morningstar Commodities Research. 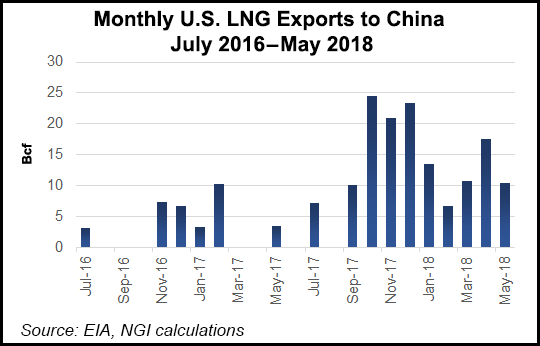 With U.S. LNG accounting for around 5% of China’s gas imports, China “represents one of the most promising destinations for U.S. natural gas,” analyst Matthew Hong said in a research note. “The fact that Chinese demand for natural gas is set to grow at a time when U.S. export capacity is expanding rapidly highlights the potential for deeper economic ties between the two countries. The current trade tensions make this difficult if neither side intends to de-escalate them.”

China, which sources its gas from a combination of domestic production and pipeline and LNG imports, increased its overall reliance on LNG in 2017 after experiencing shortages last winter. China has 20 LNG import terminals along its eastern coastline, representing about 8 Bcf/d of capacity, according to Hong.

“In past years, capacity utilization at these facilities remained low. This past winter, however, utilization skyrocketed on colder temperatures in the north, leading to higher utilizations in the northern and central coastal regions,” Hong said.

“Along with growth in natural gas demand, China’s LNG import capacity is expected to grow to 11.2 Bcf/d by 2021…As China’s demand for natural gas increases, LNG will play an increasingly important role in meeting the country’s needs.”

China has also been a key taker of burgeoning U.S. LNG exports, serving as the third-largest importer of U.S. LNG in 2017 at around 283 MMcf/d, or about 15% of total domestic LNG exports, according to Hong, citing data from the U.S. Department of Energy.

The International Energy Agency (IEA) has said it expects China to become the world’s largest natural gas importer over the next two to three years. Chinese gas demand is forecast to grow by 60% between 2017-2023, underpinned by policies aimed at reducing local air pollution by switching from coal to gas. China alone accounts for 37% of the growth in global demand in the next five years and becomes the largest natural gas importer by 2019, overtaking Japan, according to IEA.

Earlier this month, China was preparing to impose a 25% tariff on $16 billion worth of domestic imports, though not on crude oil or LNG, in response to the Trump administration’s unveiling of plans for a similar tariff on a range of Chinese goods. The Trump administration has accused China of engaging in unfair trade practices and has been announcing tariffs increasingly broad in scope since earlier this year.

“In an ever-escalating trade war between the world’s two largest economies, no product is immune from potential tariffs. If China imposes a 25% import tariff on U.S. LNG, its appetite for LNG is unlikely to change, but the impact on U.S. producers and exporters will be more direct,” Hong said. “This threat comes at a time when the Trump administration has stated its commitment to prioritize and fast-track the government approval process for fossil-related projects including LNG export terminals.”

FERC Chairman Kevin McIntyre told a Senate panel in June that he intended to hire more staff to address a backlog of permitting for LNG export infrastructure.

As an example to illustrate the potential headaches an escalating trade war would create for U.S. LNG players, Hong pointed to the 25-year commitment Cheniere Energy Inc. secured from China National Petroleum Corp. (CNPC) that helped lead to an FID for a third train at its Corpus Christi terminal in South Texas.

“Several other approved LNG terminal projects” awaiting FID “require long-term contracts similar to those signed between Cheniere and CNPC,” Hong said. “A more aggressive stance on trade increases the risk that these projects will see delays. In a direct response to the trade conflict, PetroChina has said it may temporarily halt purchases of spot U.S. LNG, which means competitor supplier countries are likely to benefit.”

In the near-term, the U.S. cargoes headed to China could decrease or stop as the extra cost from a 25% tariff makes Australian, Qatari and Southeast Asian sellers more competitive.

“Chinese buyers with agreements in place to purchase U.S. LNG may swap their contracts with other counterparties to avoid paying additional fees or outright cancel them,” Hong said. “In these circumstances, U.S. natural gas destined for the international market could find its way back into the domestic pipeline system, adding to an already oversupplied market.”

In the long term, “a prolonged disagreement could delay the second wave of U.S. LNG projects” from reaching FID. “Each of these projects requires some level of base contracting, and this is especially true for projects that depend heavily on third-party financing,” the analyst said. “While a delay by itself would not kill a specific project, it could prevent developers contracting with potential shippers during the early stages of what is expected to be a bull market for LNG over the next two years.”

RBN Energy LLC has been tracking the next round of U.S. liquefaction/LNG export projects and recently estimated that currently operating facilities and those with FIDs in hand and under construction could eventually account for 9.4 Bcf/d of U.S. LNG sendout.

That’s “more than one-ninth of total U.S. gas production today, not even accounting for the usual 10% losses in the liquefaction process,” RBN analyst Housley Carr said. “And that’s just the beginning. At least another doze and a half liquefaction/LNG export projects are in various stages of pre-FID, pre-construction development.”

Based on NGI’s analysis of FERC filings and company documents, total LNG sendout capacity is on track to rise to 3.3 Bcf/d (3.6 Bcf/d assumed intake) by the fourth quarter before surging to 8.2 Bcf/d (9.0 Bcf/d assumed intake) by 4Q2019. The additional capacity is expected to come from trains starting up at Elba Island, Cameron LNG, Freeport LNG and Corpus Christi, as well as a fifth train at Sabine Pass.

Opinions have been mixed on the impact of China’s tariffs on U.S. LNG, though trade associations representing the domestic LNG industry have urged the Trump administration to quickly resolve the escalating trade dispute with China.

“This move by the Chinese to add LNG to the list of possible retaliatory tariffs is an unwelcome but not wholly unexpected development,” said LNG Allies CEO Fred Hutchison earlier this month. “It is imperative that the United States and China begin serious, high-level negotiations to resolve the complicated issues –which, by the way, are wholly unrelated to energy — that lie beneath the current tariff dispute.”

Meanwhile, pipeline and oilfield services players have also voiced displeasure with the Trump administration’s use of tariffs, specifically on steel.