LNG and renewables are the core of TotalEnergies SE’s U.S. strategy as it inks alliances to expand the global trading arm, executives said Wednesday. 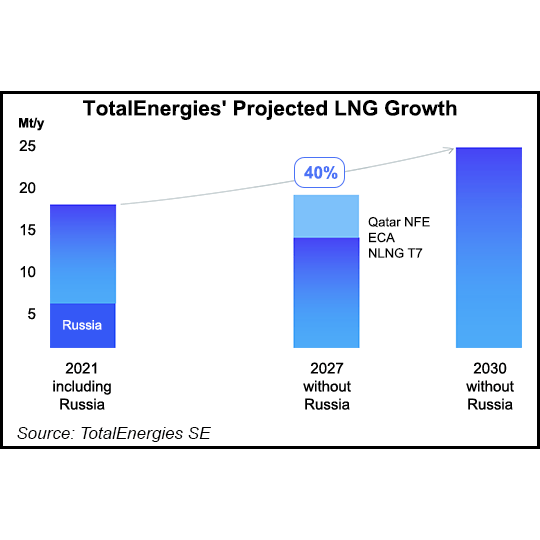 The French supermajor is “profitably expanding,” with liquefied natural gas equity production in the United States and Mexico, said CFO Jean-Pierre Sbraire. He and CEO Patrick Pouyanné shared the stage in New York City during a two-day show to present detailed strategies and the global energy outlook.

There were questions from analysts about Western Europe, which is facing down a potentially dire winter as Russian natural gas supply dwindles.

The Paris-based operator late last month agreed to sell its 49% interest in a Siberian natural gas field to Russian partner PAO Novatek, joining its peers in casting off Russian assets. Pouyanné was asked about what may happen longer term, when rapprochement may be reached between Europe and Russia. What may happen as the stranded Russian gas begins to work its way back into Europe?

“That’s a political question,” Pouyanné said. “In my view, if we have to exist in this world and find peace on the continent again, gas will have to be a part of it, but not as it was before…I would not be surprised to see 50 Bcm to flow” possible through a pipeline. “If we are optimistic, and I’m not today, I don’t see any” sign of Russia backing down, the CEO said. “It’s quite frightening…The gas business will come back, but not at the same volume.”

To that end, TotalEnergies is building out its gas business elsewhere, and in particular, in North America.

‘We Will Need Gas For A Long Time’

“On LNG and all that…we will need gas for a long time,” Pouyanné said. There is “no way” to achieve a net-zero carbon system without combining natural gas with renewables at the beginning to work toward zero emissions.

“It’s just a fact,” he said of natural gas. Some people “would like to get rid of it, but it will take a long time to do that…I think this is where companies like ours must have a longer view. My view on LNG markets is, therefore, we continue to grow over the long term.

“It might be different in Europe,” and the “demand factor could disappear in the long term.” The CEO said a big worry is the impact of high gas prices for European industry. “We will see some destruction…Clearly, Russian gas was a social complement, not for us, but for industry. This will disappear.”

The United States is expected to be a major growth engine for gas and for renewables.

“The United States is a perfect illustration of our strategy in action,” Sbraire told analysts. “The U.S. is positioned to play a dominant role in the coming years in the future growth in the LNG industry.

“With that in mind, we began building our LNG business here in the U.S. about 10 years ago, mainly through counter-cyclical acquisitions…”

Sempra, which is advancing LNG export projects on the Gulf Coast and in Mexico, has become a key partner, Sbraire noted. Earlier this year Sempra secured a heads of agreement with TotalEnergies, Mitsui & Co. and Japan LNG Investment LLC to develop a fourth liquefaction train at the Cameron LNG project in Hackberry, LA. TotalEnergies in August also secured one-third ownership in Sempra’s Vista Pacifico LNG terminal in Mexico.

The French supermajor today is the “leading offtaker and exporter of the U.S. LNG,” Sbraire said. “And by integrating our leading position into our global LNG portfolio, we have a competitive advantage in the U.S. to Europe trades.”

Sbraire said the United States “is becoming a major pool of activities for the company in the coming years.”

The first focus is LNG growth, which “predates the current situation in Europe by more than a decade…The most significant step was the 2018 contracts and acquisitions…which led to our entry in the three first trains of Cameron LNG projects.” The “icing on the cake” was taking over a long-term offtake from Freeport LNG in 2019.”

TotalEnergies has been able to “profitably leverage this position through our global trading network to supply LNG in Europe at competitive price,” Sbraire noted. The future developments with Sempra offer to bring even more supply in the years ahead.

The second pillar of U.S. growth is through renewables. Over the past 18 months, TotalEnergies has taken “major positions in solar and wind, both onshore and offshore, and in storage,” setting the company up to become one of the top renewable power developers in the United States.

The goal is to develop 25 GW gross of renewable power generation by 2030 in the United States.

“That means that the U.S. will significantly contribute to the company’s objective of having 100 GW of power generation by 2030,” Sbraire noted.

The Gulf of Mexico and the Gulf Coast also are key to the domestic strategy, with ongoing deepwater projects, along with refinery and petrochemicals expansions. In addition, TotalEnergies is working in the gassy Barnett Shale in Texas that could supply more LNG for export.

“The U.S. has provided us with ample opportunities” in the upstream and downstream, Sbraire said. “And we will continue leveraging LNG and renewables to rebalance our global portfolio toward the U.S.”