Global oil demand should plateau earlier than estimated, likely before 2030, but natural gas will continue to play a key role in the energy transition, TotalEnergies said Monday. 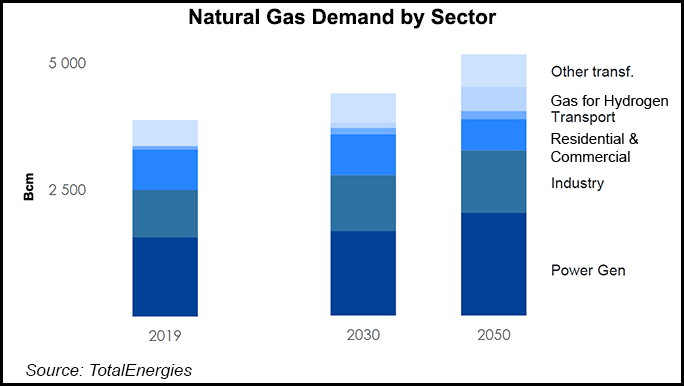 The Paris-based multi-energy major provided its third annual short-term forecast in the Energy Outlook (EO) 2021. Ahead of the upcoming United Nations (UN) Climate Change Conference, also known as COP26, the Energy Landscape report details the global pace of the transition toward net-zero carbon.

“Energy transition is a global debate, and there is consequently a necessity for society as a whole to participate,” CEO Patrick Pouyanné said. The two documents are “in line with our strategy to build a multi-energy company” as it moves toward net zero carbon by 2050.

Sustainability is “at the core of our strategy,” he said.

“I don’t have all the answers,” Pouyanné said during the question-and-answer session following the presentation. TotalEnergies will achieve net-zero carbon dioxide (CO2) emissions by 2050. “But we will not solve it alone…Energy producers…have to solve it together, with society and policymakers and of course, the citizens…”

Today 80% of the planet is using fossil fuels, he noted. “That’s the reality of the planet. It was true in 2010 and it’s still true in 2021…The important word is transition. Transition means finding the right way to accommodate the present and the future.”

Everyone has to get on board with the idea that the planet is warming, he said. “Inertia is not possible.”

Asked about the rising prices for oil and natural gas, the CEO blamed some of it on the Covid-19 pandemic. “Suddenly we had diminished investment last year and it was very uncertain so there were less investments.”

Now there is “a lot of demand, which by the way, is that bad? I mean, this increase of natural gas is coming from Asia and from China fundamentally. Why? Because there are policies which incentivize some energy consumers to use natural gas rather than coal.

“So fundamentally, it’s coming also from a policy to control CO2 emissions…The Chinese government…is taking action. And so you have more demand for natural gas,” including for liquefied natural gas (LNG).

TotalEnergies benefited from a rebound in commodity prices during the second quarter. The integrated gas, renewables and power segment saw LNG sales up 8.5% year/year and 1% sequentially to 10.5 million tons. Average LNG prices were up 50% from a year earlier to $6.60/MMBtu.

Ramping up production growth to make up for the shortfall in demand and investment last year “cannot be absorbed easily if you don’t continue to invest,” Pouyanné noted. “So the lesson is that we need to monitor” the overhaul of the global energy markets to ensure the transition is smooth.

The energy transition requires “investing more and more in a new way,” the CEO said. Energy needs to be decarbonized, “but at the same time we need to maintain a certain level of investment in the energy that we are using today…”

The EO 2021 dives much deeper into reexamining TotalEnergies’ core forecasts on the energy transition to 2050. The Momentum and Rupture scenarios, which take into account the current market and societal trends, both see oil plateauing before 2030 and “declining thereafter.”

Natural gas continues to play a role in both scenarios as a transition fuel, particularly when accompanied by carbon capture and methane emissions control solutions, throughout the projected time frame covered by Momentum and Rupture.

The EO researchers noted that “energy efficiency is the key lever shared by all countries and one of a low-hanging fruit.” The Momentum scenario takes into account an ambitious path in efficiencies, which is similar to last year’s EO.

“Energy demand grows in Momentum and Rupture, along with the growth of both world population and global economic development,” TotalEnergies noted.  “In the meantime, emissions are down in both scenarios, particularly in Momentum, compared to the 2020 outlook with new energy carriers such as electricity in transportation and hydrogen allowing for deeper decarbonization of all sectors.”

The ban on sales of new internal combustion vehicles from 2035 has been applied in the Momentum scenario for the countries that have made a net-zero 2050 pledge.

“This hypothesis has for consequence a massive electrification of light vehicles and an increased penetration of hydrogen or of hydrogen-based fuels — such as e-fuels — and of biofuels in other modes of transport,” researchers said.

“The end-use demand is met with massive electrification, yielding an increased demand for renewable-based electricity, solar and wind, which considerably increased compared to last year’s outlook.”

Incorporating the new net-zero pledges into this year’s Momentum scenario, and “equivalent pledges to all countries” in the Rupture scenario underscore “the importance of a fair transition: one that addresses the challenge of ‘more energy, less emissions’ without penalizing growth and improved living standards in developing countries.”

While the EO attempts “to address the need for energy to decarbonize,” energy also has to remain globally accessible.”

In the Momentum scenario, natural gas continues to play a big role, with “large-scale use of natural gas as a transition fuel, especially in power and industry.”

In addition, it foresees a continued revolution in transport options, with electrification of light vehicles, and increased adoption of hydrogen, hydrogen-based fuels and bioenergies in other transport segments, researchers noted.

“Broad end-use electrification” is rising in the Momentum scenario too, with increased renewables consumption, particularly for solar and wind generation. China’s emissions also are seen peaking by the mid 2020s, with an estimated 60% decarbonization overall by 2050.

The big challenge is “reconciling growing energy demand with decarbonization and broader sustainability goals,” according to TotalEnergies. The Momentum scenario sees the world population growing to around 10 billion people by 2050, or two billion more than today, mostly in developing nations.

The Rupture scenario, meanwhile, offers a “back-casting approach,” with the goals of the UN climate accord, also known as the Paris Agreement, achieved. Global temperature increases are limited to 1.7 degrees C, below the UN target of 2 degrees C.

The Rupture scenario assumes “strong shifts” by countries that have not yet set 2050 net-zero goals. It also forecasts “large-scale clean tech advancements,” with a “new energy system” rebuilt on a global scale.

More nations join the net-zero pact in the Rupture scenario. In addition, the energy transition levers are amplified, with improved energy efficiencies and further development of electricity and renewables. There also is a “higher penetration of new energy carriers,” such as hydrogen in industry and transport, along with biofuels options.

In the Rupture scenario, the evolution of energy demand per capita over the next 30 years “is critical” for developing nations.

“Without these countries, the global net-zero goal cannot be achieved.”