TotalEnergies SE plans to halt all purchases of Russian oil and petroleum products by the end of this year at the latest, but it would continue supplying Europe with Russian natural gas through its minority stakes in five Russian companies. 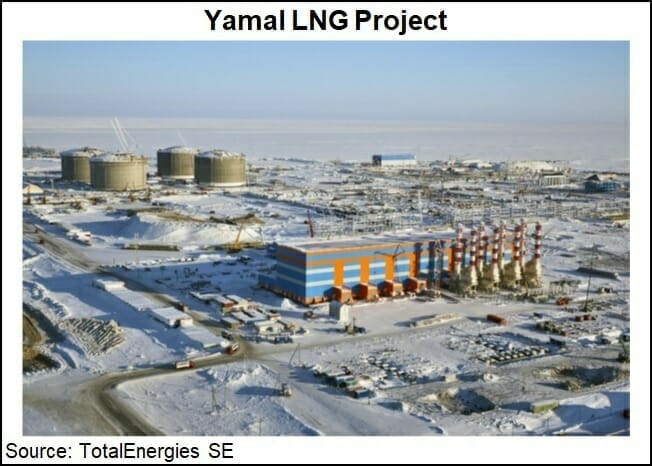 “TotalEnergies is a European energy company that must contribute to the supply security of the European continent, which does not have the same domestic resources as other western countries such as the United Kingdom or the United States,” representatives of the French integrated energy major said Tuesday.

“In accordance with the European Union’s decisions to maintain at this stage Russian gas supplies,” TotalEnergies said it would continue to supply Europe with liquefied natural gas (LNG) “from the Yamal LNG plant within the framework of long-term contracts that it must honor as Europe’s governments consider that Russian gas is necessary.

“Contrary to oil, it is apparent that Europe’s gas logistics capacities make it difficult to refrain from importing Russian gas in the next two to three years without impacting the continent’s energy supply.”

The comments follow a 10-point plan to reduce the European Union’s dependence on Russian gas supplies by one-third over the next year.

On the oil front, however, “given the worsening situation in Ukraine and the existence of alternative sources for supplying Europe, TotalEnergies has unilaterally decided to no longer enter into or renew contracts to purchase Russian oil and petroleum products, in order to halt all its purchases of Russian oil and petroleum products as soon as possible and by the end of 2022 at the latest,” the company said.

It added, “TotalEnergies already announced that it halted all spot market trading since February 25, 2022, on Russian oil and petroleum products. This is also the case for spot trading transactions concerning Russian natural gas or liquefied natural gas.”

The company explained that it has term contracts to purchase Russian oil and petroleum products that end, “at the very latest, on Dec. 31, 2022. These term contracts primarily cover supplies for the Leuna refinery in eastern Germany, which is served by the Druzhba pipeline from Russia.

The company added, “In close cooperation with the German government, TotalEnergies will terminate its Russian oil supply contracts for the Leuna refinery as soon as possible and by the end of 2022 at the latest, and will put in place alternative solutions by importing oil via Poland. Already, a first contract will not be renewed at the end of March 2022.”

What are TotalEnergies’ Interests in Russia?

TotalEnergies said it does not plan to divest from any of these companies, saying that doing so would undermine the purpose of sanctions.

“The current environment of European sanctions and Russian laws controlling foreign investments in Russia would prevent TotalEnergies [from finding] a non-Russian buyer for its minority interests in Russia. Abandoning these interests without consideration would enrich Russian investors, in contradiction with the sanctions’ purpose,” the company said. “In addition, abandoning these minority interests held by TotalEnergies would have no impact on the companies’ operations and revenues, since these companies have their own employees and are managed autonomously.”

The project’s three liquefaction trains are slated to enter service between 2023 and 2026.

TotalEnergies expressed “its firmest condemnation of Russia’s military aggression against Ukraine, which has tragic consequences for the Ukrainian population and threatens peace in Europe.”

The company pledged to ensure “strict compliance with current and future European sanctions, no matter what the consequences on the management of its assets in Russia, and gradually suspend its activities in Russia, while assuring its workforce’s safety.”

TotalEnergies does not currently operate any oil and gas fields or LNG plants in Russia.