TotalEnergies SE benefited from a rebound in commodity prices in the second quarter as earnings came in above pre-Covid 19 levels during the same period in 2019. 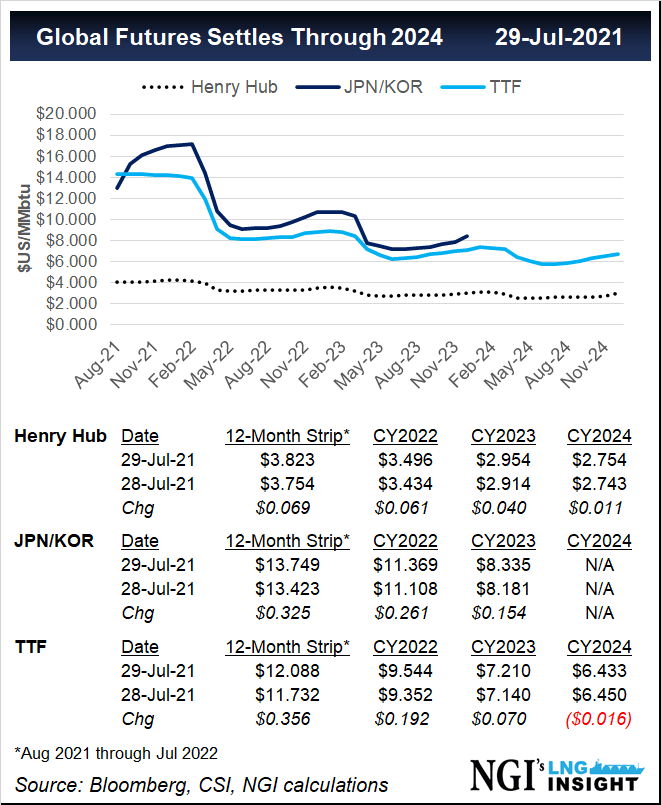 The integrated gas, renewables and power segment also continued to grow. Liquefied natural gas (LNG) sales were 10.5 million tons in the second quarter, up 8.5% from the year-ago period and a 1% gain from the first quarter.

Average LNG prices were up 50% year/year in the second quarter to $6.60/MMBtu. Prices were lifted by the lag effect of rising crude prices on long-term oil-linked LNG contracts, as well as  the increase in gas prices for spot LNG contracts. Oil-indexed LNG contracts are typically sold based on an average crude price over the previous three to six months.

Through the first six months of 2021, TotalEnergies said its average realized price for Brent crude was $65/bbl, up from $40.10 during the same time in 2021.

The major global portfolio player has stakes across the LNG value chain including production, regasification and storage. While sales were up, the company said second quarter LNG production decreased 3% year/year following a fire that shut down Hammerfest LNG in Norway last year. There also was planned maintenance during the period at Ichthys LNG in Australia.

Growth in renewables and electricity also continued in the quarter as the company commissioned more than 500 MW gross of renewable power generation. It also acquired a 23% stake in a 640 MW offshore wind project under construction in Taiwan.

Second quarter electricity sales increased by 35% year/year, while gas sales were up by 19% over the same time. Second quarter utility sales are usually lower given the time of year, but the increase followed a growing number of customers, particularly in France. There, the company now has more than five million customers.

Also on Thursday TotalEnergies also announced a partnership to supply 474 MW of renewable electricity to Amazon data centers in Europe and the United States. Amazon would help accelerate the energy major in its digital transformation.

TotalEnergies produced 2.7 million boe/d in the second quarter, down 3% from the year-ago period because of natural field declines and maintenance shutdowns.

The company reported second quarter net income of $2.3 billion (80 cents/share), compared with a steep net loss of $8.4 billion (minus $3.27) in 2Q2020, when commodity prices declined and the global economy retracted amid the pandemic.