Total SA is strengthening its hand in Europe and folding in more demand for its robust liquefied natural gas (LNG) assets in a deal to acquire 2.5 million customer contracts in Spain from utility Energias de Portugal (EDP). 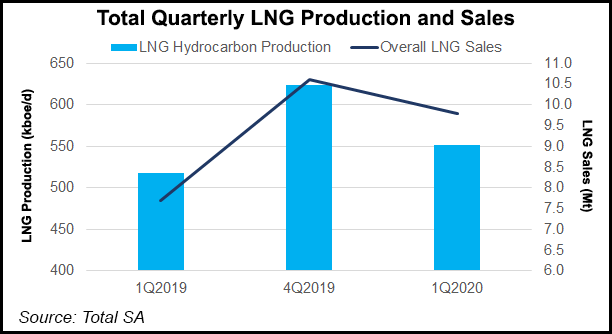 “This transaction enables Total to become one of the key players in the energy market in Spain, covering a wide spectrum from LNG imports to power generation from renewables and gas, as well as gas and electricity supply,” said CEO Patrick Pouyanne. “Our ambition is to be able to bring a competitive offer from our productions to the Spanish consumers…”

The deal also includes two gas-fired combined-cycle power plants with generation capacity of nearly 850 MW. The acquisition, based on an EDP enterprise value of 515 million euros, or about $473 million, comes after Total entered Spain’s solar market earlier in the year and more recently announced an ambitious plan to achieve net-zero emissions by 2050 across its operations.

Total said the acquisition also “complements its future production of renewable electricity, which is intermittent, with flexible electricity generation capacities from gas.”

The French supermajor’s Integrated Gas, Renewables and Power segment is becoming increasingly important to overall results, with LNG at the forefront. The company is a major global portfolio player, with stakes across the value chain including production, regasification and storage. LNG sales were up 30% year/year in 1Q2020 at 9.8 million tons during a period that otherwise squeezed many facets of its operations when the Covid-19 pandemic took a toll on energy markets.

The company has considerable LNG holdings in the United States alone, with equity production and long-term supply stakes in the Cameron, Cove Point, Freeport and Sabine Pass export terminals that are in operation in Maryland and on the Gulf Coast. Total also has stakes in the proposed Driftwood LNG terminal in Louisiana and the Energia Costa Azul project in Mexico.

With the acquisition of EDP’s customers in Spain, Total would become the country’s fourth largest supplier by market share of gas at 12% and power at 6%. Spain is Europe’s seventh largest gas consumer, with demand of 31.5 billion cubic meters in 2018, according to BP plc’s latest Statistical Review of World Energy.

In all, the EDP acquisition would boost Total’s gas power customers in Europe to 8.5 million by next year and put it on track to reach its target of more than 10 million customers by 2025.

The deal is still subject to certain conditions, and upon closing Total said 280 EDP employees would join its ranks to manage the assets in Spain.