A considerable jump in global oil and natural gas prices during the first quarter supported a big gain in profits for French supermajor Total SE. 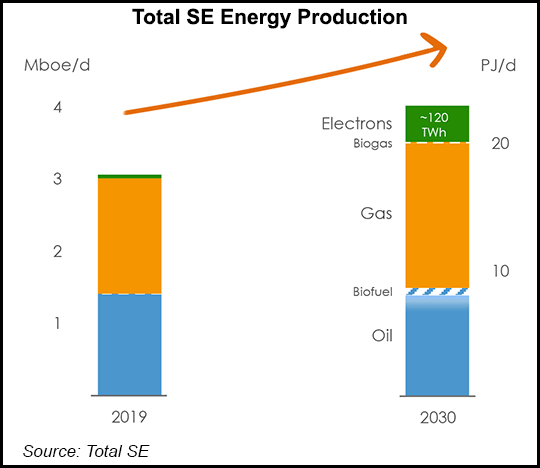 Commodity prices were strong during the period as the world continued recovering from Covid-19, while colder weather in the northern hemisphere helped drive natural gas demand. Total said average oil prices during the first quarter increased 38% sequentially to $61.10/bbl, while natural gas prices were up by 24% to an average of $4.06/MMBtu.

Total also continued to boost its power business during the period as it leans on both renewable electricity and liquefied natural gas (LNG) to drive growth over the next decade.

First quarter LNG sales remained strong at 9.9 million tons (Mt), flat from 9.8 Mt in the year-ago period and from 10 Mt in 4Q2020. Volumes were steady despite a fire last September at Equinor ASA’s Hammerfest LNG export terminal in Norway that knocked the plant offline. Total holds an 18.4% share in the facility.

Average LNG prices, Total said, came in at $6.08/MMBtu in the first quarter, down from $6.32 in the year-ago period, but well above the $4.90 average in 4Q2020. LNG prices soared during 1Q2021, particularly in Asia, amid historic cold and a lack of global supplies caused by unplanned outages at terminals worldwide.

CFO Jean-Pierre Sbraire said the recent rise in oil prices is also likely to benefit LNG operations in the coming months. Oil-indexed LNG supply contracts are typically sold based on an average crude price over the previous three to six months.

Sbraire also added during an earnings call Thursday that the company’s Mozambique LNG project is likely to be delayed for a year after work was suspended amid rising violence in the region. The company will instead focus on an expansion project at Cameron LNG in Louisiana, which would add another two trains, and the 5.4 million metric tons/year Papua New Guinea LNG project.

Like its energy major peers, Total has focused heavily on the energy transition, and it reported strong growth in those efforts during the first quarter. CEO Patrick Pouyanné said over the last year, installed renewable power generation capacity grew to 7.8 GW from 3 GW. Net electricity production also increased 61% year/year in the first quarter to 4.7 TWh as renewable resources have doubled and the company acquired four gas-fired power plants in France and Spain late last year.

Overall, year/year sales of electricity and natural gas in the first quarter increased by 13% and 8%, respectively, as the company added more customers.

Meanwhile, oil and natural gas production continued to decline during the quarter, coming in at 2.8 million boe/d from 3 million boe/d in the year-ago period. The decline was driven by production quotas implemented by the Organization of the Petroleum Exporting Countries and its allies from Total’s assets in Kazakhstan, Nigeria and the United Arab Emirates. Asset sales, unplanned maintenance and natural field declines also contributed to lower hydrocarbon production, management said.

Total reported first quarter net income of $3.3 billion ($1.24/share), compared with net income of $34 million (1 cent) in the year-ago period, when commodity prices fell 30% across the board amid a crisis in the oil markets and demand destruction caused by the pandemic.

Williams on Wednesday hit the green light for the Louisiana Energy Gateway (LEG), a 1.8 Bcf/d natural gas system designed to move Haynesville Shale supply to industrial markets and for export overseas. The LEG system, set for service by late 2024, would deliver Haynesville gas to industrial corridors and to liquefied natural gas (LNG) export…