Total SE said this week that an affiliate has completed the largest marine refueling with liquefied natural gas (LNG) ever to take place. 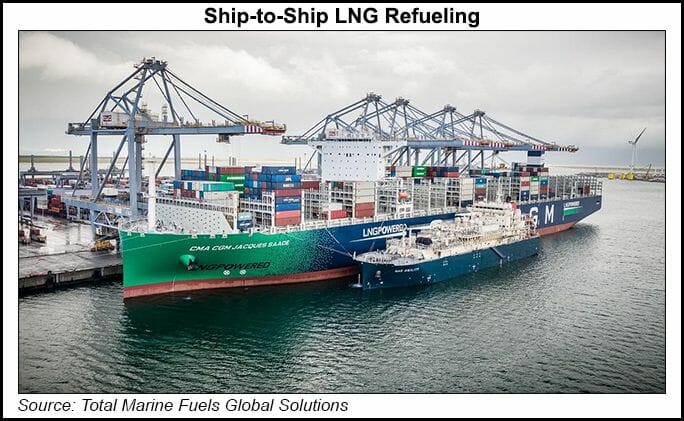 The company said it filled the CMA CGM Jacques Saadé, a large containership, with 17,300 cubic meters of LNG at the Port of Rotterdam in the Netherlands last week, making it the largest operation of its kind in history. Total Marine Fuels Global Solutions (TMFGS), which is dedicated entirely to bunkering, refueled the Jacques Saadé in a ship-to-ship transfer while the containership carried out cargo operations.

The LNG delivered by TMFGS’s bunkering vessel, the Gas Agility, also included 13% biomethane that was produced from municipal waste in the Netherlands. Total’s Jérôme Leprince-Ringuet, vice president of marine fuels, said the refueling operation was the result of a three-year collaboration between the French companies. “It also marks the shipping industry’s first commercial use of biomethane on this scale,” he added.

CMA CGM operates more than 500 ships that serve over 420 ports on five continents. The company selected Total to supply it with natural gas.

Total is a major LNG player, with a portfolio that includes liquefaction capacity, marketing, trading, shipping and downstream infrastructure. But it has also pushed to further integrate marine fuel into the heart of its LNG strategy.

Global LNG demand for ship propulsion is projected to increase. International regulators have tightened emissions standards, and the maritime industry has increasingly turned to LNG as a fuel source because of its lower emissions profile and cost competitiveness.

The International Maritime Organization has established the goal of reducing greenhouse gas emissions from shipping by at least 50% by 2050 compared to 2008, and many LNG-fueled ships are expected to be produced going forward. An LNG-powered vessel emits up to 20% less carbon than conventional fuel-powered systems, according to Total.

Growth in the space has been particularly strong in Asia and Europe, with projects increasingly being announced in North America, as well.