A dozen of the world’s largest oil and natural gas producers, whose goal when they came together was to cut emissions from their upstream businesses, have increased the targets for methane and carbon to 2025. 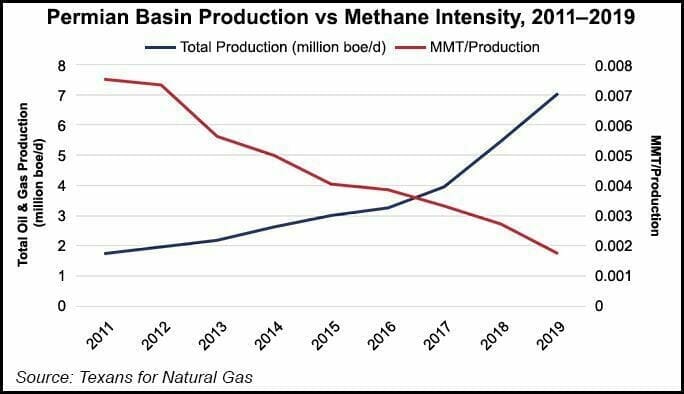 The CEO-led Oil and Gas Climate Initiative (OGCI), launched in 2014, said Tuesday it has set more stringent targets to reduce the carbon and methane intensity from their operated assets around the globe in the next four years.

The companies combined account for nearly 30% of global operated oil and natural gas production. The OGCI, a voluntary effort, was formed to leverage members’ “collective strength” to meet the challenges set by the United Nations global climate accord in 2015 to reduce the impacts of climate change.

The original 2025 target was to reduce the 2017 carbon intensity level to 20 kg within four years. However, overall levels fell last year to 19.5 kg, OGCI noted.

The average methane intensity of aggregate upstream operations also has been revised.

The revised targets are expected to lead to an additional reduction of around 50 million tons of carbon dioxide equivalent/year, the OGCI said.

Producers are looking to further “drive deep reductions” in GHG. All of the companies share a goal to achieve net-zero emissions from the operations under their control, i.e. Scope 1 emissions. They also plan to “leverage their influence” to cut carbon emissions to zero for nonoperated assets, better known as Scope 2 emissions.

​​Cutting direct and indirect emissions has become standard protocol for many oil and gas operators.

Members, who work collectively and through individual company efforts, want to “expand the pace and scope of our transitions to a low-carbon future…to achieve net zero emissions as early as possible.” They plan to accelerate their efforts by working “with partners, customers, policymakers and other industries to develop and deploy innovative and large-scale low-carbon solutions.”