The states that are home to the most oil, natural gas and coal production have substantially increased their collective share of American energy output in the 21st century, concentrating production in a few key locations, according to the U.S. Energy Information Administration (EIA). 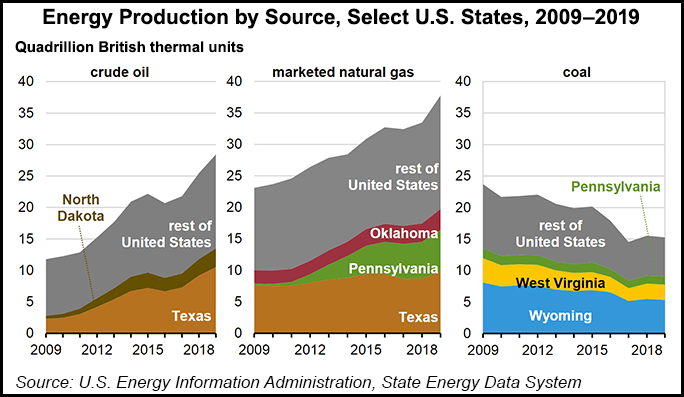 The six leading states — Texas, Pennsylvania, Wyoming, Oklahoma, West Virginia, and North Dakota — accounted for 55 quadrillion Btu (quads) of total energy output in 2019, the most recent year for which complete data was analyzed by EIA. That total was 55% of the primary energy produced in the country, up from 39% in 2000, the agency said.

The vast majority of primary energy in that span consisted of gas, oil and coal. Over the past decade, energy production in the United States grew 40%, driven largely by increased crude and natural gas production in Texas, Pennsylvania, Oklahoma and North Dakota, EIA data show.

“During that period, advances in hydraulic fracturing and horizontal drilling made drilling for previously inaccessible crude oil and natural gas more economical,” EIA researchers said in a report Tuesday. Between 2009 and 2019, “production of primary energy more than doubled in Texas and Oklahoma, more than tripled in Pennsylvania, and more than quadrupled in North Dakota.”

Texas, which has led the nation in both crude oil and natural gas production since 1988, accounted for 41% of domestic crude output in 2019, double its 2009 share. North Dakota, the second-largest oil-producing state in 2019, produced 12% of U.S. crude that year, a fourfold increase from 2009, EIA said.

Marketed production of natural gas swelled 76% in the United States between 2009 and 2019, the agency added. Texas, Pennsylvania and Oklahoma accounted for 53% of the nation’s natural gas production in 2019.

Meanwhile, the leading coal-producing states — Wyoming, West Virginia, and Pennsylvania – were collectively home to 57% of total production in 2009 and 59% in 2019, according to EIA.

U.S. coal production has steadily declined over the past decade alongside falling coal demand for electricity generation as the nation gradually shifts to more environmentally friendly sources of renewable energy.

Production of renewables, including wind, solar, and biofuels, grew 51% over the past decade, EIA said. Texas led all states and produced more than three times as much renewable energy in 2019 than in 2009, “driven by increases in biofuels energy production and electricity generation from wind,” researchers said.