Lower 48 oil and natural gas production is on the rise, particularly in the Permian Basin, but shortages of labor, materials and equipment will prevent a rapid supply response to current market tightness, according to experts. 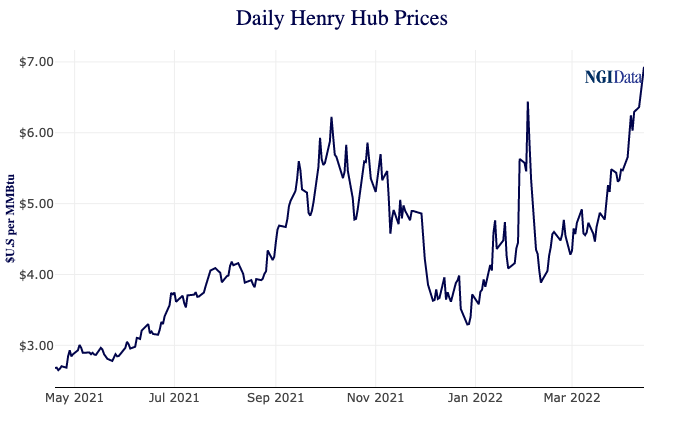 The Biden administration has called on U.S. producers to ramp up supply in order to lower gasoline prices and reduce global dependence on energy imports from Russia.

However, publicly traded and privately held producers alike will be hard pressed to achieve dramatic production increases over the near term, according to NGI’s Patrick Rau, director of strategy and research.

“Based on public guidance and Wall Street consensus estimates, we estimate that U.S. publics are going to grow natural gas production at about 3% this year,” Rau said on the latest episode of NGI’s Hub and Flow podcast. Their privately owned counterparts will “grow faster than that, and they are adding rigs at a faster pace. But we think there are simply too many constraints in place right now that will prevent both publics and privates from increasing production too quickly in 2022.”

The Energy Information Administration (EIA), for its part, is forecasting a 4% increase in U.S. dry gas output and a 7% increase in oil production in 2022 versus 2021.

One major constraint on supply is a lack of high-end, high-horsepower “super-spec” drilling rigs and qualified hydraulic fracturing crews, Rau said. “We note that there are a number of prominent oilfield service companies who are saying that capacity utilization for both those things right now is north of 90%, so there’s only so many extra rigs and crews folks could add even if they wanted to add more.”

Producers also can no longer rely on their inventory of drilled but uncompleted (DUC) wells, which have fallen dramatically. The DUC well count throughout the primary Lower 48 onshore basins stood at 4,273 as of March, down from 6,905 in March 2021, according to EIA.

Exploration and production (E&P) firms also have cited pressure from investors as a factor limiting production growth, as shareholders have demanded that a greater percentage of cash flow from operations be returned to them, rather than reinvested as capital expenditure. Lower 48 E&Ps have obliged, and as a result the energy sector has significantly outperformed the S&P 500 over the last year.

Lower 48 E&Ps including Pioneer Natural Resources Co. and Devon Energy Corp., meanwhile, have pledged to limit annual production growth to 5% or lower, regardless of the oil price.

However, the notion of investor pressure as the primary factor holding back production is “outdated a little bit,” Jeff Nichols, a partner at Haynes and Boone LLP, told NGI.* He said producers’ “current limitation is people and rigs and supplies. With the price of oil as high as it is, they’re currently doing everything they can to increase production.”

Nichols explained that “a lot of people left the industry during the downturn. You need people, you need engineers to supervise these drilling projects.”

Areas such as the Permian, the Eagle Ford Shale and the gas-rich Haynesville Shale are nonetheless seeing growth in drilling and production. The drilling rig counts in these three areas stood at 334, 60 and 67, respectively, as of Friday, according to the latest Baker Hughes Co. data. These numbers are up from 227, 33 and 45, respectively, a year ago.

Horizontal drilling permits for new wells in the Permian hit an all-time high in March, “driven by elevated oil prices and production demand,” according to Rystad Energy.

As activity in the Permian continues to ramp up, natural gas takeaway capacity is “the topic du jour,” Rau said. Like many analysts and E&Ps, he said new pipelines could be needed as soon as 2023. Any delays to building pipelines would increase the risk of weaker basis differentials for Waha natural gas prices in West Texas relative to Henry Hub, he said.

Privately held E&Ps are leading growth in the Permian, “but there are some prominent publics…increasing production there as well,” especially majors like Chevron Corp. and ExxonMobil.

On the mergers and acquisitions (M&A) front, Nichols noted that “over the past 12 months, there’s been a big story of assets moving from public to private hands. Our firm has been involved in several large deals where big packages of oil wells were transferred from the majors to small private companies that you’ve never heard of.”

That may be changing though, Nichols said, “because the capital markets are starting to open up [and] more investors are coming back to the space. So looking forward, we may look forward to more M&A deals where private companies sell asset packages to public companies and private companies go public themselves.”