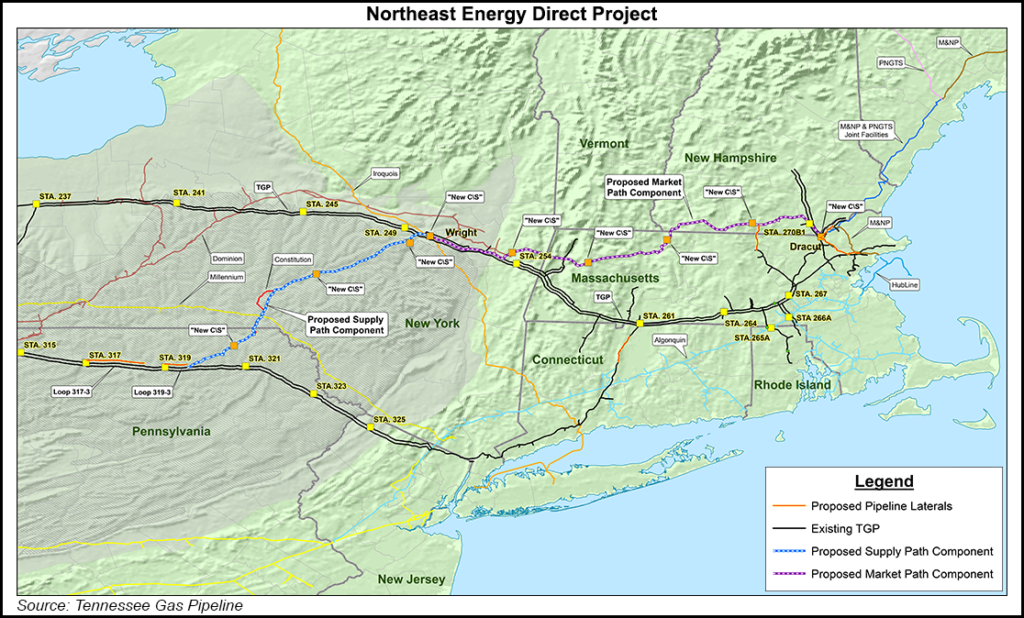 Last July, the KMI board gave the go-ahead for the project’s market path segment from Wright, NY, to Dracut, MA (see Daily GPI, July 16). The board had yet to approve the supply path portion of NED. A November filing at the Federal Energy Regulatory Commission was for the entire project and was made up of more than 240 files totaling more than 20,000 pages (see Daily GPI, Nov. 20, 2015).

At the time of the NED market path approval, $3.3 billion was allocated to the project and it was placed in KMI’s project backlog. The supply path had not been approved for funding and was not in the backlog.

“We worked very hard to get customer commitments on the project,” KMI CEO Steven Kean told analysts during an earnings conference call Wednesday afternoon. “And while many of our LDC customers did sign up, we did not receive enough contractual commitments from electric customers to make the project viable. So we will fulfill our obligation to consult with our customers over the next 30 days or so, but this project is not economic, so we’re removing it from the backlog. In both cases, NED and Palmetto, based on all the facts, we believe this is the right outcome for our investors.

“To be specific, the return on the NED project at the level of commitments that we have would be less than 6% unlevered after tax. That’s clearly not viable, and we are far better off having that cash available for other uses, whether that’s continued and even accelerated delevering, other investment opportunities or returning value to shareholders.”

KMI said the insufficient contracted capacity on NED’s market path was due to several factors.They include the fact that the New England states have not yet established regulatory procedures to facilitate binding EDC commitments, that the process in each state for establishing such procedures is open-ended and that the ultimate success of those processes is not assured.

At the supply end of the pipeline, the depressed commodity price environment has made it too challenging for producers to step up for capacity on NED as well, KMI said.

TGP will continue to work with customers on alternatives to address New England’s natural gas needs, particularly those of LDCs, KMI said.