FERC Commissioner Tony Clark, who announced earlier this year that he would not seek reappointment when his term ended on June 30, said Thursday that he would leave the regulatory agency following the scheduled Sept. 22 business meeting. 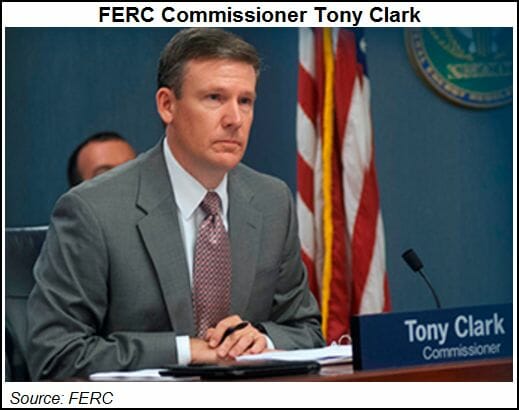 “After four-plus years on FERC, I’m announcing today that the September Commission meeting will be my last,” Clark said in the first of three related Tweets.

“Since June 30 I’ve been serving in an expired term (as allowed by law) and had previously announced I wouldn’t request reappointment.

“Public service has been an honor, but these aren’t meant to be forever jobs. Looking forward to next chapter, whatever that may be.”

Clark first announced that he would not seek reappointment in January, during FERC’s first business meeting of the year (see Daily GPI, Jan. 21).

A former chairman of the North Dakota Public Service Commission (PSC), Clark was nominated to FERC by President Obama and was sworn in to fill a Republican seat at the Commission in 2012 (see Daily GPI, June 18, 2012). He was nominated to serve the balance of the term that was vacated by former Commissioner Marc Spitzer. He is a past president of the National Association of Regulatory Utility Commissioners and served in the North Dakota House of Representatives from 1994 to 1997.

When he came to FERC, Clark said he would focus on manipulation and abuse in energy markets in order to create a more attractive investment climate for infrastructure developers (see Daily GPI, Dec. 3, 2012). He argued that states are better equipped to oversee the regulation of hydraulic fracturing than the federal government (see Shale Daily, May 1, 2013) and was involved in the Commission’s wrangling over jurisdictional overlap with the Commodity Futures Trading Commission (see Daily GPI, March 21, 2013).

Last year another Republican, Commissioner Philip Moeller, resigned from the regulatory agency (see Daily GPI, Oct. 6, 2015). With Clark’s exit, FERC, which can have as many as five commissioners, will have only three, all of them Democrats: Chairman Norman Bay, Commissioner Cheryl LaFleur and Commissioner Colette Honorable.

The last time the number of FERC Commissioners fell to three was in late 2009, when Suedeen Kelly left, and lasted until early 2010, when John Norris arrived at the Commission, joining Jon Wellinghoff, Phil Moeller and Marc Spitzer (see Daily GPI, Jan 11, 2010; Dec. 23, 2009).