Unseasonably warm weather combined with weak holiday demand to drive natural gas prices much lower for the Dec. 23-27 week. Driven by a substantial sell-off in the Northeast, and notable declines in West Texas, the NGI Weekly Spot Gas National Avg. plunged 84.5 cents to $2.085. 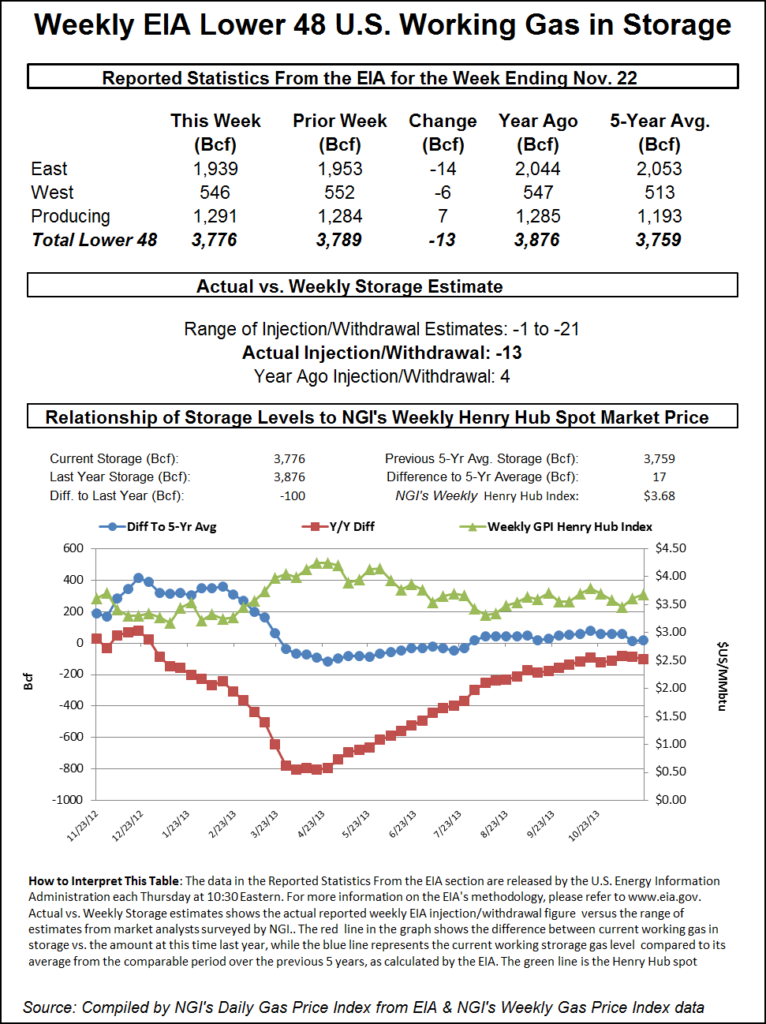 With highs nearing 60 in Boston this week and Texans sporting tanks and flip flops, natural gas prices joined Santa in heading down the chimney this Christmas Week. Strong high pressure continued to dominate much of the United States, with above-average temperatures seen across most of the country. The West remained unsettled, with rain and snow showers continuing the pattern that has been prevalent throughout the winter so far.

Genscape Inc.’s preliminary estimate of Christmas Day demand was 83.8 Bcf/d, which although was likely revised following incorporation of later cycle data, it appeared to represent a decline of about 17% to the prior seven-day average.

“While that is a much larger decline than last year, it is in line with a broader history set,” Genscape senior natural gas analyst Rick Margolin said. “Last year, Christmas Day demand fell just 4%. Not only were temperatures colder than the prior week, but the holiday fell on a Tuesday, so the preceding seven-day average contained a full weekend and the subsequent Monday in which it was likely many businesses and schools were not operating.”

As for weekly prices, the Northeast posted the most substantial declines as the National Weather Service (NWS) called for “relatively dry and mild conditions” across regions east of the Rockies. With daytime highs in New York City soaring close to 15 degrees above normal, Transco Zone 6-NY prices for the Dec. 23-27 period averaged only a few pennies above $2 at $2.03, a drop of $1.955 week/week.

Steeper declines were seen in New England, where Algonquin Citygate tumbled $6.85 on the week to average $2.980.

Appalachia prices were also lower, but losses were capped at around 35 cents at the majority of market hubs. Points along Texas Eastern Transmission (Tetco) were the exception as the pipeline’s Delmont outage was set to be lifted on Saturday.

In a recent notice, Tetco said a full return to service was expected after an additional Entriken outage to repair a separate issue. According to the pipeline, this would minimize the likelihood of an unplanned outage later this winter.

A status update for Line 19 between Bechtelsville and Lambertville is expected around Dec. 30, which will increase delivery capacity to the end of the line by roughly 150 MMcf/d, according to Genscape.

Other notable losses were seen in West Texas, where the lack of downstream demand and a persistent glut of supply sent prices back into negative territory this week, a level not seen since August. Waha traded as low as minus 75.0 cents but averaged the week at 47.5 cents, a drop of $1.130 week/week.

Even Western markets posted sharp decreases despite the stormy weather pattern in the region. Malin was down 23.0 cents week/week to average $3.055.

With warm weather dominating December and forecasts painting an increasingly mild pattern for January, natural gas futures spent the better part of the week in the red.

The latest forecasts continue to show some cold across the Midwest and Northeast for the final two days of the year, “just not very cold,” according to NatGasWeather. Furthermore, the blast of chilly air is expected to be followed quickly by much milder weather that is seen lasting through Jan. 5.

Although the American and European weather models had been at odds over the projected demand in the long-range outlooks, the two models are now close together on the 15-day forecast, according to NatGasWeather. Nevertheless, “it doesn’t change the fact that the overall pattern is still quite bearish other than the Jan. 6-8 cold shot.”

As such, the weather data would need to show cold lasting into Jan. 9-11 across the northern part of the country to help the bullish case, “because if it doesn’t, then heating degree days (HDD) will drop right back below normal at the end of the 15-day forecast once the markets reopen,” NatGasWeather said.

January futures tumbled about 11 cents to start off the week, and then lost another 4 cents on Tuesday. When futures traders returned from the Christmas break, a temporary colder shift in weather models sent futures surging by more than a dime, although market observers quickly jumped on other non-weather factors as the reason for the rally.

NatGasWeather pointed to the looming expiration of the January Nymex contract, with speculators still heavily short. The firm also said a technical or seasonal bounce could have aided the bounce, or players expecting a bullish storage report since the previous week’s Energy Information Administration (EIA) report suggested the supply/demand balance had tightened in recent weeks.

The EIA on Friday delivered on the bullish storage data, reporting a monstrous 161 Bcf pull from storage inventories for the week ending Dec. 20, easily beating estimates that clustered around a withdrawal in the upper 140s Bcf.

Broken down by region, the Midwest withdrew a stout 50 Bcf draw from storage, and the South Central pulled 48 Bcf out of storage, including a 37 Bcf draw from nonsalt facilities and a 10 Bcf draw from salts, EIA said. The East reported a 42 Bcf withdrawal, and the Pacific posted a 13 Bcf pull.

Het Shah, managing director of The Desk’s industry platform Enelyst.com, said weak Henry Hub cash pricing “is keeping the salts from drawing” in the South Central, “until late season, when they’ll all draw uneconomically. It could be a bloodbath in March.”

The hefty cumulative 161 Bcf draw tightened up the year/year storage overhang by 100 Bcf and expanded the deficit to the five-year average by 60 Bcf. Total working gas in storage as of Dec. 20 stood at 3,250 Bcf, 518 Bcf higher than last year at this time and 69 Bcf below the five-year average, according to EIA.

Despite the supportive storage data, bulls struggled to gain any momentum. The January Nymex futures contract went on to expire Friday at $2.158, down 13.6 cents day/day and off 5.6 cents from the Dec. 22 settle. February, which takes over the prompt-month position on Monday, ended the week at $2.231, off 5.4 cents on the day but up 1.4 cents from Dec. 22.

Mild temperatures and light weekend demand combined to send spot gas prices sharply lower on Friday, with prices across much of the country sinking below $2 for gas delivered through Monday, Dec. 30.

Benchmark Henry Hub gas averaged $1.820, down 26.5 cents from Thursday’s average. Similarly steep losses were seen throughout South Louisiana, Texas and across the Southeast.

The sharp retreat seen in prices across South Texas could be partially attributed to lower exports to Mexico. Genscape Inc. said exports to Mexico have plummeted beyond expectations in recent days on unplanned maintenance. The firm had expected exports to fall by about 1 Bcf/d starting with the Christmas holiday and lasting through New Year’s Day, as is typical this time of year.

“However, on Christmas Day, exports sank to just 3,774 MMcf/d, about 1.5 Bcf/d below the prior 30-day average. And the lowest single-day level since April, when maintenance on the Los Ramones system cut South Texas exports by more than 60% for two days,” Genscape senior natural gas analyst Rick Margolin said.

The recent declines on Christmas were exaggerated by an “unplanned operational upset” on the new Sur de Texas-Tuxpan pipeline at its interconnect with the Sistrangas system at Monte Grande, according to Genscape. Flows on Sur de Texas dropped to 368 MMcf/d on Christmas after having averaged 764 MMcf/d in the prior 30 days.

Margolin said TC Energy Corp., the operator of Sur de Texas, indicated the line had to be vented because of overpressure, but no one was hurt and the repairs were completed.

Total U.S.-to-Mexico exports for Friday were estimated at 4,524 MMcf/d, which was more in line with Genscape’s expectations based on normal (albeit seasonal) operations.

After trading as low as 10.0 cents on Thursday, Waha spot gas traded Friday for delivery through Monday plunged as low as minus 75.0 cents. Prices went on to average minus 14.0 cents, down 41.0 cents day/day.

Out West, the messy weather pattern was set to continue, and prices rose accordingly. Gains were mostly small at less than a dime, although a handful of pricing hubs notched much larger increases.

On the opposite coast, a couple of Northeast points sank below $2, while some markets in New England hung on by a thread. Transco Zone 6-NY spot gas for delivery through Monday dropped 19.0 cents to $1.765. Algonquin Citygate tumbled 21.0 cents to $2.005.