The Tuscaloosa Marine Shale (TMS) in Mississippi and Louisiana has the potential to “become the next best thing in U.S. oil production” due to its proximity to pipelines and refineries on the Gulf Coast, but exploration and production (E&P) companies will need to overcome the play’s challenges to be successful, according to a consultant. 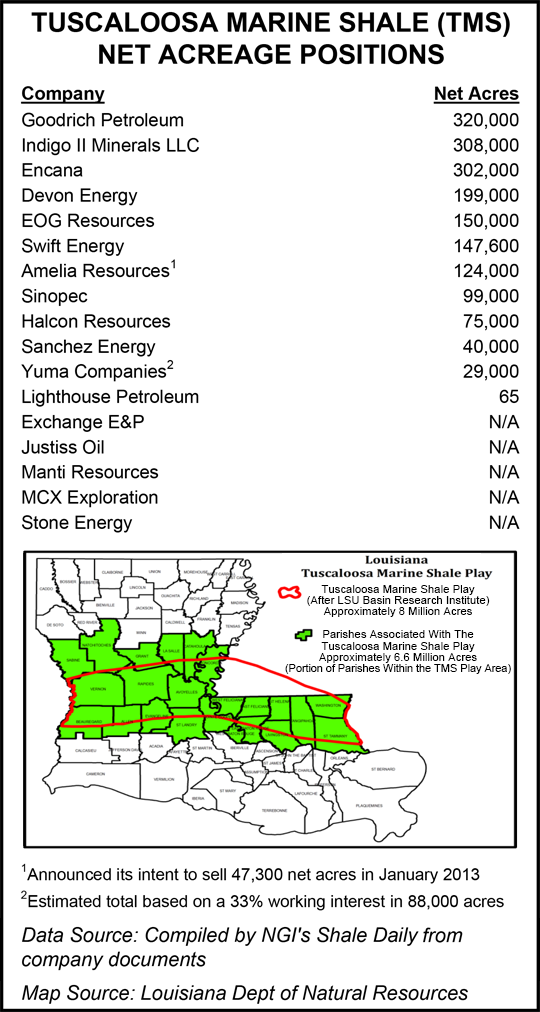 “As in most plays, there is a significant learning curve in TMS as drillers come to better understand the characteristics of the formation, and what works and what doesn’t in maximizing a well’s output,” said RBN Energy LLC’s Housely Carr. “Thanks to data-sharing agreements among the TMS players, the learning curve is shorter than it might otherwise have been.”

According to Carr, some of the lessons learned by E&Ps to date include the benefits of longer laterals, and completions that use more sand, clay stabilizers and proppant. Combined, the ingredients help prevent the softer rock found in the TMS from self-sealing.

Carr cited recent data from Sanchez Energy Corp., which reported 24-hour initial production (IP) rates at 18 wells drilled during a 20-month period ranging from 35 boe to 1,540 boe, averaging just under 700 boe. The 30-day rates for wells that had been in production for at least five months ranged from 85 boe/d to 1,137 boe/d, for an average of 613 boe/d. The cumulative output for at least two of the 18 wells topped 100,000 boe by July 1.

“The now-common expectation among those active in TMS is that the expected ultimate recovery [EUR] for most wells is between 400,000 and 800,000 boe, with many in the upper half of that range with flat declining curves,” Carr said. He added that one well, Goodrich Petroleum Corp.’s Crosby 12H-1, has been performing better than its 800,000 EUR, producing at a rate of 250 boe/d with a very flat decline curve.

“Drillers believe that as they continue to fine-tune their completion formulas the number of Crosby-like success stories will increase,” Carr said.

Eight of the 18 wells studied by Sanchez were operated by Encana Corp., the leading TMS operator, while Devon Energy Corp. had seven wells, and EOG Resources Inc. and Goodrich each had one. The wells entered production between the fall of 2011 and the summer of 2013.

Carr said the E&Ps were also successfully reducing TMS drilling and completion costs from about $20 million/well in the early days of development to under $15 million today. He said the companies are looking to reduce the costs even further, to as low as $9 million by late 2014 or early 2015.

“The reductions are achieved through several means, among them multi-well pad drilling, improved completion practices, and increased competition among service companies as the TMS catches on,” Carr said. “The economics of a 600,000 or 800,000 EUR well that costs only $10 million to drill and complete are compelling: internal rates of return [IRR] of 38% to 80% at oil prices of $80/bbl and IRRs of 70% to 140% at oil prices of $100/bbl.”

Carr said it remains to be seen whether the TMS will make the grade for E&Ps, but the success or failure of the next 20-40 wells drilled and completed will be a big indicator, as will the decline curves from the 18 existing wells. He predicted that 2014 may be the “break-out year” for the TMS.

“The play has other positives that could prod it along, too,” Carr said. “TMS doesn’t just offer significant amounts of oil at a time when the oil-to-natural-gas price ratio is so favorable; it offers it in a region flush with water, spitting distance from major terminals and refiners, and eager to encourage drilling through tax credits and low taxes.”

Goodrich currently has two rigs deployed in the TMS. Last month, the company announced that it would deploy three more rigs to the play by the end of 2014, and would spend $300 million of its $375 million budget for capital expenditures (capex) in 2014 to drill and complete wells in the TMS (see Shale Daily, Oct. 16).

McSpirit said Goodrich’s Crosby well “remains the standout producer,” and added that analysts would be watching how the company’s Huff 18-7H #1 well in Amite County, MS, would ultimately perform.

According to a corporate presentation on the TMS this month, Goodrich said it owns a 7% working interest (WI) on three Encana wells in Amite County — Anderson 17H #1, #2 and #3 — which have all recently entered production. Goodrich also reported owning a 20% WI in Encana’s Ash 31-2H well, also in Amite County (see Shale Daily, Aug. 28; May 10).

Earlier this month, Encana announced that it would spend $200-300 million, and deploy one to three rigs in the play in 2014 to determine its commercial viability (see Shale Daily, Nov. 5).

Sanchez entered the TMS in August, acquiring about 40,000 net undeveloped acres in the core through agreements valued at $78 million (see Shale Daily, Aug. 9). The company plans to begin a drilling program in2014 and also participate in several nonoperated wells.